It’s Retro! – The Terror Within 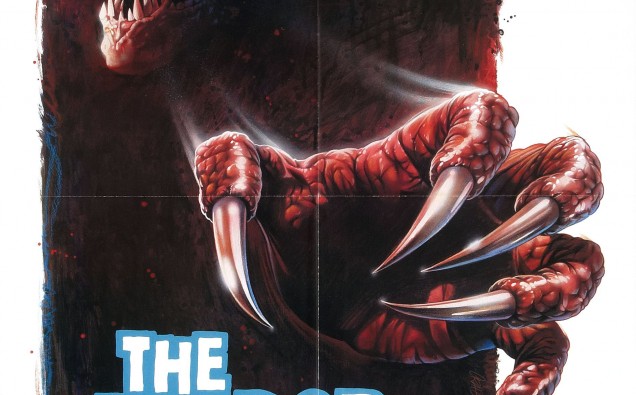 The ‘80s were full of phenomenal films, as we all know. From horror classics like Return of the Living Dead & Evil Dead 2 to sci-fi gems such as Aliens & The Terminator, there was no shortage of great cinema to grace the public’s eyes. However, we can’t forget about the little movies that dominated the shelves of rental stores everywhere, & how they fit snugly into our VHS players on lazy Friday nights. I’m acting like I know what that’s like, but I was actually born in 1993, though the sentiment remains the same. Enough about me, though. What all of you want to know is what flick I’ve chosen to talk about today, & in what ways I can see the hidden light within that shines past all of it flaws. Well…ahem…this…this movie…Okay, let me go ahead & give a trigger warning before continuing. The film in question is the creature feature known as The Terror Within.

Before I get into the flesh & guts of this beast, allow me to explain what the mindset was when creating this film. You see, throughout the ‘80s (as well as part of the ‘70s), B-movie legend Roger Corman (who is responsible of starting the career of Jack Nicholson, Sylvester Stallone, & many others) discovered that there was a decent size market of viewers that wanted to see women in distressful situations. These situations included being topless while being chased by a crazed maniac, being topless when chased by a subterranean monster, being topless while being chased by slimy alien; all those kind of “unique” situations. While this was all well & good, Corman took it one step further. Starting with Humanoids from the Deep (which was produced by Corman),  he began to exploit the idea of women not only being stalked by horrible monstrosities, but also being…well…”ravaged” by them as well. Yeah, I can sense how uncomfortable you are right now. Despite the unusual (& what some may call disgusting) subject manner, the film became a cult hit, paving the way for other similar “themed” cult films like Galaxy of Terror, Inseminoid, Xtro, & The Terror Within (of course). I was really hesitant to talk about this movie due to the subject matter…but if not me, then who? So I’m biting the bullet & digging in. Please don’t judge me too harshly.

The Terror Within was made in 1989, right at the end of the ‘80s. This was back when B-movies still had something resembling a budget with practical effects, actual set pieces, & (sometimes) actors that actually try to be believable characters. Today, it’s all cheap CGI & people that act like they never seen a script before in their life, which very well may be the case as far as the film studio known as The Asylum goes. Back to the point, The Terror Within actually looks like it had work put into it, which I can respect. It stars Andrew Stevens (Day of the Animals, Night Eyes) & Academy Award winning actor (wow, really?) George Kennedy of Cool Hand Luke & Naked Gun fame. They both do a pretty good job with what’s given to them, & create enjoyable characters to watch throughout the story.

The story is not that unique, although it’s not really trying to be, so I can’t fault it for that. Basically, an accident involving a chemical warfare experiment kills most of the world’s population sometime in the near future. A small percentage of humans survived the attack & attempt to survive in this apocalyptic wasteland, while others were mutated into horrible abominations known as “Gargoyles”. We then follow a group of scientists stationed in a lab in the Mojave Desert as they scour the land in search of survivors. After losing several of their party & fight off a Gargoyle, they discover a woman survivor & take her back to the lab. After running some tests on her, they discover she’s pregnant. Seeing that she’s about to go into labor, they prep her up for the miracle of childbirth only to have a baby monster burst from her stomach & run into the vents. In a similar (albeit less subtle) fashion of Alien, the crew deduces that the woman was “impregnated” by a Gargoyle…I’m sure you can put together how that happen. Armed with makeshift weaponry & Brutus the dog (easily the best character), they begin to hunt the beast, hoping to kill it before it fully matures. Unfortunately for them, these things grow fast, & are always on the search for something to tear apart. As I said, not the most unique story, but it’s good for what it is.

The Gargoyle itself falls into a love it or hate it situation. Yes, it’s obviously cheaply made costume, but it’s a very well-crafted cheaply made costume. As far as looking terrifying goes, it does the job. From its grotesque jaws, torn apart skin, & disturbingly human-like eyes, the Gargoyle looks like something out of a nightmare. Seeing this monster move around through vents definitely sends some chills down my spine. It’s not the peak of ‘80s practical monster effects, but it’s a good effort none the less. The design of the Gargoyle is definitely the biggest highlight of this whole deal. Roger Corman must have been impressed with it because I’m pretty sure the costume was used again in Watchers II (1990). The rest of the effects of the film are pretty decent, nothing to go running home about. Classic blood & gore effects, which is always fun to watch. I have to admit, though, the effects used in the scene involving a giant fan were pretty appealing to the eye.

The acting is acceptable, everyone doing their part effectively. If I had to choose the best actor of the bunch, it would definitely be Terri Treas (Deathstalker III, The Nest). She does a great job acting like the concerned doctor doing her best to save everybody from the horrible fate of mutilation, & generally seems distraught when she fails. I also have to hand it to Starr Andreeff (Dance of the Damned, General Hospital), who is the “lucky” lady who gets violated by the Gargoyle. It couldn’t have been an easy scene to act in, & even though not much was shown, I commend her for sticking through such an unsettling situation. Also, props to the dog that portrayed Brutus. Not only does he hurt the monster, but he survives the entire ordeal.

In conclusion, this movie is not only a rip-off of Alien, but also of Corman’s own Humanoids from the Deep (monsters mating with human women, baby monster bursting out of stomach, etc.). It’s an exploitative B-movie meant for people who don’t care about high production costs or well-made plots…& I love it. Unlike similar movies before it, the whole “monster mating” thing was a means to an end, used to move the story along (like in Alien) instead of being there solely for exploitation (Humanoids from the Deep). The monster design is really effective, & the film is enjoyable enough to watch without being disappointed or bored. To be quite honest, this is probably my favorite low-budget creature feature from the ‘80s. If you can get pass the uneasy subject matter, or are just not bothered by it in general, I definitely recommend giving The Terror Within a viewing. Especially as part of a double-feature on a rainy night with a tub of popcorn, bags of candy, & gallons of soda. I love rainy nights.