Hey Everyone! Tonjia Atomic here, inviting you to join us for a listen to the 2018 podcast series, Jackey’s Hand of Horror. 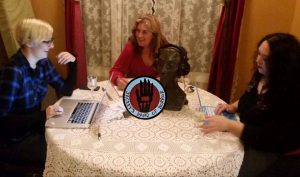 In the first episode, we talk about creepy puppets, creepy puppet movies, giant puppets, and walk listeners through a simple puppet tutorial on the first episode of Jackey’s Hand of Horror podcast. Join Jackey Neyman Jones, Rachel Jackson, and I for an exploration of puppets. We are joined by our very special guest, Mike Senna, builder of the famous remote control robot versions of R2-D2, Wall-E, and BB-8.

About Jackey Neyman Jones and Jackey’s Hand of Horror

Jackey’s hand of horror was a horror-themed podcast from Jackey Neyman Jones that played throughout 2018. You probably know Jackey Neyman Jones for her role as Debbie, the little girl from Manos the Hands of Fate. Of late, she has been involved in many creative projects including the sequel that I directed, Manos Returns. She also paints, designs t-shirts, has written an autobiography, and is going to be featured in an upcoming webcomic. The podcast features five segments corresponding to the five fingers on a human hand. The segments include movie trailer reviews, DIY how-tos, special guest interviews, things we love, and a short review by Jackey’s granddaughter Araydia. Jackey’s Hand of Horror is anywhere from light to heavier discussion with a focus on horror, art, and creativity.

Neyman Jones says of the podcast, “Jackey’s Hand of Horror was created initially as an experiment in a new platform.  I had interviewed for many podcasts over the years due of my notoriety as Debbie from the cult film Manos The Hands of Fate, but as an artist of many mediums, I am generally visually creative.  In teaming up with Tonjia Atomic, Rachel Jackson Nuria Aguilar, and my 10-year-old granddaughter Araydia as co-hosts, Quinn Keating as editor, and support from The MST Revival League Podcast, we have 10 episodes on subjects ranging from Spiders to Burlesque and Zombie Animals, and we are having a blast.” 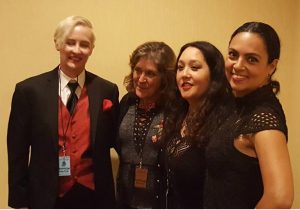 Thanks so much for joining us!

Listen to archived episodes of Jackey’s Hand of Horror on the following: