A fun and entertaining comedy/horror film. 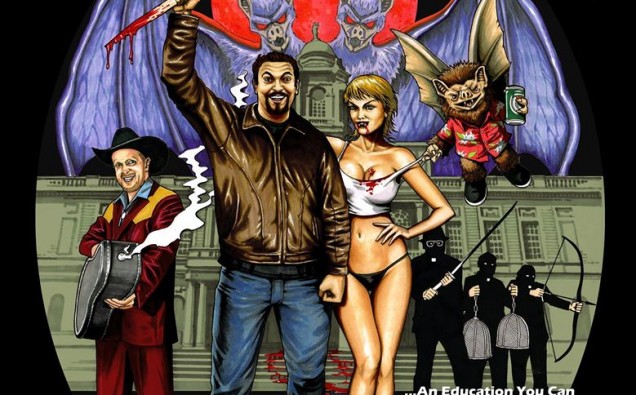 With loads and loads of indie horror titles released every year in this day and age, it’s gotten really hard to keep up. There are still a plethora of well-known indie horror names whose work (I’m kinda ashamed to admit) I still haven’t seen. That was the case for James Balsamo, up until recently when he was kind enough to send us a screener of Bite School for review. I didn’t really know what to expect from this one, but I was excited to check it out after hearing some stuff about it through the web. After having the chance to check this one out, I gotta say…I’m definitely glad I did. 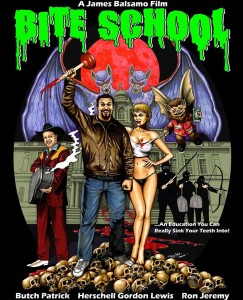 Promotional material for the film.

Back in the day, films like Nosferatu and Dracula put vampires on the map as being legitimately scary. In the twenty-first century, however, vampires simply are not in any way still meant to be scary (I’d say this is probably due to the Twilight films), so hence this being a horror comedy. I don’t know if Balsamo has ever been compared to Chris Lamartina before, but this film reminded me a lot of Lamartina’s work. Just like any film Chris Lamartina puts out, this film is filled with outrageous dialogue, loads of topless women, and a really awesome metal soundtrack.

After seeing the promotional material for this film, one could assume this would be a fun horror comedy film – and that’s exactly what this was. Balsamo stars in the film as Tony Canoni, a man on a mission to get his GED (and a huge sum of money) after his grandfather cuts him off from his inheritance money. Balsamo’s acting is pretty on point, as he definitely seems to have embraced this role. During the entire time he was on screen, I kept feeling as though he was having a really good time making this film. The way he delivers his lines kinda reminds me of Josh Peck, and I say that in the absolute best way possible. 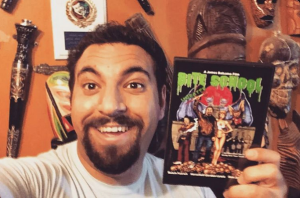 Director James Balsamo takes a pic with a DVD copy of the film.

If horror comedies are your type of thing, this is definitely a film that’s worth checking out. The humor in this film isn’t necessarily the most mature by any means, but the humor works for the most part. Bite School succeeds in the fact that it never takes itself too seriously, and focuses solely on delivering sheer entertainment. The film doesn’t have much music score, but has an incredible soundtrack that adds a lot to the overall entertainment value. This is a fun watch, and I recommend it to anyone who is a fan of low-budget horror comedies. If you’ve been on the fence about this one, don’t be – pick up a copy sometime soon.