Jason Goes 3D: A Look Back at Friday the 13th Part III

Machetes and Yoyos in a Whole New Dimension 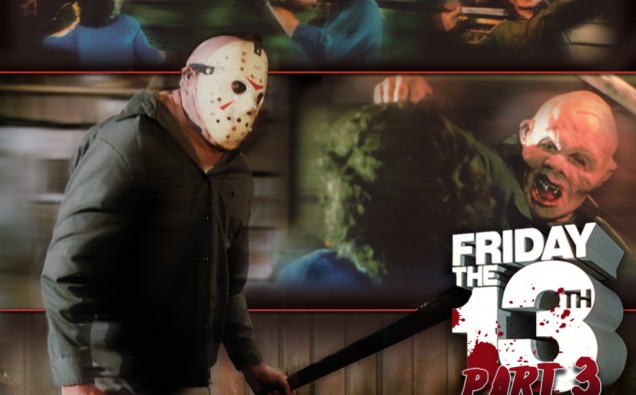 Welcome back to our coverage on Friday the 13th. This time we’ll be taking a look back at part 3, where Jason gets his hockey mask and the subpar 3d effects nearly gave me one of the worst headache of my life. This is 1982’s Friday the 13th Part 3.

Starting off my look back on today’s film I was in a bit of a tight spot. Friday the 13th Part 3 is in 3D, and having bought my box-set of the Friday films used, I lacked the required glasses. Thankfully after a few minutes of fishing around I came across an old pair of Sharkboy and Lava Girl specs, and as completely stupid as I looked wearing them, they worked. 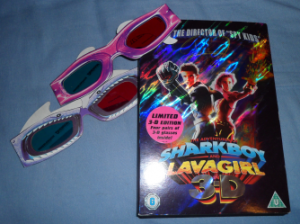 All my efforts were for waste however, as it only took twenty minutes before the primitive third dimensional effects gave me a rip-roaring headache. Maybe it was my crappy tv, the substandard glasses, or just the flat out ugly blue-red color scheme, but every scene of 3D felt like a machete between the eyes. Avatar this film is not. Hell, it aint even Shark Boy and goddamn Lava Girl. Say what you will about the overindulgence of 3D in film today at least it didn’t give you a brain aneurysm like back in the 80’s.

Turning off the 3D effects subsided my headache, and did alot to make Friday Part 3 more enjoyable. Set the day after Part 2 (making this, uh, Saturday the 14th?), Part 3 stands out for its strange characters (including the most 80’s motorcycle gang of all time), disco soundtrack, and the introduction of Jasons most iconic feature; the hockey mask.

Thats right kiddos, three movies in and only now are we seeing the famous headware. Stolen off screen from the fat, juggling goofball Shelley, the hockey mask is completely perfect. From the moments Jason puts it on, its a match made in slasher heaven.

Why is it though that the two connect so well? Id have to say its the simplicity of the mask. How many Jason Voorhees do you see every Halloween? Im guessing alot, because it is such an easy costume to construct. All you need is a hockey mask, a hunting jacket, a fake blade dripping blood ,and your good to go.

Look at Leatherface in comparison. Badass as he is, a mask made of human skin isnt something your average joe is likely to sew up on a rainy afternoon. But anybody could go out and buy a hockey mask. Hell, they sell them for $10 at Walmart. The universality of this fear, that any maniac could be behind that mask, is whats kept Jason up and swinging his machete all these years.

Introducing the mask aside though, what else does Friday Part 3 have to offer? Well, for one, tons and tons of dated ass 3D shots. Fruit is juggled, yo-yos are spun, and eyeballs get popped from sockets in more than a handful of distracting and cheesy looking scenes. This all probably would have been alot more tolerable had the 3D not been migraine inducing garbage, but it is what it is.

That’s not to say there isn’t merit to be had here. Richard Brooker, a former trapese artist, makes for a physically intresting Jason, and there are a couple gnarly kills (the arrow to the eyesocket and handstand Andy getting a machete between the legs are my favorite). Jason really gets a chance to shine as well,  more than in Part 2 even if without the hockey mask he kind of looks like Sloth from the Goonies. 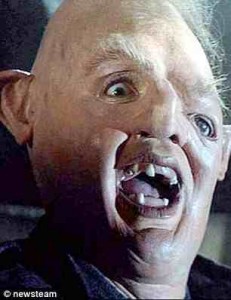 Despite these being his pre-undead days, Jason’s strength is enourmous. Capable of knocking out grown men with a single punch and bursting heads Game Of Thrones style with his bare hands, this isn’t a motherfucker your going to want to go toe to toe with in a fight.

Despite these relative strengths, if you took out Jason getting his mask and the horse poop 3D, this is one of the more forgettable of Friday films. But even if it’s only standard slasher fare, Part 3 is a pretty good time as just about anything with old Vorhees tends to be. It’s worth giving a watch; but for gods sake, please dont turn on the damn 3D.

Jeff is a writer for The Blood Shed and eats, drinks, and bleeds horror. You can help surrport his first book here.