Jason vs Michael is never happening. Here’s why.

Slashers are kinda like superheroes in a lot of ways. Strange power, garish costumes, secret origins. Is it any wonder people are constantly arguing who could beat who and... 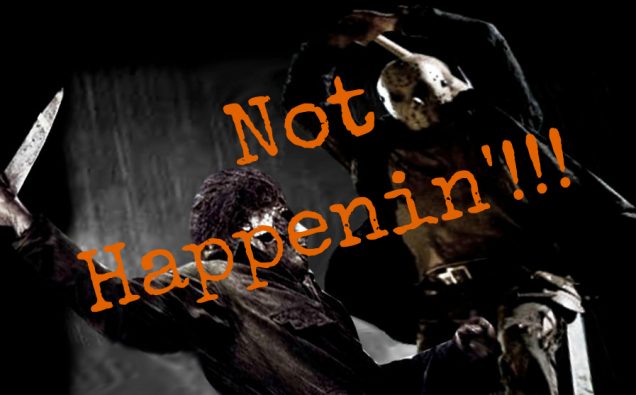 Slashers are kinda like superheroes in a lot of ways. Strange power, garish costumes, secret origins. Is it any wonder people are constantly arguing who could beat who and begging to see their favorites meet up? We got to see Freddy fight Jason finally. But the big fight everyone seems to want to see most is Jason Voorhees taking on Michael Myers. I mean, I can see why. As far as fights go, it’s a fairly even match. Both are nigh-immortal, super strong, silent killing machines. Unfortunately, though I would be first in line at the theater to watch it, it’s just not in the cards and people need to stop being duped by every rumor that comes down the line. It’s not happening. Period. Why?

I mentioned Freddy vs Jason already. It happened. Finally. But it took almost 20 years. Why? Because at the time that the idea came about, Jason was owned by Paramount and Freddy was owned by New Line. It took Friday the 13th VIII underperforming to convince Paramount to sell Jason (though, interestingly, not the Friday the 13th title rights) to New Line, paving the way for the crossover to finally happen. Since then, Jason has reverted to Paramount (a situation that will, in part, prevent a Freddy vs Jason 2, a subject I go into in great depth in this article). Micheal has been owned by Dimension almost since the beginning of the franchise, although this has recently changed. Even then, I don’t see any indication of Paramount being the one to pick him up. And without being under the same studio, a crossover is nearly impossible. A crossover film between licensed characters from two separate studios has, to my knowledge, never happened and probably never will. Freddy vs Jason? Both New Line at the time. Alien vs Predator? Fox. Puppet Master vs Demonic Toys? Full Moon (though the crossover filming duties were licensed out). It just doesn’t happen.

2. Michael must be kept “pure”

But say that the unlikely happened and Michael did end up at Paramount. Well, there are still other rights involved (the Akkad’s still have a huge say in Michael’s rights) and those folks want Michael kept “pure”. As in, no crossovers. If a crossover were ever possible, it would have been in comic form when Michael Myers’ comic rights were owned by indie publisher Devil’s Due. They, at the time, also owned the comic rights to Chucky and were running a slasher-centric series called Hack/Slash which crossed over with basically any horror character they could get their hands on (Chucky, Evil Ernie, Edgar Dill, Herbert West, etc). But even then, Cassie Hack never went up against Michael Myers because, even though they were being put out by the same company, the people owning the origin rights said no. No crossovers. Period.

And at the moment, what is there to cross over? Michael Myers now has 3 different continuities (4-6, H20-Resurrection, and those godawful Zombie remakes) and Jason has 2 (original films and remake) and both characters are being reinvented again. What are you crossing over? Michael vs Jason. Ok, which Michael and which Jason? Because right now, their timelines are so screwed up that their franchises honestly need a successful reboot that is actually good enough to spawn new sequels to form a new basis for the characters, new mythologies, otherwise we are just going to see failed reboot after failed reboot every few years. Freddy vs Jason had a combined 16 films (not counting New Nightmare) to build upon and reference. That is not the situation that Jason and Michael are in now.

Want to see Jason vs Michael? Well, you won’t. Not in theaters, not on DVD, not in any official capacity. There are some pretty good fan films out there though to help you scratch that itch. For example, check out this awesome short from Blinky500. It’s the best we can hope to ever see, dear reader. Lucky for us, it’s still pretty damn good.