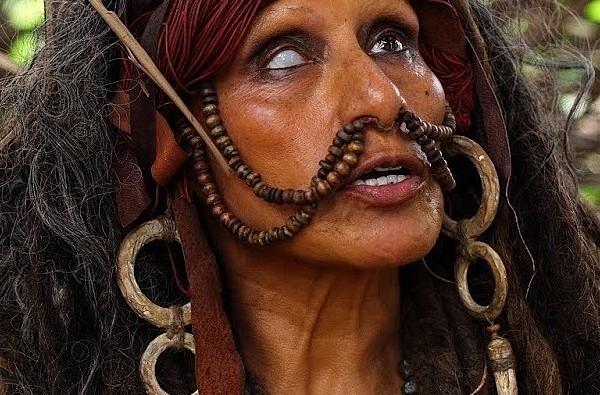 Walking into The Green Inferno there were a few things I expected: to be horrified, to be grossed out, and to swear off meat for at least a month or two. What I didn’t expect was to laugh my ass off. I know I must sound like a morbid mother fucker right now, but damn it, this film is hilarious. Now don’t get me wrong, there’s enough blood here too sate most gorehounds, and plenty of people being gobbled up in various ways. But the witty writing and likable, if typecast, characters help stew up a delicious satire of enitlement, slacktivists, and the general ass hats that are millenials; just one that happens to feature cannibalism, an addition I think would improve any film.

As far as plot goes, The Green Inferno is pretty standard for this kind of movie: entitled white girl Justine and a group of her equally white and entitled friends go to the Amazon with crazy activist and all around nut Alejandro. Their mission: save a local tribe from the big bad bulldozers. But after a plane crash the very amazonian s they set out to help capture them, to be tortured, and ground up into hamburger meat.

The characters are all fairly stock: we have the stoner,the tough lesbian chick, the kindly black man (whose of course, dies first and most painfully) etc: and Al Gore himself would tell Alejandro to calm the fuck down about the goddamn trees.

Honestly though, the broad characterization kind of works. Watching the caged cast members slowly being picked out one by one to become the next course is exhilerating; it reminded me of a time I picked out my own lobster at a fancy seafood place. And generic as they were I actually sort of cared about these guys. Rich dumbasses as they all were, it’s hard to root for these guys oare get eaten. I might not have remembered what the hell his name was, but I was genuinely upset when old whats-his-face died.

But lets face it dudes, no one goes to a cannibal movie for a nuanced character study; they go for all the guts, gore, and exploitative sleaze unavailable anywhere else. And for the most part, Inferno delivers as best as an R-rated film in todays climate can. Although no one moment ever really tops the first poor suckers death (it’s the only scene in the movie that really left me shaken) there’s plenty of sick deaths through out, and the red stained nastiness is plentiful. Hardened genre fans might cringe here and there, but new comers and more sensitive folk will run screaming to the aisles.

What really makes Inferno, and Eli Roth films in general, stand at the head of the splat pack is the dark, horrible, oh-god-I-really-shouldn’t-be-laughing humor. The tone suffers a bit as a result, with scenes of horror being immediately offset with a joke, but like I said before, its just too damn funny to fault the flaws a whole lot. Stoner cannibals with the munchies, elderly cannibal women gossiping as they lovingly season up human meat, little cannibal children playing games with a severed leg; the images are as bizarre as they are laugh inducing. The extras, played by an actual amazon tribe, are clearly having the time of their lives, and for folks who 3 years ago didn’t even know movies existed, their damn fine actors.

For hardcore fans expecting something with the punch of Holocaust or Ferox, The Green Inferno might actually be a bit on the tame side. With the regulations today its impossible to film a movie like the unregulated, life threatening cinema of the 80s, but maybe that’s for the best. As huge a fan as I am of Holocaust (read my look back at that film here) there’s stuff in that flick that just wouldn’t work in today’s market. But for what it is Inferno is a highlarious and frequently quite gory satire, and an awesome return to form for Eli Roth, who has made a name for himself as one of modern horrors most exciting directors. Now im going to head out for a bite to eat. I hear Sawney Bean’s Bbq is pretty good…..