Jessica Cameron talks “All Through the House” 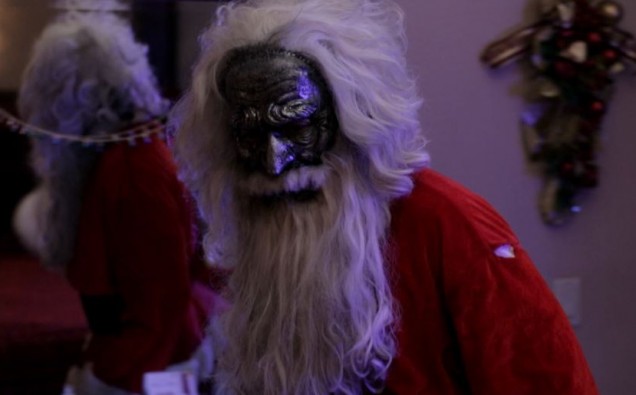 “All Through the House” is an upcoming holiday-themed retro-slasher film from writer/director Todd Nunes. The official plot for the film:

ALL THROUGH THE HOUSE is an 80s-style slasher film featuring a deranged Santa Slayer who rips through the town of Napa, California for some yuletide-terror. Fifteen years ago, a peaceful Christmas neighborhood was engulfed by fear when five-year-old Jamie Garrett was mysteriously taken from her bedroom never to be seen again. Now on Christmas break, Rachel Kimmel comes home from college to find her neighborhood struck again by a reign of terror. A violent killer is hiding behind a grisly Santa mask, leaving a bloody trail of slaughtered women and castrated men to the steps of the Garrett house. Rachel finds herself in a horrifying nightmare as she discovers the twisted secret behind the mask.

I had a chance to talk to scream queen Jessica Cameron, one of the stars of the film, about the project.

John Lepper: Thank you, Jessica, for taking the time for this interview! So, you are starring in upcoming retro-slasher movie “All Through the House”. What can you tell me about it?

Jessica Cameron: Oh, my gosh, this is a love letter to holiday horror films from writer/director Todd Nunes. It’s a fantastic, original script. It doesn’t play into a lot of stereotypes we see in horror. I’m really excited. It’s a really, really strong script, one of the best I’ve ever read. Todd is just such a dedicated… not just a filmmaker, but also a horror fan as well, which really helps to make one hell of a kickass film.

JL: Ok, very cool! Yeah, I took a look at his IMDB. I saw that he had a short film a couple years back called “Here Comes Santa”. I’m guessing this is kinda inspired by his earlier short film.

JC: I’m actually not positive on that because I wasn’t involved in that short film. Not saying yay or nay.

JL: Well, in any case, you gotta love the holiday themed slasher movies. It’s actually a Christmas tradition for me, every Christmas I sit down and watch “Santa’s Slay”. So, maybe this will become my new tradition.

JC: It just might! This film is nothing short of miraculous! It’s a holiday miracle!

JL: LOL. Ok, so, it’s a retro 80’s slasher film, is what I am seeing here. What slasher films would you compare it to from the 80’s as far as style?

JC: You know, I never like to compare. It’s one of those things where it’s really, really hard to compare. What I like to say is that it is just inspired by the 80’s in the plot. I think for me, the one it kinda reminds me of is “Black Christmas”. The original, not the shitty remake. Yeah, this isn’t like the shitty remake. Have no fear! We aren’t fond of it either!

JL: Well, the original was an instant classic, one of the first proto-slashers.

JC: Absolutely! And you know, for me, it’s a really fun film. Sort of in a way that not only Christmas horror can be fun, but also I think kind of like “April Fools”. I don’t know if you’re familiar with that one, but it’s just a horror film that is just fun! It’s entertaining. It keeps the viewer engaged! It’s a really genuinely good film.

JL: Alright, sounds great! What can you tell me about your character in this movie? You’re playing a character named Sheila.

JC: Sheila is a woman who’s just trying to keep it together. She is a mom of a wonderful young son and although she’s not the most responsible mom, she’s honestly doing her best. She’s just trying to make the holidays a pleasant experience for him.

JL: Ok, so, one thing I always ask then I do an interview in regards to a slasher movie. Slasher movies are infamous for their sequels. Is this going to have a sequel, do you know anything about that?

JC: Well, I hope to hell this one does have a sequel. I think this would make one hell of a fun film franchise! It could definitely be the Silent Night of our era.

JL: And we need a new one, because the last few sequels for that were pretty bad.

JC: Yeah, they weren’t particularly strong, now were they?

JL: No, they were not. Now, do you know when we can expect “All Through the House” to be released?

JC: Well, I know that “All Through the House” is looking to be doing its festival run later this year. So, if you’re doing a festival circuit, hopefully you’ll see it playing at a bunch of places.

JL: Ok, any festivals in particular already having accepted or…

JC: Well, I don’t believe we’ve even started to submit yet.

JL: Ok, I gotcha. And what’s the endgame goal? Are we looking at theatrical release, DVD, video on demand…

JC: I think typically with independent films, we’re going for a VOD deal with maybe a limited theatrical release in support as a promotion for the VOD deal. So, I’m certainly hoping, fingers crossed for that. I think it won’t even be a question since this is such a genuinely strong independent film.

JL: Ok, great! That’s what we’re all about here at theblood-shed.com is the indie stuff. Well, let me ask you this. “All Through the House” is out of the way now, I know you have a few more projects coming up. Anything you can tell me about any of those?

JC: Yeah! “Truth or Dare” right now is nearing the end stages of distribution. That’s my really, really fun torture flick that I co-wrote and directed and that I love to death. It’s a lot of fun, so be looking for that on your distribution platform. And on top of that, we actually completed out three-film, cross-country feature extravaganza where we traveled across America making several films. So, we filmed “Mania”, which I directed, “Desolation”, which is a really fun cross-country hitch hiker film that I star in, and “Kill the Production Assistant”, which is a documentary about the process of making all three because it was such a unique concept to travel across America. And then on top of that, I finished “Utero” last year, which I cannot wait for you guys to see. I play a young woman who’s struggling while pregnant because she has come to the conclusion that her baby is a monster. And then, there is another film I star in called “Save Yourself” which is another film that will be making the festival rounds later this year as well. And that’s a movie about 5 female filmmakers who are travelling across America to head to a film festival screening of their latest movie when they encounter a mad scientist.

JC: Right? I don’t know about you, but I don’t think we’ve seen a mad scientist film in far too long. I think it’s long overdue.

JL: Yeah, that’s true. I keep forgetting how long ago that was. Time flies!

JC: Yeah, time flies when you’re having fun! I just think that after 6 years we need to at least see a new one!

JL: Yeah, alright! So, great! Looks like you’ve got a lot of great stuff coming out! So, thank you very much for taking the time for this interview, Jessica!

JC: No worries! My pleasure! Anytime you need anything, just let me know!

JL: Alright! Alright, and I know you have an appointment to get to. Before I let you go, is there anything else you want to let our readers know?

JC: Well, you can find me on social media. Especially Twitter and Facebook! I’m just Jessica Cameron on Facebook and jessicacameron_ on Twitter. You can definitely find me over there. And you know, just continue to support independent films and the passionate filmmakers behind them. I feel like many of them are stronger than the studio films currently being mass produced.

JL: Yeah, I definitely agree there. Hasn’t been too much good horror in theaters lately.

JC: No, and it’s because of the perpetuation of remakes and, you know, making movies for the sake of not losing ownership of a title rather than making a genuinely good film.

JL: I think what it is is they just get stuck in these trends. They hit on one new thing and then they keep making cookie cutters of it for like the next decade trying to cash in on it.

JC: Yeah, and that is absolutely the problem. But the other problem is that people go see it. Which is why I say support independent horror, support originality. It’s not enough to bitch about Hollywood not making what you want. When Hollywood isn’t making what you want, when you give them your money, even if you bitch about it, they are getting your money. And that’s what speaks to them. You really want to hit Hollywood? Don’t go see the new remake. Don’t see that shitty film. Spend your money on independent film where people are making the content you want to see.

JL: Absolutely. I don’t know if you’ve seen our mission statement here, but that’s what we’re trying to do, is just get as many people interested in the independent side of horror as possible. Because it’s so under appreciated it’s a crime!

JC: Oh, absolutely! You’re damn right it is! And now adays it’s never easier to go find whatever it is that you’re passionate about. It’s not like you’re limited to having to go to the theater and sit through one of the ten movies playing. You can go off and find a movie that’s exactly what you want to watch. And it might not have a Hollywood budget or big name cast, but you know if you’re a genuine horror fan, chances are you don’t give a flying fuck either.

JL: I wouldn’t think so.

JC: I can’t tell you the last time I went to a theater to see a movie and cared who was in it, although, statistically, other genres are dependent on that.

JL: Last time I went to a theater, I saw “As Above, So Below”. That one wasn’t horrible, but it wasn’t as good as I was hoping.

JC: I haven’t seen it, but I’ve heard mixed reviews.

JL: Yeah, same. Alright, so, I will let you go. Thank you again for taking the time for this interview, Jessica.