A detective yarn set in the mythos of Lovecraft 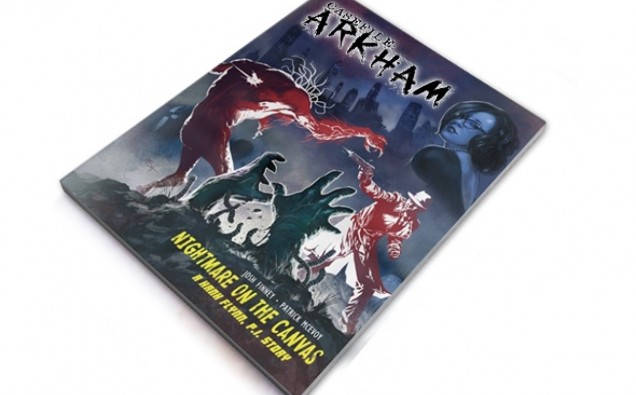 From the team that brought us World War Kaiju now bring us a noir detective comic with a Lovecraftian twist. I sat down to talk about the upcoming comic, titled Casefile: Arkham, with writer Josh I. Finney (World War Kaiju, Titanium Rain, and Utopiates. Also a former illustrator for various DC comics such as Batman and Catwoman) and artist Patrick McEvoy (an artist known for his Lovecraftian pieces, he is known for trading cards, posters, and t-shirts. Best known for Arkham Horror, Call of Cthulhu, and Game of Thrones) to discuss the upcoming book.

John Lepper: Thank you, Patrick and Josh, for taking the time for this interview. You are both putting together a Lovecraftian comic called “Casefile: Arkham”. What can you tell the readers about it?

Patrick McEvoy: Visually, I’m tying to evoke the feeling of old movies – both the noir style of the 1940’s and the earlier German films like “The Cabinet of Dr. Caligari” or “M” or “Metropolis”. I’m also filtering this through my love of old EC and Warren comics – lots of creepy detail, scary shadows and evocative facial expressions. And also the fish thing.

PE: In a nutshell: if you love “Game of Thrones”, you’ll wonder what the hell this is.

JIF: I mean, who doesn’t want hear a fishman-hybrid tell a guy, “Yoooz gonna sleep with the fishes.”

JL: Lol, sounds great! And Patrick, I understand you did some art for Game of Thrones. Very cool! So, am I correct in my assessment that this is a work very heavily inspired by Lovecraft without drawing on any one single story for inspiration? More set in his created universe than a direct adaptation?

PE: Yes I did, thanks! Lots of it, in fact – about 90 cards for the “Game of Thrones” CCG for Fantasy Flight.

JIF: In terms of Casefile: Arkham, it’s more as if we’ve inserted a Chandler-esque Philip Marlow PI into Lovecraft’s world via loose ends, hanging plot threads, and events that are implied to have happened after HPL’s originally stories ended.

PE: I’ve described it as the “Rosencrantz and Guildenstern are Dead” of the Lovecraft universe. Except that it’s DEFINITELY not a comedy. Our hero, Hank Flynn, PI, is walking through the background of HPL’s stories.

So while we are creating a character who lives in the Lovecraft world, he is not from any of his stories. On the other hand, we’ll have references and characters from several of the original Mythos tales.

The first story, for instance, has Flynn following a missing persons case, tracking down a missing artist named Pickman. For HPL fans, the references to Pickman’s Model will be there, but you won’t need any previous knowledge to get into our world.

JIF: I really WANT to give Herbert West a cameo in this stories, but I think I may have to save it for book 2.

JL: I did pick up on the Pickman reference in the synopsis I was sent. Sounds like a great story! Tonally, Lovecraftian stories are usually quite macabre. And stories based on them vary from even more macabre still all the way to, well, I interviewed a man who has adapted them into a series of children’s books last week. Where on the scale is this comic series going to lie? What can you tell me about the tone?

PE: Really, take Film Noir’s bleak outlook and multiply it by Lovecraft’s existential horror, and you’ll get to where we are heading.

JIF: Noir deals quite well with all things dark and bleak. The only difference is unlike Lovecraft’s stories, you’ll be following a character who acts rather than allowing himself to be guided along by the blind hand of fate.

PE: Yes, very good description. He’s been touched by fate, or destiny, but he’s going to fight every step of the way, like all the best Noir detectives.

JL: This sounds like exactly what I would hope for! Excellent! Now, you mentioned a Book 2. How long do you hope for this series to run? Is it going to be an ongoing or a miniseries or maybe even a series of miniseries?

JIF: We’d like to do one book a year. Ideally each book would be a self-contained case.

That’s why we need people to pledge to the campaign right now. So we have the budget to do this story in one-go. none of this “To be continued” stuff.

PE: Yes that’s very important – the closer we get to our stretch goals, the more story we can include at no extra cover price!

And I’ll just expand on Josh’s answer about length – we’d love for this to go on for years if there’s enough interest! It’s a character and world we’d love to visit many times.

JL: Excellent! And I’ll be sure to include the link to the campaign at the bottom of the article. So, overall, what is your best case scenario for this book?

PE: To see our enemies driven before us and to hear the lamentation of their women.

JIF: It becomes a massive hit that causes dump trucks of money to pull up to my house and I can swim in it like Scrooge MacDuck and I don’t need to ever run a Kickstarter again to fun a project. That’s typically the best case scenario. But I’ll just be happy with people enjoying the book.

PE: Yes, the enjoying thing too! We both love to entertain, and that’s the real yardstick.

JL: Lol! Great! Yeah, happy fans are what it’s all about. But money (or the lamentations of your enemies’ women) doesn’t hurt either. Thanks again for taking the time for this interview. Before I let you go, do either of you have anything else you want to tell the readers?

JIF: The campaign ends this Friday, so if you want to get on board with Casefile: Arkham, don’t wait. Also check out our last project together, World War Kaiju!

PE: Our incentives are, without exception, AWESOME! So be sure to check out our Kickstarter to see previews, updates, and all the great incentive stuff you can get. Do it soon! And on a personal note, I’m at www.megaflowgraphics.com, and http://patrickmcevoy.deviantart.com on Deviantart.

And yes, World War Kaiju is quite a project, done in a completely different style both in storytelling and art. In the best of all worlds, we’d do one WWK and one Casefile: Arkham each every year for a while.

JIF: World War Kaiju, and my other works are published by 01Publishing. www.01Publishing.com

JL: Awesome! Well, this sounds like an exciting project! Thanks again for taking the time for the interview and best of luck!

PE: Thank you! It was great chatting.