A fun dark comedy about family! 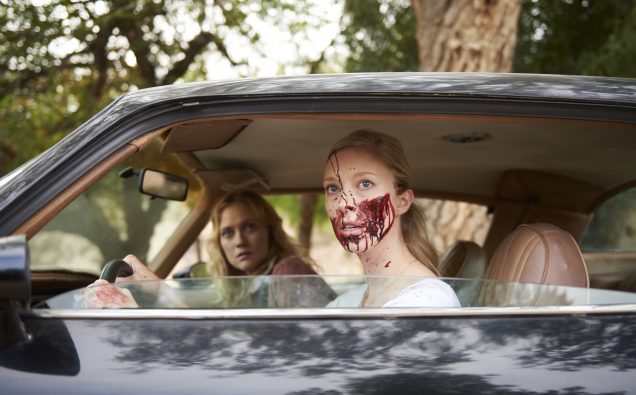 In the horror world, the most famous baseball bat has a name: Lucille. The murderous bat covered in barbed wire, that bad guy Negan carries in The Walking Dead. Now there is another bat to join the club – and its name is Kate!

Killer Kate! is a fun, dark comedy. The film starts out slowly but eventually builds into a comedic thriller that works because of some decent acting. 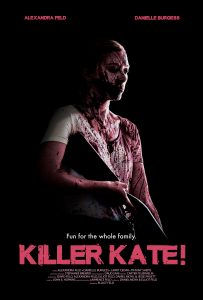 Kate (Alexandra Feld) and Angie (Danelle Burgess) are estranged sisters who haven’t spoken since Angie went to college and left Kate to care for their dying father. Years later, in a show of reconciliation, Angie invites Kate to her bachelorette party held at a remote house booked on a home-sharing app. (of course remote) The women are unaware that by booking this house, they’re walking into a trap set in motion by a disturbed family of amateur killers who are out for blood to right a cosmic wrong. They soon become unwitting participants in a savage and often ridiculous life-or-death struggle that pits family against family, and past against present.

The film was a hit for me because I enjoyed the comedy. It was silly but had good comic timing. The premise of a crazy, but incredibly stupid family renting their house out just to kill the girls as a sort of revenge on Airbnb, was unique. The murder of these young ladies was just to be a statement of sorts. Combining the cabin-in-the-woods style with home-invasion slasher tropes, this parody is a lot of fun if you just take it at face value and don’t try to read anything deep in it.

Director and co-writer Elliot Feld had this to say about Killer Kate!: “Something about the horror genre hooked me at a very young age, and it probably started at a Blockbuster video store. I grew up on my living room floor watching VHS tapes of The Fog, The Exorcist, and The Evil Dead. I love conflict, and horror films are chock full, whether it’s man against man in Scream, man against self like The Fly, or man against the supernatural in The Prince of Darkness. In Killer Kate! we pit family against family. This film was inspired by many of the low budget flicks of the 1970’s & 1980’s. I draw influence from countless directors, but folks like John Carpenter, Sam Raimi, and James Cameron really drive my work. My wife plays the lead, her family tackled art department, and my family handled production, while our closest friends filled out the rest of the team. It was a true family affair. I love them all, and I am extremely proud of everyone on our crew. Killer Kate! is a fun, funny, and violent ride.”

As I said earlier, the film worked for me because of the acting. Some standouts were Alexandra Feld as Kate, Danielle Burgess as her sister and an adorably Grant Lyon who plays the awkward and fearful Jimmy. The girls were able to play some pretty crazy and bloody scenes, totally deadpan. I wonder if there were a lot of laughs in the outtakes! And Jimmy- his character as the reluctant murderer was really the best performance in the film.  Special kudos also to Ashton Jordann Ruiz as the pizza delivery guy. He was pretty funny too, for the short time he was around. In addition, you may recognize scream queen Tiffany Shepis as the one, almost competent, member of the psychotic family. 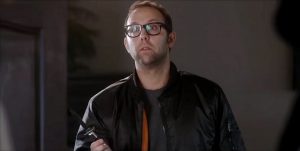 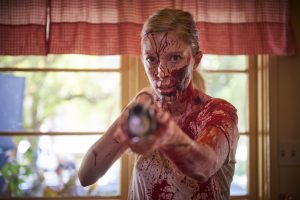 Then of course there is Kate- not the girl- the bat. Kate (the girl) did not fit in well with her sister’s other friends at the bachelorette party, they all had fun nicknames and wanted to party hard. Kate wasn’t much of a partier and they could never come up with a nickname for her that fit. But surprisingly when the shit hits the fan she saves the day!  With a razor wire covered bat with her name on it, now in her hands, she morphs into Killer Kate and finds the perfect nickname, and apparently her purpose in life!

I also have to mention the practical SFX- I loved all the kills, especially with the bat! Just enough gore to satisfy, but not too much to overwhelm the comedy.

Overall Killer Kate! is entertaining, gory and a unique satire flick. The ending may surprise you- it’s not exactly what you think it will be. For fans of revenge films, dark comedies, parodies, and slashers, this is a perfect Halloween film! 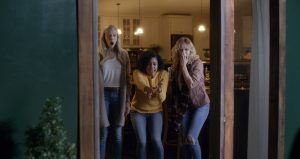