“Fear and weakness keep us here.” 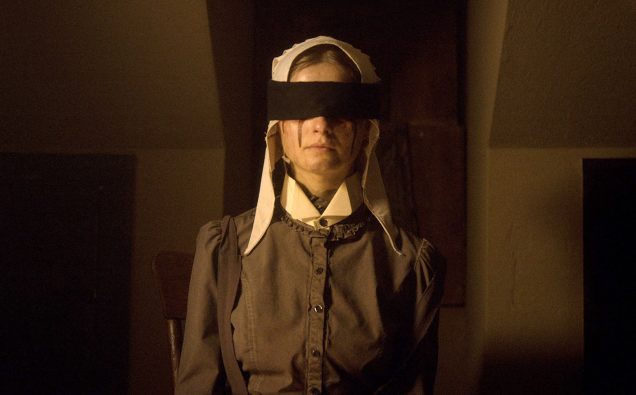 I felt unsettled right down to the pit of my stomach after watching this film. The Last Thing Mary Saw is timely, yet still a historical piece, about forbidden love and how religion can make people resort to violence rather than be tolerant. 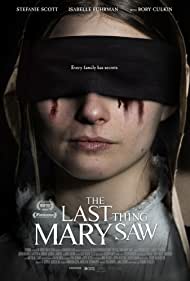 Synopsis: In 1843 a young woman is under investigation following a mysterious death in her family. Her recollection of the events sheds new light on the ageless forces behind the tragedy.

Starting near the end, The Last Thing Mary Saw is very obviously a tale of doom. Mary (Stephanie Scott, who you may remember from Insidious: Chapter 3) is at this point bound and blindfolded, with blood coming from under the bandages. She is in front of a court of town elders who very much want to take her down, but at this point, we don’t know why. These gun-toting men whisper about her consorting with the devil and are obviously terrified of her. The weather is frigid and colorless outside, much like the God-fearing folks who surround her. Writer/director Edoardo Vitaletti assures us right from the beginning, what Mary saw, will be bleak indeed.

Going back in time we discover that Mary is having a relationship with her family’s maid, Eleanor. (Isabelle Fuhrman from Orphan) Of course, this lesbian relationship is looked at as the work of Satan, and a strange book that Mary reads from seems to be a source that brings her a feeling of righteousness about her feelings. 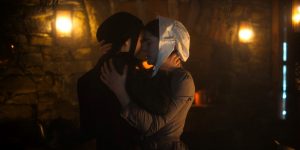 Guilt and judgment rule the oppressive world they live in. Sour faces watch as the girls kneel for hours on rice as punishment. Their love is strong though, and with some help from the family guard, (P.J. Sosko) who is abused by the family himself, they make a pact to meet secretly and in Mary’s eyes, we see a plan for revenge begin. 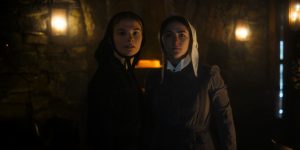 Sadly, this love affair is doomed from the beginning. The house is old and creaky, There is often a devout spying eye looking through every crack and crevice to catch their sins. Mary’s incredibly creepy grandmother who appears to have supernatural powers seems to know all. She is also the spiritual zealot and leader of the family who doles out torture in a dark representation of religious repression.

Judith Roberts, who plays The Matriarch was incredible. I saw her many years ago in Eraserhead and more recently in Dead Silence. At 87 years old, she commanded in her scenes. Ancient evil practically dripped from her every word. She is a horror treasure. 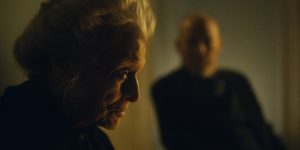 The entrance of an odd intruder (Rory Culkin) brings forth the other end of the sexual spectrum, the representation of everything wrong with the time period. Women being controlled by men, rampant abuse, slavery, and religious repression. His inherent evil makes Mary feel even more trapped in this puritanical house and her unhappy life. Even though he warns that a life away from this house may not be better, she eventually does the unthinkable in her desire for freedom and retribution. 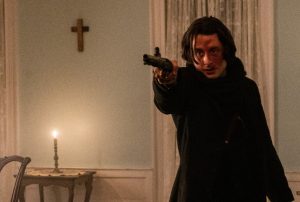 Compared to the period piece The Witch, and Fear Street: Part 3 1666, I see the sameness in the oddly moving score, slow pace, and feel of an ancient evil hiding just off-screen.

Slow burn is the key element to know about this atmospheric film, but the performances were believable, every scene an exercise in twisted creepiness, and what a brutal ending! As with all extreme religious stories, the wages of sin always seem to be death. If you are the kind of horror fan who can patiently wait for it all to come together, then you need to see The Last Thing Mary Saw!