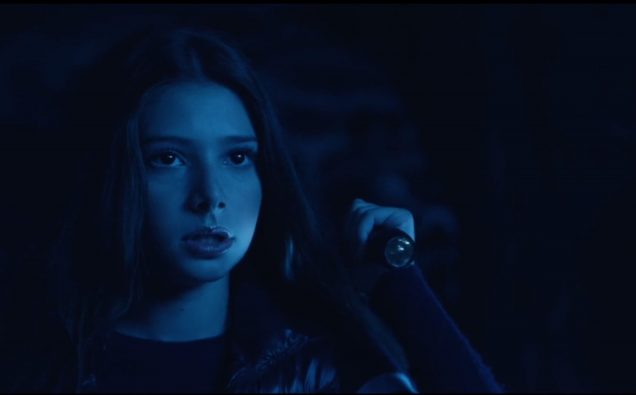 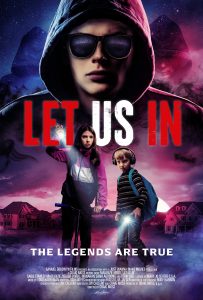 Even though I am a hardcore horror fan, I still appreciate a thriller that the whole family can watch. Director Craig Moss’s Let Us In, is the most recent film to join family-friendly classics like Gremlins, Ghostbusters, and Beetlejuice. The black-eyed children’s legend is brought to life in this fun, campy supernatural film.

If you look up black-eyed children (or black-eyed kids) you will find an American urban legend about paranormal creatures who resemble children between ages 6 and 16, with pale skin and black eyes, who are reportedly seen hitchhiking or panhandling, or found on the doorsteps of residential homes.

Synopsis: A spirited twelve-year-old girl and her best friend look to uncover the sudden disappearances of several missing teens in their small town. Realizing there might be something deeper happening, Emily and Christopher might be up against forces they cannot even imagine.

The film begins at a teen party. Teens camping or partying in the woods is the beginning of many horror films. But I guess this small town doesn’t know this horror trope’s rules.  While kissing, a couple find themselves face-to-face with a group of foul-smelling, very pale teens in black hoodies with a single request; “Will you let us in?” I’m pretty sure I would say no, but to try to get rid of the obnoxious peeking toms, the boy sarcastically says yes and then tries to fight them. Not a good plan. The teens attack him and then proceed to chase the girl, who then disappears after the encounter.

Back at school, we meet, Emily (Mackenzie Moss) who is being terribly bullied by the popular kids in town. We find out she lost her sister to a recent accident, and everyone thinks she is to blame. Luckily, she has a younger friend named Christopher, (O’Neill Monahan) who is nerdy and extremely smart with electronics. Together they are trying to win a science contest by making contact with aliens, so she has a safe place to hang out.

Our two young protagonists do a great job searching for ways to stop the weird Village of the Damned type kids with a little supernatural help and a past victim, the creepiest old guy in the neighborhood, known as Mean Mr. Munch. (Tobin Bell)

Mr. Munch was abducted 50 years before by these teens, but somehow got away, and has a lot of info on how to stop them. He is the only adult who believes them or even sees the evil hooded teens.

Since the Black-Eyed Kids do not take no for an answer, teens start disappearing right and left, and much like in Stranger Things, or The Goonies it becomes up to the children of the town to save them.

Highlights: I loved seeing Tobin Bell as Mr. Munch, but my favorite cameo was seeing Judy Geeson, who you might remember from one of her many roles in an almost 60-year acting career, as Emily’s grandma. She was wonderful. I was also charmed to see the shots of the town where they live, which were filmed in my hometown of Orange, California!

Let Us In is a terrific sci-fi thriller that is perfect for kids of all ages. It is compelling and entertaining, with enough scares to keep older viewers interested yet perfect for a family movie night.

All horror fans have a favorite “gateway” film that began their love affair with horror. Mine was Gremlins– I even named my cat Gizmo! Let Us In might be the one for your kids. This sci-fi thriller is an enjoyable watch, with jump scares, paranormal elements, kids fighting evil, and a mystery; all without sex or gore.