Looking Back At Carrie Fisher’s Cameo In Scream 3

"I was up for Princess Leia. I was this close too." 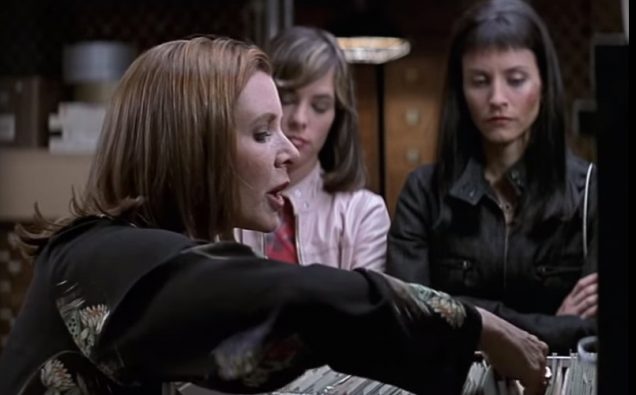 Unless you’ve been living under a rock, have been sleeping for the last 24 hours, or have no access to social media or the internet (which is impossible since you are reading this right now), you may have heard that Carrie Fisher, better known to the world as the actress behind Princess Leia in Star Wars, passed away yesterday at the age of 60.

Now I’m not here to write about Star Wars. After all, I am well aware that this is a horror website. I’m writing today to talk to about probably an overlooked role of hers, although in fairness, every non-Princess Leia role of hers is probably overlooked. Her role as Bianca Burnette in Wes Craven’s Scream 3 and the awesomeness of it.

Scream 3 is obviously the 3rd film in the Scream franchise, but at the time was “the final act” of the then ‘Scream Trilogy’. The entire Scream saga had always been tongue in cheek, having been originally conceived as a spoof of horror films and then morphed into the final product of the first Scream film that we all know and love. Scream 3 returned to more of a humorous, lampooning of Hollywood than the pervious installments. Scream 3 spoiler alert: Scream 3 is about a film inside the film. While shooting ‘Stab 3’, which is the second sequel to ‘Stab’ which is a movie inside the Scream universe about the events of the first Scream film, murders begin to happen to the cast and crew of ‘Stab 3’, thus turning the production of the completely fictitious film into a real life version of Scream. Follow all that? Scream 3’s ludicrous plot, horrible reveal of the killer, and flat jokes easily make this the worst edition of the Scream saga. The films one saving grace? It’s obligatory cameos. First and foremost, you had Lance Henriksen as a producer and Roger Corman as a studio executive. Kevin Smith and Jason Mewes appearing in character as Jay and Silent Bob. Hell they even figured out a way to get a Jamie Kennedy cameo as Randy Meeks, a beloved character that was killed in Scream 2. But one cameo stuck out more than the rest, that was the cameo of Carrie Fisher.

The scene entails 2 of the characters, Gail Weathers and Jennifer Jolie, talking to studio secretary Bianca Burnette about Sydney Prescott’s mother Maureen’s former acting career. Even before the actress behind Bianca is revealed you know it’s going to be good because the moment Jennifer sees her, she gets that surprised, “no way” look. After the reveal as to who Bianca is, Gail’s eyes also begin to pop out of her head.

“Like her? I’ve been hearing it all my life.”

So you now have an actress, a big name actress, taking a shot at herself in a film. She could have had a big head about it. How many actresses do you think would have turned doing that down? 95%? But there was Carrie Fisher, making fun of herself. There was Carrie Fisher, being the one bright light in this black hole of a movie called Scream 3. But she wasn’t done with just that line, she had a great follow up.

“I was up for Princess Leia. I was this close too. But you know who gets it? The one who sleeps with George Lucas.”

Now that was an epic burn (of herself). The way her character was so disgusted by Carrie Fisher. And then on top of all of that, finding out that most of this was her idea and helped to write her characters dialogue? Amazing. The only thing that could have put the scene over the top is if Bianca told Gail Weathers that she looked like Courteney Cox. Although Gail’s reaction to Bianca’s line “Do you want me to tell you who you look like?” probably means that she did say it and it didn’t come out so well, so it met the cutting room floor.  She wasn’t afraid to make fun of herself, a trate that unfortunately isn’t universal in Hollywood. While her scene lasted less than 3 minutes, the scene was pure gold, despite Parker Posey’s best attempt to ruin it. Carrie’s acting seemed too good compared to the other actors in the film. While watching the scene, you really get the feeling that she hates Carrie Fisher.

And the scene wasn’t even just a throw in for a good laugh either. It’s Bianca that sets Gail on the right path of figuring out what is going on and eventually leading her to who the killer is. Revealing to the audience the true back story of Maureen Prescott.