Lovecraft Story by Story: “Beyond the Wall of Sleep”

The author's third trip into the realm of dreams, and his first significant merging of fantasy with sci-fi 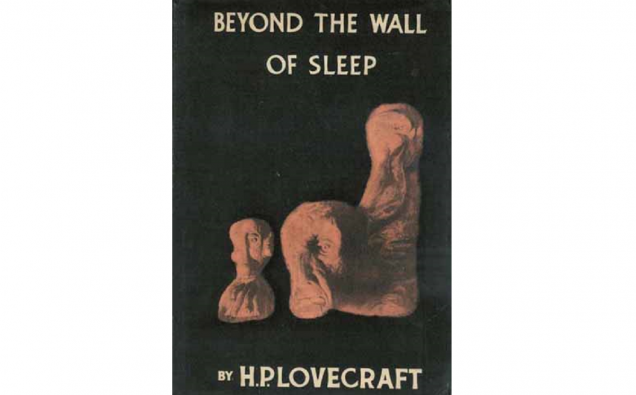 This is the third Lovecraft story (following “The Tomb” and “Polaris,” though it saw publication prior to either of those) to significantly interrogate the notion of dreams as a mode of communication or travel outside the confines of normal space and time.  However, while it bears similarities to these earlier works, it differs from them in a couple of key respects: while those stories were told from the perspectives of characters haunted by recurrent dreams, in “Beyond the Wall of Sleep” our narrator is primarily an observer of another man’s torment, only piercing the perceptual veil at the story’s end; and, for the first time in Lovecraft’s work, the fantastic elements of the story are examined in explicitly science fictional terms.

The narrator of this story is an intern at a mental hospital who develops a fixation on a newly-arrived patient, Joe Slater, whom the author describes as a “typical denizen of the Catskill Mountain region,” whose “isolation… has caused them to sink to a kind of barbaric degeneracy.”  Slater has a lifelong history of waking up disoriented from strange dreams, and recently, after one such tormented sleep, awoke in a fit and killed one of the men trying to restrain him.

The story heavily emphasizes Slater’s ignorance and stupidity, in order to emphasize that the strange things he speaks of after suffering these nocturnal visions cannot be drawn from any outside source, nor can they be the inventions of his own mind.  The narrator – who believes in the possibility of mental telepathy based on the assertion that “human thought consists basically of atomic or molecular motion, convertible into ether waves of radiant energy” – soon begins experimenting on Slater using a device he developed while in school for the purpose of mechanically transmitting thoughts.

Eventually, on a night when the narrator realized Slater is on the verge of death, the experiment proves successful.  The narrator is able to slip free of his physical form and travel across an ethereal plain, alongside another entity which he refers to as his “brother of light.”  When he awakens, this non-corporeal entity continues to communicate with him through the rapidly expiring Slater, explaining that it has been trapped in Slater’s body for the man’s entire life, but is now going to be released to return to traveling freely outside the material realm.

While “Beyond the Wall of Sleep” lacks the poetic charm of “The Tomb,” it is certainly a great improvement over the vague and clumsy “Polaris,” and the sci-fi approach to a fantasy subject will recur throughout the rest of Lovecraft’s writing to sometimes incredible effect.  He is at this stage steadily and effectively fleshing out the basic diegetic principles of his oeuvre.

Unfortunately, as with “Polaris,” the author’s xenophobic tendencies rear their ugly head and mar the work for the modern reader.  In this case, it is the descriptions of Slater and his kin that demonstrate the prejudices of the sheltered, privileged writer.  In order to convince us that Slater’s visions must be external in origin, we are treated to a barrage of slurs against these “strange, repellent” people for whom “law and morals are non-existent,” and who speak in a “debased patois.”  In this case, a half-hearted defense might be mounted on the grounds that the prejudice is at least cultural rather than racial, but Lovecraft specifically speaks of a “peasant stock” from which this “unimaginative populace” is descended, indicating a belief that these qualities are a result not just of isolation, but of breeding.

Other than this (glaringly) problematic aspect, the story is well conceived, and it is one of the best structured of Lovecraft’s narratives up to this point.  And, of course, the author’s gift for colorful and erudite descriptions is in play as always.  For instance, when the narrator first finds himself crossing over to the ethereal plain, he tells us that: 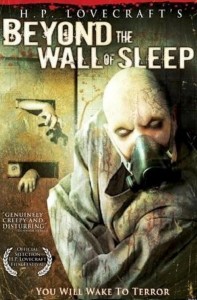 Walls, columns, and architraves of living fire blazed effulgently around the spot where I seemed to float in air; extending upward to an infinitely high vaulted dome of indescribable splendour.  Blending with this display of palatial magnificence, or rather, supplanting it at times in kaleidoscopic rotation, were glimpses of wide plains and graceful valleys, high mountains and inviting grottoes; covered with every lovely attribute of scenery which my delighted eye could conceive of, yet formed wholly of some glowing, ethereal, plastic entity, which in consistency partook as much of spirit as of matter.

In 2006, “Beyond the Wall of Sleep” was adapted into a feature film by directors Barrett J. Leigh and Thom Maurer.  I haven’t seen it, but reviews and ratings are not favorable.

The Blood Shed offers not just reviews, but also news, analysis, original fiction and more!  So why not explore the site a little?  Then, stop by our Facebook page!