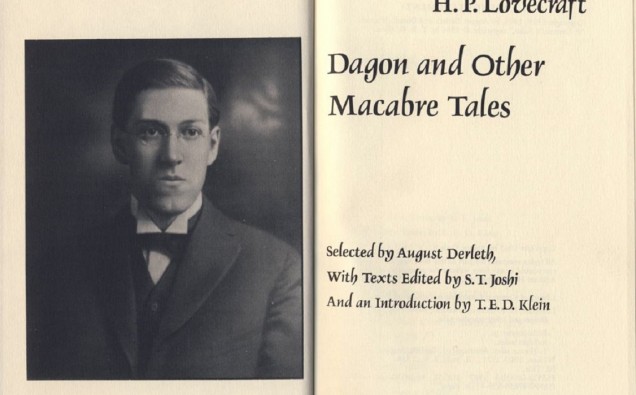 This is the first story I’ve gotten to that I was already familiar with prior to starting this review series.  I’ve read “Dagon” a couple of times previously, without the chronological context I’m getting now, and I can’t say it ever left much of an impression on me.  It is, in many ways, a prototype for what a lot of readers would consider the definitive Lovecraft story, “The Call of Cthulhu” (1928), and I always just processed it as a kind of half-baked version of something Lovecraft had explored more thoroughly on other occasions.  But comparing it to stories that did not yet exist is hardly a reasonable way to evaluate it; this story saw Lovecraft laying the foundation on which many of his best and most famous stories would be built, and doing so with typical stylistic panache. 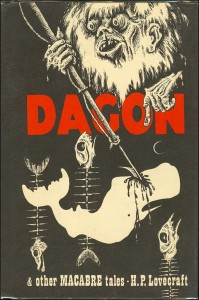 As in “The Tomb,” Lovecraft starts “Dagon” by identifying his main character as an unreliable narrator; in this case, he is a morphine addict, “writing… under appreciable mental strain,” preparing to commit suicide to escape the horrors he’s witnessed.  He then tells the tale of how he reached this sad state.

In the story he relates, the narrator is a sailor whose ship has been captured by German forces in the early days of World War I.  He’s managed to escape, but has become lost at sea.  One morning, he awakens to find his surroundings completely transformed; he is on an island, covered in black, sticky goo, surrounded by dead fish.  The best guess he can manage is that volcanic activity has thrust a portion of the ocean floor to the surface, stranding him in its midst.

After days of wandering in hope of finding a way back onto the water, he begins to suffer strange and terrifying nightmares.  Eventually, he happens upon a massive piece of stonework, covered in unfamiliar writing; depictions of deep sea creatures, some of them unknown in the modern world; and figures of hideous fish-men who are depicted as much larger than modern human beings – which he takes to be the imagined gods of an ancient civilization.

Then a great monstrosity appears and approaches the monolith.  We are given little description of the creature, beyond its vast size and that it is covered in scales.  It is the site of this thing that finally breaks the mind of the poor narrator.  An obsession with, and dread of, this creature is what has driven the poor man to addiction and to the verge of suicide.

Subsequent Cthulhu Mythos tales (as “Dagon” can be regarded retrospectively) will examine the modern cults surrounding the Elder Gods, and show the effects these antediluvian horrors still work upon our world.  But, as the first of its kind, “Dagon” draws the whole of its horror simply from the realization that this terrible thing exists.  There is little real plot, and nothing in the way of character development.  But, as the first entry in what would become the much larger universe of the mythos, it is a significant achievement.

As ever, Lovecraft excels at establishing an atmosphere of uncanny dread.  The narrator’s fears are stirred as soon as he awakens on this strange land mass; my favorite passage is this:

Perhaps I should not hope to convey in mere words the unutterable hideousness that can dwell in absolute silence and barren immensity.  There was nothing within hearing, and nothing in sight save a vast reach of black slime; yet the very completeness of the stillness and the homogeneity of the landscape oppressed me with a nauseating fear.

Lovecraft is perhaps hedging his bet by telling us that words will not be up to the task of conveying the effect of the scene upon his narrator, but his gambit pays off; he describes the scenery and the sensation beautifully, but his preface gives the reader license to imagine something even grander and more horrifying.

Throughout, it is the sparseness of detail that makes “Dagon” so effective.  Lovecraft uses vocabulary which speaks to the sensations the sights awaken in the narrator, but tells us only enough about those sights to create a template on which one can impose the shapes of one’s own nightmares. 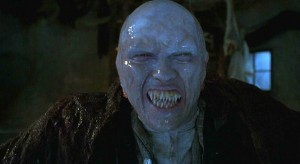 A worshiper of Dagon, from the film adaptation

There was a film called Dagon released in 2001; it was the work of director Stuart Gordon, producer Brian Yuzna, and screenwriter Dennis Paoli, all of whom were associated with the beloved Lovecraft adaptations Re-Animator (1985) and From Beyond (1986).  However, it is at least as much an adaptation of Lovecraft’s later novella The Shadow over Innsmouth (1936) as it is of “Dagon,” and it is disappointing film compared to the same team’s earlier work.

In addition to the weekly Lovecraft reviews, The Blood Shed covers movies, news, history, video games, music… pretty much anything and everything horror!  So keep on reading, and check out our Facebook page!