Lovecraft Story by Story: “The Statement of Randolph Carter” 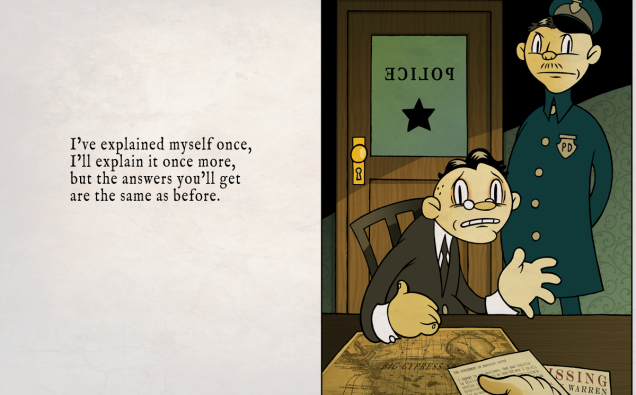 A few times so far in this series, I’ve pointed out a thematic or structural element cropping up that would recur and pay off later in Lovecraft’s oeuvre.  With “The Statement of Randolph Carter,” we reach a point at which a number of elements coalesce to create the clearest prototype for what most people would think of as the “standard Lovecraft template.”  It’s not that all – or even the majority – of the works that follow adhere to this template (such a claim would do a gross injustice to the scope of the author’s writing); this is just one facet of a varied canon, and honestly not one that was revisited all that much, but it is the style of Lovecraftian fiction that is most accessible and familiar to a larger audience.

The basic format is this: two characters, one more experienced and knowledgeable than the other, share an interest in some esoteric antiquarian, mystical, or occasionally scientific area of study.  One of them is the narrator, relating events after the fact.  In the flashback which makes up the body of the narrative, the more experienced character draws his fellow into a particularly strange or perilous investigation, and then they encounter some horror which defies precise description, events occur which the narrator cannot precisely remember, and the climax is some chilling final line which proves the true nature of whatever was being investigated, without giving away any specific details about it.

Here, our narrator is Randolph Carter, whose fragile but inquisitive character suggests a stand-in for Lovecraft himself, and who will reappear in several future Lovecraft stories.  His more experienced colleague, whose disappearance is the subject of Carter’s story, the more dominant and intimidating Harley Warren.  Together, the two of them have made an extensive study of a number of “strange, rare books on forbidden subjects,” written in a variety of languages (the majority in Arabic, which ties this story into later Lovecraft featuring the Necronomicon, the fictional [seriously, fictional, anything you buy that claims to be the “real” thing is bullshit, I assure you, so stop claiming you’ve read “the actual Necronomicon,” please] tome which Lovecraft attributes to the “Mad Arab” Abdul Alhazred), and decide to do a little field work investigating “why certain corpses never decay, but rest firm and fat in their tombs for a thousand years” (the italics are Lovecraft’s, not my own).  Warren descends into a deep tomb, while Carter remains behind, communicating with his friend via “a portable telephone outfit.”

The majority of the story is spent getting the characters into this situation.  Then comes perhaps the most chilling sequence thus far in Lovecraft’s work, as Carter recounts the conversation he and Warren had via the telephone while the latter was under the ground – the last conversation anyone ever had with Harley Warren.  Warren cannot bear to express to Carter exactly what he witnesses there, in the “sepulchral depths,” and soon turns to imploring his friend to seal him in and flee for his own life.  Finally, as some “hellish things” move in on Warren, he goes silent.  Carter remains for a while, calling into the phone unanswered, and then… well, then comes the climactic revelation, which I’m not going to spoil.

“The Statement of Randolph Carter” is not necessarily the best story Lovecraft had written to date, but it is certainly the most effectively chilling.  The typical indescribable horrors are well coupled with the tense situation of the last couple of pages, and the reliance on dialogue over description in these passages gives it all an immediacy not often found in Lovecraft’s work.  A particularly nice touch is the shift from Lovecraft’s usually erudite phrasing to the more colloquial “beat it” Warren falls back on as he begs Carter to depart.

I’m not sure I have a single favorite quote from this story, but perhaps the most archly Lovecraftian is this:

In the lone silence of that hoary and deserted city of the dead, my mind conceived the most ghastly phantasies and illusions; and the grotesque shrines and monoliths seemed to assume a hideous personality – a half-sentience. 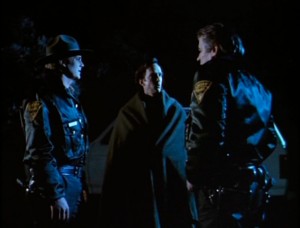 Randolph Carter prepares to give his statement in The Unnamable II

The next story to feature Carter was “The Unnamable” (1925), which was adapted into a film of the same name in 1988 by writer/director Jean-Paul Ouellette.  Ouellete decided to bring in elements of the earlier story for his 1992 sequel, The Unnamable II: The Statement of Randolph Carter.  Mark Kinsey Stephenson returns to the role of Carter, and once again helps elevate the ham-fisted material with a charming and slightly tongue-in-cheek performance; while John Rhys-Davies brings his always imposing and charismatic presence to the role of Warren.  However, both stories put together simply don’t constitute enough material to occupy even one feature film.  The first movie had to stretch its story far too thin (I’ll address it in more detail when I come to the entry for that story), and “The Statement of Randolph Carter” provides even less material to justify a feature runtime.  Most of the content of the story is basically thrown out, and Ouelette instead creates a contrived, pointless extrapolation and expansion of events he’d already over-explained in The Unnamable. 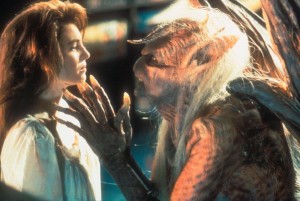 This scene, from the same movie, has very little to do with anything Lovecraft ever wrote

Among other adaptations, Australian artist R.J. Ivanovik has produced a charming “for beginning readers” version. 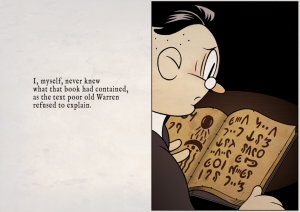 A page from Ivanokvik’s adaptation

“The Statement of Randolph Carter” is a story in which many of the key themes and techniques Lovecraft had been developing as a writer really begin to come together to create the specific breed of weird fiction for which he is remembered and rightly praised as one of the all-time masters of his chosen genre.

The Blood Shed is the home of a lot more reviews, as well as news, short stories, essays, and basically all things horror.  Also, when you have a minute, hop on over to our Facebook page!