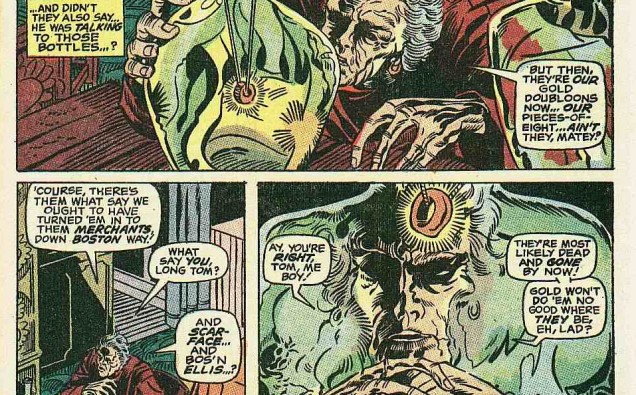 Lovecraft manages to fit a lot into fairly few words in this one. You can check out an audio version read by Doug Bradley

“The Terrible Old Man” is the story of three career criminals looking to rob the eponymous character, an eccentric retired mariner so ancient that no one alive remembers his youth. He is known for frequently conversing with a collection of bottles he keeps in his home, each of which contains “a small piece of lead suspended pendulum-wise from a string,” and which he addresses by names like those of old-world pirates; Lovecraft further relates that, “whenever he speaks to a bottle the little lead pendulum within makes certain definite vibrations as if in answer.”

I don’t think it’s too much of a spoiler to reveal that these little bottles implicitly pay off in the fate met by the would-be robbers, although Lovecraft is pleasingly vague about the precise details of the encounter. Where the weird or supernatural aspects of Lovecraft’s stories are usually detailed accounts of that which cannot be fully explicated, here he gives us a more traditional ghost story, but trusts in his audience to be able to render the necessary details. It’s a nice, and effective, variation on the “standard” Lovecraft story.

This is also the first story set in the fictional New England geography that Lovecraft will detail over the course of future writing. Here, he introduces the shipbuilding town of Kingsport, which will come up in half a dozen of the author’s subsequent stories. The Terrible Old Man himself will return in one of those stories, “The Strange High House in the Mist” (1931); another of them, “The Silver Key” (1929), is one of the return appearances of Randolph Carter, first introduced in “The Statement of Randolph Carter,” the story which immediately preceded “The Terrible Old Man.”

So, what we see in these stories is Lovecraft beginning to construct the alternate world which will be the home to his most famous works, at least as much a unifying element of the author’s oeuvre as those details subsequent writers and critics have defined as the “Cthulhu Mythos.” As such, “The Terrible Old Man” is not only an effective piece of eerie storytelling, it is also an important stepping stone in the development of a bigger Lovecraftian world. 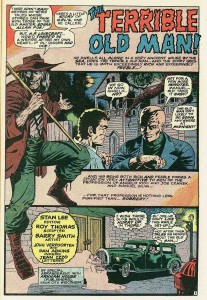 Unfortunately, this is another story in which the xenophobic (if not outright racist) aspects of Lovecraft’s writing cannot be ignored. The names of the disreputable characters whose crimes are punished by The Terrible Old Man, Ricci, Czanek, and Silva, are a direct reflection of the increasing population of Italian, Polish, and Portuguese immigrants in New England, and the story offers this two-thirds of this trio no character traits beyond criminality and the potential for great cruelty.

The story was adapted as an effectively unnerving comic for Tower of Shadows issue 3 in October, 1969.

Make The Blood Shed your first stop for reviews, as well as news, short stories, essays, and basically all things horror.  And be sure to check out our Facebook page!