Important, but not that engaging 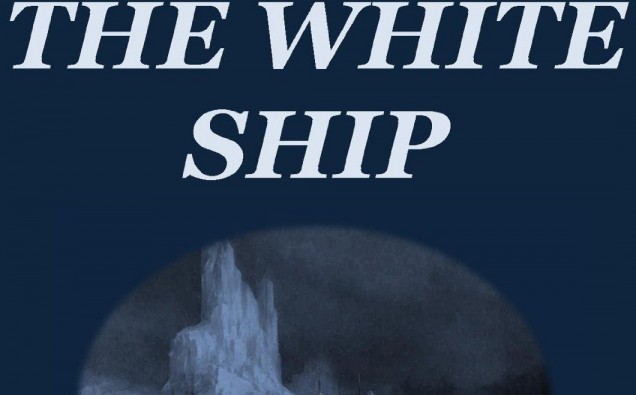 I admit that I’m stretching a bit by even including this story in my review series; although the subject matter is decidedly outré, its high fantasy only includes the barest hints of horror elements.  However, Lovecraft’s take on fantasy is of such importance to the nature of his most famous horror stories that I would just feel remiss leaving this work out.  And I suppose there is an element of existential horror in the main character’s ultimate realization that his impulse to explore and experience has cost him access to paradise.

The story is narrated by Basil Elton, a third generation lighthouse keeper with a nostalgic yearning for a bygone era of high seas adventuring.  On nights with a full moon, Basil regularly sees a mysterious White Ship gliding smoothly and silently at sea.  Eventually, he begins to see a man on the deck of the ship beckoning to him, and one night Basil walks “on a bridge of moonbeams” and boards the ship.

The ship passes into the Land of Zar, a domain of forgotten dreams and fantasies, and pass Thalarion, home of “all those mysteries that man has striven in vain to fathom.”  Elton wishes to visit Thalarion, but his guide refuses this request, because no one has ever returned from visiting that realm.  In the most traditionally Lovecraftian moment of the story, the guide warns:

Therein walk only daemons and mad things that are no longer men, and the streets are white with the unburied bones of those who have looked upon the eiodon Lathi, that reigns over the city.

This tantalizing hint could have formed the basis for a story of its own, but, of course, Lovecraft wrote his share of stories about realms of unfathomable knowledge that drive men to madness.  Thalarion here serves as a nice textural detail to the broader world Lovecraft is building.  But it is handled in a bit too cursory a fashion, more of a footnote than a story beat.

Elton is taken to the Land of Sona-Nyl, an ageless, deathless realm beyond time and space.  The description of Sona-Nyl suggests something Escher-esque, with each of its paradisiac realms giving way to another, grander and more beautiful heaven in infinite, exponential growth.

But, even ever-expanding and heightened chambers of paradise are ultimately too monotonous for the exploratory impulses of human beings, and so, after many aeons (whatever a measure of time can mean when one is outside of time) in Sona-Nyl, Elton asks to be taken further, to Cathuria, a Land of Hope which no human has ever visited.  He is warned he is departing a land without pain or death in hope of finding a place of unknown character, and that he might be trading paradise for no reason, as it lies in perilous waters.  But Elton has painted in his own mind a picture of Cathuria which enchants him too strongly to be resisted, and so the White Ship sets sail again.

In the end, the White Ship is unable to navigate the waters around Cathuria, and Elton finds himself spontaneously returned to his lighthouse, as if no time has passed, and he can no board the White Ship or return to Sona-Nyl.  He has given up heaven in the quest for something more, and is left only with the mundane.

Lovecraft’s allegory here is awfully heavy-handed, without nearly enough character development or incidental detail for it to function as an engaging narrative.  His best works of fantasy are more about the reactions of his characters than about the details of what they have witnessed.  Here, the author’s purpose is to offer some conception of paradise, and of what people might imagine a realm beyond paradise to be like.  These notions are so abstract, that any specific descriptions are going to ring false and a little silly.  But, having assigned no real depth to Elton or his guide, Lovecraft instead must try to dwell on the details of Sona-Nyl and – especially – Elton’s imagined Cathuria.  Perhaps, had the nature of Elton’s Cathuria been directly tied to something we know about Elton’s character, there might have been some dramatic impact to his yearning.  But all we are given are superficial details, with no indication of why Elton is drawn to such a place beyond, “Everything’s big and pretty.”

His attraction to grand and abstract conceptions of reality is essential to the success of Lovecraft’s best work, but in The White Ship he is far too self-indulgent, more intent on expounding about his fantastical realms than on crafting a compelling narrative. 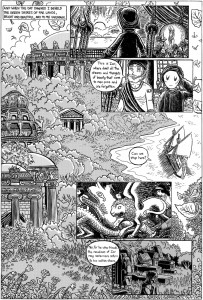 A comic adaptation by Jason Thompson has been posted on his site, Mockman.com.  In this instance, I think trading in Lovecraft’s florid descriptions for simple but evocative black and white depictions actually works a little better; the drawings manage to be somehow less specific than Lovecraft’s words, and the audience’s mind is given more freedom to expand and explore on their own, to imagine what lies just beyond the frame of each panel.

Come back to The Blood Shed for more reviews, as well as news, stories, essays, and basically all things horror.  And in the meanwhile, hop on over to our Facebook page!