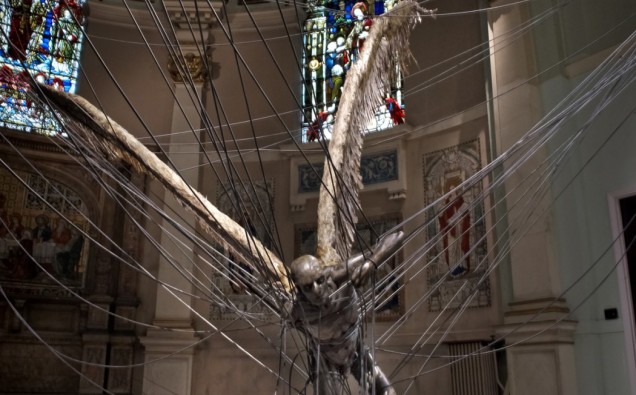 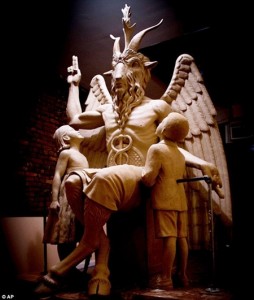 Last July, religious conservatives got all grumpy when a humongous “satanic monument” was unveiled in Downtown Detroit.

Nash Jenkins, correspondent for Time, describes the it as: “A colossal bronze statue of Baphomet, the goat-headed wraith who, after centuries of various appropriations, is now the totem of contemporary Satanism. The statue itself is impressive: almost nine feet tall, and weighing in at around a ton. The horned idol sits on a throne adorned with a pentagram… He has the jarring horns of a virile ram, his legs end in hooves. Two bronze-statue children stand on either side of him — a girl on his left; a boy on his right; both are looking up at him earnestly.”

The event clearly didn’t usher in the Apocalypse, as many zealots had predicted and the story has since disappeared into the ether (becoming the non-story it was to begin with).  Still, there’s no denying that satanic imagery has the power to vex and terrify—even though actual satanic cults have been proven all but nonexistent.  Truth is, the personification of evil most commonly referred to as “the Devil” makes for an excellent artistic study; geniuses like Michelangelo and Milton certainly thought so. 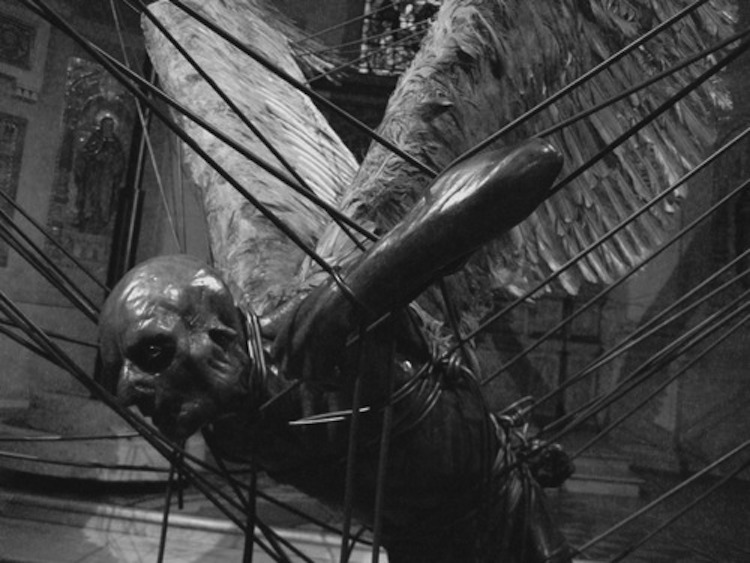 But almost a year before Baphomet drew ire in Detroit (and an ocean away), another Satan-themed statue was erected with little fanfare is an unlikely, almost shocking location.  Lucifer (Morningstar), an impressive statue of wax and real feathers by artist Paul Fryer, was unveiled in August of 2014 in the Holy Trinity Church in Marylebone, Westminster.

The “fallen angel” is tangled in electrical wires, suspended in front of the altar—an impressive wingspan nearly fills the cathedral.  The placement lends itself to natural illumination: Sunlight filtered through Holy Trinity’s legendary stained glass.  Truth is: This sanctuary hasn’t been an active place of worship since the 1930’s, which goes a long way in explaining how such a seemingly impropriate and sacrilegious image ended up on sacred grounds.  Still it’s an intentional juxtaposition that added volumes of subtext to an already complex subject.

Fryer is no stranger to controversial reimaginings of religious iconography (you can see his entire portfolio: HERE), but there’s no denying that location is an integral component of Lucifer’s impact.  The artist refuses to discuss the exact implications of his creation—perhaps because its themes and politics are practically blatant! 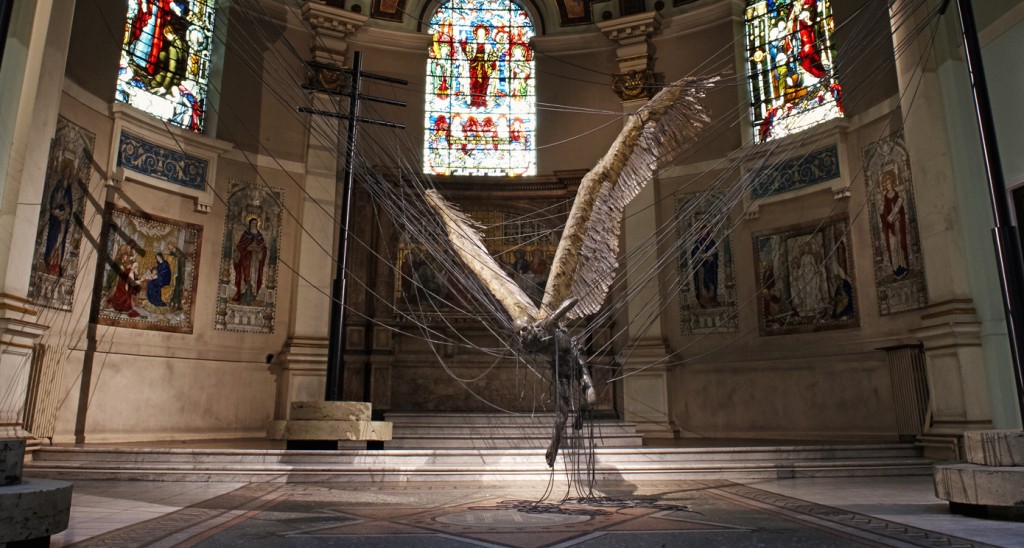 It could be an indictment of organized religion, where Lucifer is merely a puppet or marionette—a tool of the Church.  It could be a statement regarding the pitfalls of our modern electronic society and the anonymizing effects of internet communications.  It could be a sympathetic representation of the Devil, the fiend’s humble return to the realm of lightness.  Who needs and artist’s explanation when a piece is so instantly evocative?

The bizarre artistry and unlikely location of Lucifer (Morningstar) should make it a likely destination for fans of all things creepy and macabre.  I’m definitely adding a trip to Westminster to my bucket list!

What do you think of Paul Fryer’s Lucifer (Morningstar)?  Do you agree that the location is integral to its message?  Sound off in the Comments section! 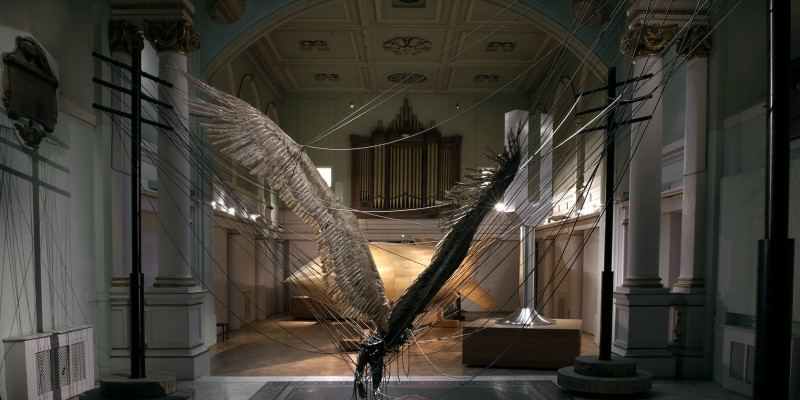