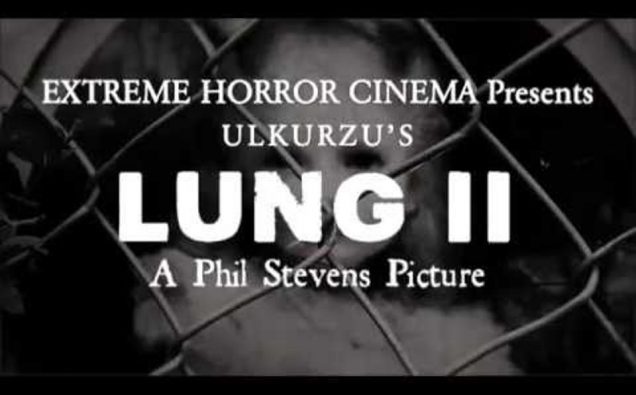 In 2014, I had the pleasure of being the first journalist to pre-screen Phil Stevens’ film Flowers. It was a beautiful film, a true work of art. It is what got me obsessed with the underground arthouse genre of horror. Recently, I check out his latest work: Lung II. This time, Phil picks up the starring role as well as writer/director.

Similar in style to Flowers, this is an arthouse film with a focus on telling a story with action and, as such, there are actually no spoken lines throughout the film. Lung II follows an unnamed man as he wanders a city which seems to be for the most part uninhabited. As he wanders, he comes across strange, horrific things, ill-formed entities, and death. Are the things he witnesses real or just in his head? And what do they mean?

The film is simply a work of grotesque beauty. Now, I do prefer Flowers over Ling II by a small margin, but I feel that is mostly due to personal preference in that I enjoy the more contained environment of the former as the entirety of it takes places within one house whereas the latter features many outdoor scenes and set changes.

The key to success for both films is the attention to detail and usage of truly top notch practical fx. I know that Phil used real animal carcasses and organs for authenticity for several scenes of Flowers and I suspect that to be the case here as well. But, whereas much of Flower’s gore was more mundanely human or animal, Lung II features some truly bizarre entities created with spectacular detail and realism. I suspect from their type of movement they are well crafted puppets.

Overall, this is a phenomenal addition to the arthouse genre and a must see for fans. Phil Stevens is definitely one to keep an eye out for in the future. I personally can’t wait to see what macabre piece of art he puts to film next!