Santa is a naughty boy this year! 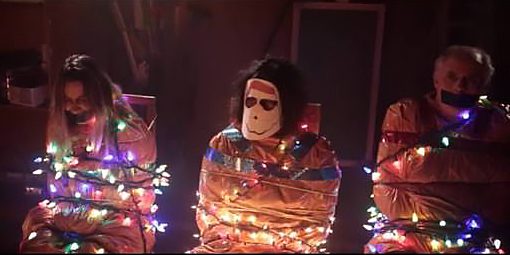 The Christmas season is in full swing and the malls are a frenzied and unhinged place to be! I know this firsthand, because to procure some extra cash for holiday gifts, I work as a photographer in a Santa booth. Wait! Before you go all “WTF” on me- I do like Krampus better! Really! But unfortunately, he doesn’t pay very well. 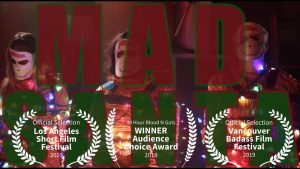 So why did I admit my guilty secret to you? Because I have a totally bat-shit crazy horror short from director/actor Bruce Blain to share with you, called “Mad Santa”! All you demented horror fans will love it! It sure tickled my Christmas horror spirit!

At just over 6 minutes long, this entertaining Santa torture film gets to the point quickly. Bruce Blain stars as a disgruntled guy who didn’t get his coveted job at the mall as Santa. To say this guy overreacts is an understatement, as he takes out his anger on the mall manager who rejected him. Blain gives us an amazingly psychotic performance that made me both cringe and laugh out loud. Well done!

The film was created for the Vancouver 48 Hour Run N Gun Film Competition- which if you don’t get it, means that this was written, filmed, edited and scored in 48 hours! This kind of festival can bring out the best or the worst in a filmmaker, and in this case, it worked perfectly. 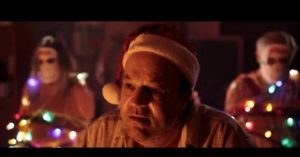 This is not a Santa film to share with your kids FYI, but it’s not terribly gory either. I think it’s just right. Demented, bloody, festive and darkly funny. A special fruitcake made just for you horror fans! I don’t want to spoil it, so I have the entire film below for you to watch- Your Christmas present from Santa Bruce and of course me, your zombie girl here at The Blood-Shed.

My only advice to this particular Santa wanna-be is that if he really wants to work at the mall being the chubby and jolly St. Nick, he needs to grow a real beard! Fake beards are out, real beard Santa’s are in! Maybe next year?

Well, my ghoulish fiends, enjoy a Creepy Christmas and make sure to share “Mad Santa” with your friends!