You can help it happen! 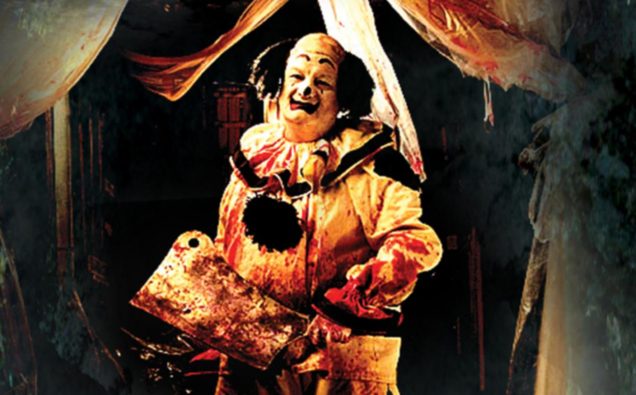 100 Tears is a gory, brutal slasher flick by Marcus Koch and Joe Davison which has built a solid cult fanbase. Now, coming up on its 10 year anniversary, the team is back together trying to put together a sequel! I caught up to Marcus and was able to ask him a few questions about the upcoming gorefest.

John Lepper: Mr. Koch, thank you for taking the time for this interview. For those unfamiliar, can you tell the readers a bit about who you are and what you do?

Marcus Koch: I’m a horror filmmaker and special effects artist, I handle practical effects, specializing in life casting and blood, guts and gore. The films I’m known for are 100 Tears a killer clown film, Rot, and most recently Bloodshock. Other films I’ve done fx work for are, We Are Still Here, Sweatshop, Ladies of the House, and American Guinea Pig : Bouquet of guts and gore.

JL: Very cool. Way too much cgi out there. Now, you are in the process of putting together a film called 200 Tears which is the sequel to your earlier film 100 Tears. Can you tell some of the readers a little about the original film, catch them up in case they haven’t seen it?

MK: I grew up on Horror films, and when I had the chance to do a slasher film, I wanted it to be fun and over the top, so I chose a killer clown, as I’ve always loved killer clown movies, just something about them that is scarier than a man in a mask. So out of that 100 Tears was Born…

My partner at the time on 2007 was Joe Davision, we had worked on a few short films and a few features, him as either an actor or producer, and me as the fx guy, we teamed up, both trying to get a film of our own off the ground, and in a turn of the right time right place of events, we were contacted by Elmar Berger, who became our main executive producer, he had seen my fx work and said he would like to back a project, as long as it was crazy Gory.

Joe Davison found our other Executive producer, Leslie Crytzer, and off we were, the light was green. We bounced ideas and and started to lay the rules for our killer clown, we didn’t want a title with “clown or “night of” or “killer this or that” something stand alone.

The rules for Gurdy were simple, he may be a clown, but I didn’t want an “evil” looking clown or to act silly or clowny. No death by pie in the face or balloon animals. He’s a deranged man who happened to work in the circus, and just happened to go off the deep end.

JL: That’s a really good template for a killer you built there. And I would say it definitely paid off! 100 Tears has a solid fanbase and is considered a cult classic by many and now we are getting a sequel. How did that come about?

MK: Joe and I have both been getting emails for years asking if we’d ever see a return of Gurdy, both of our careers have gone two seperate ways, and we have talked about collaborating again, many different script ideas, I had several ideas of where I thought it should go, and he had his, but nothing solid or that just stuck, we realized 10 years are about to pass, and figured maybe it’s time, he had an idea and wanted to just write it, also he wanted to direct the sequel, which for me, that was great, I wouldn’t have to double up on both jobs, directing and FX, I could just focus on all the gore, while I love directing, it’s just too taxing to try and tackle both, and no better person than Joe since he knows all the characters inside and out.

Granted in the first film I pretty much killed everyone off, but with Joe being the writer, I think he creatively, pulled it all together with his new script in a way to bring back a few faces that works.

JL: That’s fantastic! I understand you are using crowdfunding to get the movie going. How is it going? Are there any perks you want to talk about?

MK: I’ve always been on the fence about crowd funding, in one hand it’s a glorious way for filmmakers who might otherwise get their films made, on the other hand , I think it’s a double edge sword as in the last few years some people have abused this new format, by taking money and not making a film, thus leading people to be weary of just throwing anyone money, I’m hoping we can raise the funds to make the film we want to make. I’m hoping I have a good enough track record with my work that 200 Tears is a splatter film people want to see. So we’ll so how things pan out, worse case we don’t raise our goal we don’t make the film and we are back to square 1. But the perks too look out for are the screen used body parts, as those are always cool. And there will be plenty of them.

JL: Very awesome! Is there anything you can tell the readers about the plot for 200 Tears?

MK: That we’ll keep under wraps, but I will say the body count has definitely gone up, and we are trying to really outdo ourselves as far as the gore goes.

JL: Sounds great! Well, I’m definitely hoping the film gets funded. I want to thank you again for taking the time for the interview. Before I let you go, is there anything else you want to tell the readers?

MK: Also there may be a few other clowns we all loathe and fear who make cameos…

JL: Awesome! Can’t wait to see who shows up! Thank you again for the interview and best of luck the the Kickstarter!

Check out the Kickstarter and help make this awesome film happen while grabbing some brutally awesome perks!