Masters of Horror: Dance of the Dead Review

A Waltz Worth Taking 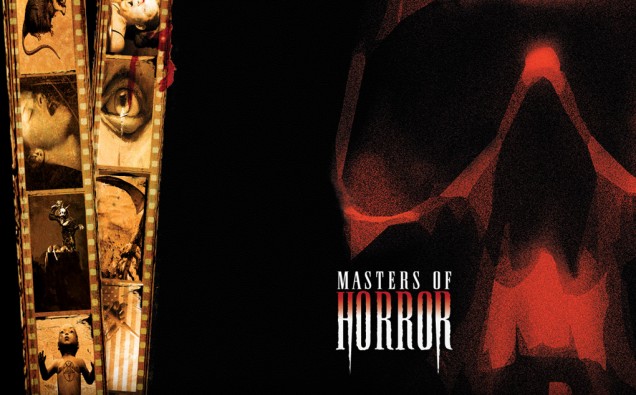 Now this is more like it! While the first two episodes of Masters of Horror weren’t bad, they were pretty standard stories. Incident on and off a Mountain Road was a slasher film with a decent twist, and Dreams in the Witch-house was a well done, but very straight forward possession flick. But in words of the magnificent Monty Python, “Now for Something Completely Different”. And Dance of the Dead is wonderfully, gloriously different. 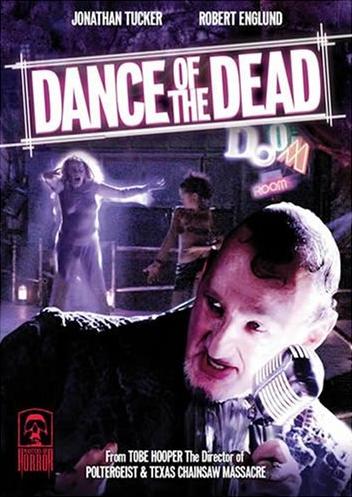 Horror master Tobe Hooper’s addition to the series is something precious few horror films ever are; truly original. Dance manages the impressive juggling act of weaving original, complex characters, creating an interesting, truly horrible world, and providing a ghastly new look at zombies, all in the course of an hour-long TV episode. Not bad Mr. Hooper. Not bad at all.

If you want a hint if how crazy were going to be getting here, you need not look farther than the first 5 minutes which feature cute little girl Peggy at her 7th birthday part, where she gets a front row seat to a terrorist attack. This isn’t just any WMD though; this is Blizz, a chemical that travels through weather patterns, burning alive anything unfortunate enough to be in the way. While Peggy, her momma, and her sister Anna survive by taking refuge in their house (and locking everyone else out) her prepubescent friends aren’t so lucky.

Cut to a number of years later, and the United States is in shambles. Millions have died in Blizz attack, World War 3 rages on, and punks out of a Mad Max film roam the streets, harassing old people and harvesting blood. Peggy and her Old Woman are still kickin’ it, although Anna is M.I.A. and the mom’n’pop diner they run is hardly paying the bills. Worlds collide though, when a particularly handsome hoodlum (he only has a few nasty facial scars) whisks Peggy away to a life on the streets. First stop: The Doom Room, a controversial club home to some of the most nasty, insidious things imaginable. And the dumps main attraction; The Dance of the Dead, a grotesque strip show even the most adventurous of perverts would find in bad taste. 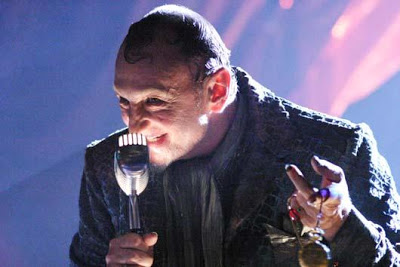 I feel like this review already contains a lot of exposition, but honestly, it’s kind of refreshing just to have something new to talk about. In a genre that so often features derivative plotlines and endless remakes, it’s a rare joy for a horror critic to see something, anything that’s a true breath of fresh air.

While there are many noteworthy things about Dance, it’s the films unique take on the undead that steals the show. Called Loopers, these strange creatures originate from a zombie drug used by America in World War 3 to make dead soldiers stand up and keep fighting. Stateside, the walking corpses have a stranger use; club strippers. 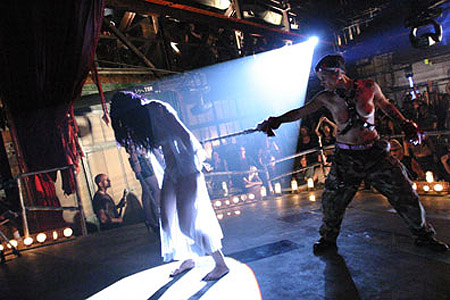 Overdosed corpses are given new life via the zombie drug, loopers are pushed on stage and tortured with cattle prods as they flail around in a macabre waltz of impulses and despair. What makes these dead dancers different than your traditional brain munchers is that their pretty much harmless. They don’t eat flesh, murder, or really do much of anything. Their just pitiful, half rotten shells of the people they once were, driven by pain, tortured for entertainment, and literally tossed in the trash when finished with.

So if the undead aren’t the villains, who is? Well there are a couple of candidates; the repulsive Doom Room club owner, played by a bug-eyed Robert Englund, is certainly a disgusting and unethical individual, but he’s just trying to run a business, albeit a controversial and nasty one. The roving gangs of thuggish teenagers cause plenty of ruckus, but while they take part in many minor crimes (and ok, one or two major ones) their actions aren’t really anything you can call evil. Their just stupid kids doing what kids do; trying to have a good time.

Even minor characters, like Peggy’s mom, are shown to be living in a shade of grade. I mean hell, the woman let a bunch of little girls burn to death on her lawn. But if she hadn’t, her daughters would have died too. And really, that’s the beauty in Dance of the Dead. There are no straight forward bad guys, nor are there any hero’s. These are just characters all trying to survive in a fucked world, one where morality not only no longer matters, but is liable to get you killed.

A lot of fully budgeted feature films have trouble pulling off stories like this, but Tobe Hooper makes it look effortless, delivering his best work since 1982’s Poltergeist, and cementing his status as a Master of Horror. This is an episode that made me remember why I loved horror to begin with, and one of the best pieces of genre television ever produced. So yeah guys, Dance of the Dead is pretty fucking good.

Well that’s it for this week kiddies. Join us next week for the 4th episode of Masters of Horror, one of the grossest pseudo-porno’s ever made: Dario Argentino’s Jenifer. It made me vomit in my mouth a little! And while that’s not normally a compliment, I’ve got a feeling it’s just what some of you nasty freaks are looking for… and hell, I am too. Until then, keep those blades sharp, and keep checking back to The Blood Shed for all the quality horror articles you know and love.

Jeff is a writer for The Blood Shed, ad eats, drinks, and bleeds horror. You can follow him on Instagram @thatjeffreyguy