When Wounded Warriors Start Coming Back 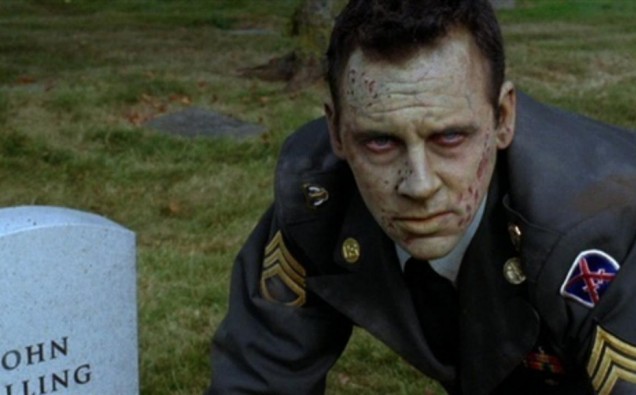 When you think of controversial directors, Joe Dante is not the first name that comes to mind. While Gremlins was the subject of some scrutiny when it was released (largely due to the PG rating despite scenes like this; kids movies in the 80’s didn’t fuck around), overall the Small Soldiers director is a fairly tame artist compared to the likes of, say,  Takashi Miike. Given that, its a little surprising his debut Masters of Horror episode was one of the firsts seasons most controversial, or at least most divisive, and not for the reasons you’d think.

No, instead Homecoming committed the morally inexcusable sin of featuring left-wing politics, proving once again that America is more than ok watching a kid get his dick bit off, but can’t take the fact people have different opinions. Whatever, the Ted Cruz crowd probably was never going to get behind a story featuring veterans coming back to life and voting democrat anyway.  Honestly, your political beliefs really should have no effect on whether you enjoy Homecoming or not anyway, or any work of entertainment for that matter. Being a fair critic means looking past your personal bias’s to judge a piece on it’s own artistic merit, and saying that, this is a damn good episode. 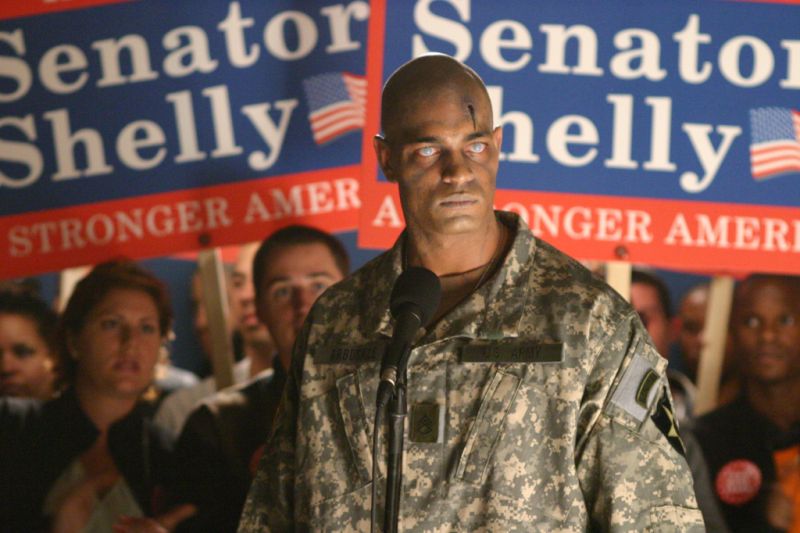 Based on an excellent short story I read some years ago, Homecoming follows Republican speech writer David Murch, his saucy, hot-headed girlfriend Jane Cleaver, a not-so-subtle stand in for President George W. Bush, and a pretty great take on the undead. It’s not a virus, voodoo magic, a passing comet, or any of your traditional zombie shit that brings on the brain munchers. It’s a desire to bring end the Iraq War. Say what you will about the intelligence and reasoning behind invading the Middle East, but a whole lot of people lost their lives on both sides of the conflict. Enough at least that there’s a sizable army when the deceased come back.

But beyond their origin, Homecoming’s dead have some other unique traits. Rather than eat flesh, spread disease, or murder the innocent, the zombie soldiers live a relatively peaceful afterlife, seeking only to stop the violence in the only way they can; the democratic process. Indeed, the zombies grand plan is to vote in a president who will end the war, and finally leave the proud warriors at peace, knowing no more of their brothers are dying for a lie.

One thing I love when a horror films does it stretch the boundaries of the genre, something Homecoming manages quite nicely. For a film featuring zombies, there are in fact very few scares. Instead, we get an intelligent, often poignant anti-war story that just happens to feature the undead and a handful of gratifyingly gory deaths. If your one of the jump scares only crowd, Homecoming might bore you to tears, but for those looking for something different in genre films, this will be a treat.

The only big negative on display here is a good old-fashioned lack of bipartisanship; Homecoming is more liberal than Bernie Sanders in a go-cart whose steering wheel only turns left. The film is only an ounce of pot and a bad haircut away from being a full-blown hippy. As a journalist (albeit one who mainly writes articles on gore films and grotesquery) I always like to see both sides of an issue; while I won’t get into my own politics here, I will say the Iraq War was a lot more complicated that Dante has portrayed.

But like I said before, Homecoming is a piece of entertainment, not a CNN news report, and yeah, it’s pretty damn entertaining. Maybe it’s just a burn out from traditional zombies kicking in, but I have a special place in my black heart for any film featuring an unconventional look at the Undead. Overall, its just another really solid episode, really living up to the series title, Masters of Horror. And it helped wash the taste from the crap-fest that was the previous weeks Chocolate, so that’s a plus. But I won’t start lying now guys, I’m a lot more excited for next weeks episodes, and one of my favorites from the whole series; John Landis’s Deer Woman. Until then though, its been a pleasure, and as the old long hair’s would say, peace the fuck out!

(P.S. sorry for the erratic release schedule, being a full time student can be a bitch. Well start up like regular oagain n Friday, March 12th)