Think Avengers, but with more knives in people chest cavities 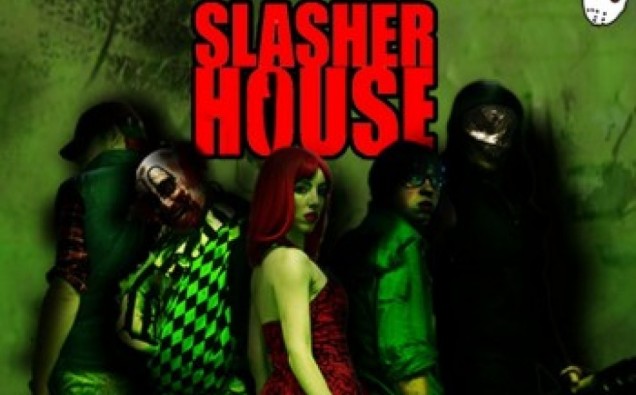 Like slasher movies? I know I do! So, when I found out about the shared slasher movieverse being put together by MJ Dixon, I had to get all the deets! Here’s the scoop!

John Lepper: Thank you, Mr. Dixon, for this opportunity to interview you. You’ve put together a series of slasher films, all taking place in the same universe. Sort of like the Avengers films, but with killers. It’s an amazing idea. How did you come up with it?

MJ Dixon: Thanks for having me. Well its kind of funny, it gets compared to Avengers quite a lot but the idea was based more on a business model that I came up with in 2005. Blockbuster was looking for low budget Horror to fill their shelves and I had this idea of making a bunch of films that were seemingly just low budget horrors, but the overarching story would be connected in secret and the idea then was that it would become apparent only over a certain amount of time.

The plan was to do Hollower (The Nathan movie) first, then Thorn, then Cleaver and then do a kind of House Of Frankenstein style movie with all of them, which would be Slasher House.

As you know Blockbuster had some financial troubles and stopped commissioning work by the time I could get the projects off the ground and being impatient I was excited about getting to Slasher House and so ended up doing that first on impulse with the intention of using the film as a kind of 90 minutes set of trailers for these Characters. Ironically we now called it reverse Avengers here.

JL: Awesome! Well, I’m glad you didn’t let Blockbuster’s issues slow you down. Now, it is very apparent that you are someone passionate about the slasher genre. How do you view slasher films in general?

MJD: I think theres certainly a view amongst a lot of the community that slasher films are somehow the lowest art form of horror. To me they are the most fun you can have watching a movie. I think they appeal to me as a fan because I can go in with low expectations and be surprised more often than not because I’m really looking for a variation of the formula that we know so well.

As a filmmaker, that formula gives me amazing creative freedom as its something that film fans understand on instinct and so you can start to play with that expectation and your audience can get on the same page as you very quickly because if you’re a horror fan you understand the tropes of this kind of film.

I love slasher films and always have down, so to me it was kind of a no brainer to start making my own when the time came.

JL: I agree, it’s more about the fun. I don’t think too many people find slasher films “scary”. But they can be the most entertaining by far. I realized my love for them stems from a combination of two things. Horror and superheroes. Mix the two and what do you get? Slashers! Powers, secret origins, and they just don’t stay dead. And your characters have made amazing additions to the genre. Of the ones you have created so far, who would you say is your favorite?

MJD: I agree. I always kind of think of our movies as backwards superhero films, You’ve heard of the Hero’s Journey right? Well I see our films as the Villain’s Journey

My favourite has always been Thorn, I think. He was created when I was a teenager as a kind of antidote to what they had done with Michael Myers in the Halloween franchise after Jamie Lee came back. He’s my classic slasher and there so much fun that can be had with archetype.

In a way though they all have a place in my heart. Red is the most fun to write, because she’s kind of anti-slasher, I think of her as a kind of Blade character in that she’s a slasher, but uses that for good (kinda). Its fun also writing a character who has limited morality, yet is still the ‘good guy’ so to speak.

JL: Lol, I was wondering if there was some connection to Thorn and the mark of thorn from Halloween.

I do like Red. I have mentioned to you that she reminds me of Cassie Hack from Hack/Slash to a degree. I would love to see more of her. With all the other characters from Slasher house getting their own movies, can I expect to see one about her?

MJD: The Thorn thing is kind of a weird coincidence as he was named after Damian Thorn from The Omen due to his hellish origins, which will be covered more as the series progresses, but I kind of like that they almost feel like an unofficial continuation of the Myers story, albeit very different in style.

I’ve always seen Red as kind of Buffy meets Dexter, but her origin really suited the story at the time and we were originally going to scrap that part of her character, but it just suited the story so well. I’ve since become a fan of Hack/Slash and it was a bit of relief to see that we were doing things very differently from the same basic idea.

Slasher House is really Red’s story and so as we move forward with Slasher House 2 this year the plan is to tell her story through those movies and where we see her go is very exciting, for me at least.

JL: Awesome! Can’t wait to see it! Well, I am very well aware of the films you have out and that are coming out, but some of our readers might not be. Why don’t you give a short rundown on what you have done so far and your plans for the future?

MJD: No problem. First up is Slasher House, a kind of rouges gallery of some of the slashers that make up this huge shared universe that we’ve got planned.

Then Legacy of Thorn which delves further into the origins of one of the most popular Slasher House characters and introduces a huge cast of its own. It quite a complex myths that we’ve built for him and so it really needed a feature to lay it all out.

We just finished production on two more prequels that tie into Slasher House directly with Cleaver : Rise of the Killer Clown, which is an out and out origin story of the character and sets up where we’ll be taking the character over the next few years.

And finally in October we snuck off and made a very small, very low budget movie called Hollower, which tells the Nathan that we hinted at in Slasher House with the intention of bringing more depth to it. The film also stars Nicholas Vince of Hellraiser/Nightbreed.

We’re now currently working on Slasher House 2 which starts to build a on the bigger picture that these films are setting up.

JL: Sounds like quite an ambitious vision! And how big do you hope for your movieverse to get?

MJD: When I started out, I figured it would get to Slasher House and then we’d be done, But as it goes on and these characters get richer and their backstairs grow and evolve I’d say that it could go forever potentially. Currently though there are between 16 and 21 films that tell the full story i terms of the characters that we’ve already met (or will meet in the next couple of films).

In all honesty though, I have no real idea. I have a general arch that I’m working with and things change as we go. For Example Cleaver came around much earlier than anticipated to replace something else that we could get off the ground in time, so its constantly evolving.

I think that as long as people are enjoying them, I’ll keep making em.

JL: Sounds great! Well, I hope you keep them coming! I can’t wait to see Cleaver and Hollower. I just want to say thanks again for taking the time to do this interview. Before I let you go, do you have anything else to tell the readers?

MJD: Just that your support means a lot, we’re not a big Hollywood studio, we pull these things together on spit and glue and sometimes we don’t even have that lol. But every share of our stuff, every movie bought it all really goes into us making bigger and better movies and we are incredibly thankful to everyone who has supported us this far.

Thanks for having me, its been pleasure.

Sounds cool, yeah? Check out legacyofthorn.com where you can pick up a copy of the latest film in the series to be released!