Monsters from the Briny Deep

Our planet's oceans are home to creatures that are as scary as monsters in a horror movie. 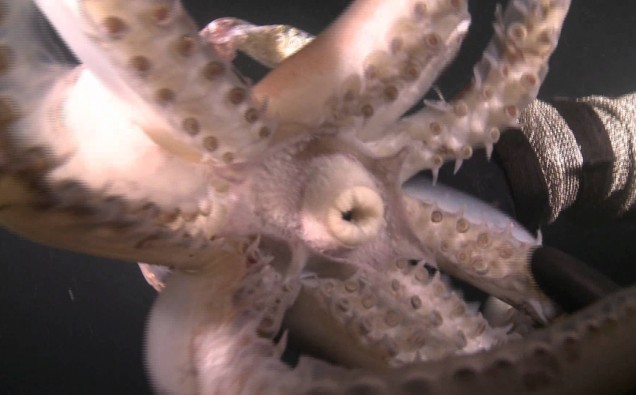 Although Jaws, Deep Rising, and Open Water scared people enough to stay on the beach, our planet’s oceans are home to many frightening creatures.

Check out these different types of marine life to fuel your nightmares. 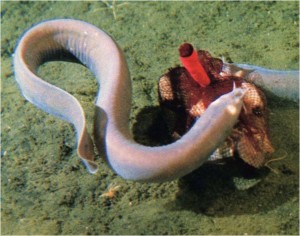 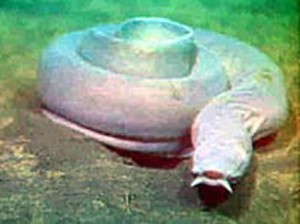 The hagfish is possibly Mother Nature’s most repulsive child. It is about three feet long with an eel-like body, pink or light brown in color, and capable of secreting a gallon of thick, toxic slime at a time. The slime is strong, viscous, and reinforced with tiny fibers. When unsuspecting fish swim into the hagfish’s range, the slime is released, coating the other fish’s gills and suffocating it.

This is not the grossest thing the hagfish does, though. Its preferred method of eating is to swim up beside a larger fish and attach itself, using its jawless, lamprey-like mouth. The hagfish then bores into its hapless host and slithers inside its body. A specialized rasping tongue called a radula is then used to devour the host fish alive, from the inside out.

Hagfish are often found as bycatch in deep-sea fishing nets. They are the bane of fishermen, as their noxious slime can spoil an entire net’s catch.

If that wasn’t creepy enough, many hagfish species are hermaphroditic. They also have four hearts, but no vertebrae or bones. 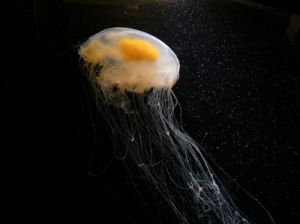 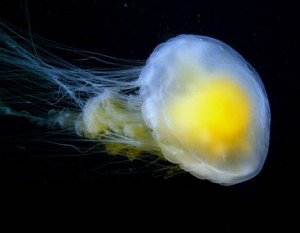 Phacellophora camtschatica is popularly known as the fried egg jellyfish due to its startling resemblance to the common breakfast item. However, the jellyfish is much larger, about two feet in diameter, and has hundreds of tentacles covered in harpoon-like stinging cells called nematocysts.  Its preferred diet is smaller jellyfish, which it stings, then absorbs into its body for digestion.

Despite its large size, the fried egg jellyfish’s venom is not especially strong, and juvenile crabs are often seen living on their bells. It is often mistaken for the more toxic Lion’s Mane jellyfish. 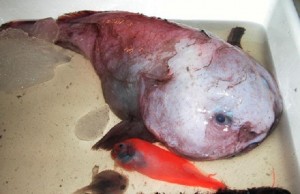 Dwelling in the deepest depths of the oceans off Australia and New Zealand is the blobfish, which has been voted the world’s ugliest animal. The blobfish is primarily composed of a gelatinous substance of a density slightly greater than water, which allows it to live at the extremely high pressure found at the bottom of the ocean. However, when they are brought to the surface, the much lower pressure causes their bodies to become distorted into shapeless blobs with hideous faces.

Despite their grotesque appearance, blobfish are harmless plankton eaters. The Ugly Animal Preservation Society has adopted them as their mascot. Blobfish numbers are decreasing as they are often found as bycatch in bottom trawling fishing nets.

While the other animals on this list are terrifying and/or disgusting, they do not pose a threat to humans. The Humboldt squid, on the other hand, has numerous documented attacks on people. This carnivorous invertebrate can grown up to six feet in length and weigh 100 pounds. They hunt in packs of up to 1,200 individuals. Their tentacles have 100 to 200 suckers, each lined with razor-sharp teeth. Their baseball-sized beaks can easily tear through human flesh. They are even capable of launching themselves briefly out of the water and through the air.

Humboldt squid use color-changing cells called chromatophores to change the color of their skin. They flash red and white at each other as a means of communication, a habit that has earned them the nickname “diablo rojo” (red devil) from Mexican fishermen.

The Humboldt squid’s range is increasing northwards. While it was named for the Humboldt current of the eastern Pacific, it has recently been found as far north as Puget Sound. Scientists believe that warming ocean waters are responsible for this alarming trend.

Pictures of this amazing creature can’t do it justice, check out the video below of a diver getting attacked by a Humboldt squid.

I have no doubt this creature will be inspiration for a future horror movie, what are some sea creatures that scare you? Let us know in the comments section below.