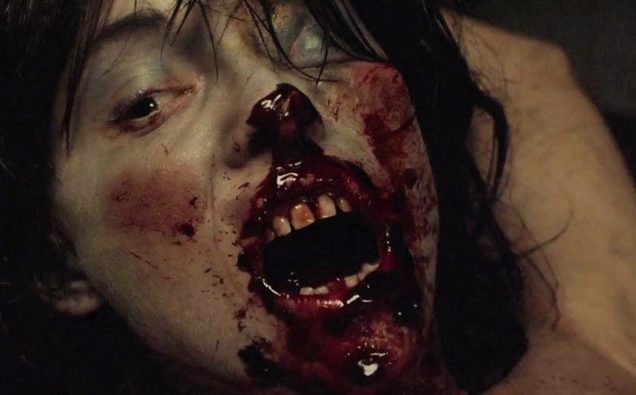 “Deadgirl” is my weekend movie recommendation for those of us who watch horror flicks that “go there”, you know what I mean; movies that handle horrific subjects and still manage to tell a great story. “Deadgirl” premiered at the Toronto International Film Festival back in 2008 and is a movie that has had a lot of people wondering whether it’s really a horror film, or more of a sick twisted romance. I decided to watch this movie after looking through a list of the Top 10 Most Disturbing Movies. This film definitely fits into that list for me, and it really does seem to defy genre.

“Deadgirl” made me wonder how people can be so brutal. Usually if there is a zombie or undead creature in a movie, then they always end up being the monster, the one people are running away from or getting eaten by. In that case we don’t feel empathy for the zombie in question. In “Deadgirl” the tables are turned and the so-called zombie is the victim and the supposed humans become the monsters. This is not a movie for the faint of heart, a date night in with popcorn or for anyone with a sensitive stomach. I think though, it is worth watching, but I don’t know if I would have been comfortable watching it with anyone else. It’s very upsetting, yet fascinating and it made me squirm quite a few times. I was glad it was filmed a bit dark, because some things are best left to our imaginations. Not to say that this movie leaves that much for you to imagine. “Deadgirl” is a very graphic movie. It is compelling because it is a study of people, looking into the dark side of the teen boy libido and peer pressure. It also seems to be a metaphor for the dead-end life the boys J.T. (Noah Segan) and Rickie (Shiloh Fernandez) have to look forward to. It makes us wonder what the definition of “human” really is. Where is the line? How far someone can go into cruel and horrible behavior and still be considered a sane or normal human being?

So what is “Deadgirl” about? The basic story is: Two burnout teen boys cut class one day to go hang out at a local abandoned insane asylum. Sounds like a regular horror movie, so far. While drinking beer and wrecking the place, they come upon a nude girl they think is dead, gagged and wrapped in plastic. When they figure out she is still kinda alive, Rickie wants to call the police, but J.T. decides “We could keep her,” and he wants to leave her there for a sex toy. Not so much a regular horror flick anymore! That scene right there gave me the creeps. And it gets steadily worse. Add in more troubled teens, rape…well you have to see the movie for yourself. Rickie tries to be a stand-up guy and stay away, since he’s in love with a girl at his school, JoAnn, played by Candice Accola. But by the end we see that Rickie is sadly, no different from the other boys, who are using the dead girl as an sick object.

The script written by Trent Haaga is complex and unique. It makes us think a lot about what is right and wrong. (Mostly wrong in this case) Directors Marcel Sarmiento and Gadi Harel make some ballsy choices. We watch relatively normal characters break down when something perverse is dropped in their laps. One becomes a total sociopath right off the bat and the other falls down into depravity a bit slower, but with no more noble of an outcome, no matter what he thinks. The acting is incredibly well done, especially by relative newcomers Segan and Fernandez. It must have been a strange movie to work on. I have to say I felt sorry for actress Jenny Spain, who plays “Deadgirl” herself. Not a fun role to play, totally nude most of the time, in very uncomfortable situations, but she does a great job anyway, bringing out her character with just the expressions in her eyes.

“Deadgirl” is a dark, brooding movie that goes deeply into the places in our minds that we don’t want to believe can exist. Adolescence is a confusing place at best, and these boys don’t handle it well. Is it a zombie movie? Technically, yes. But it is more a study of human nature and teen angst. The film made me ruminate about a lot of things. About the inhumanity we bring against others. It made me think about my own teen years and the mistakes I made. It made me wonder what could have been done differently in the movie character’s lives, so this would never have happened. I wondered what happened to the doctor from the asylum who created her and then left her there wrapped in plastic. I really wanted to know who the dead girl was before this horrible thing happened to her. “Deadgirl” was disturbing and yet sadly romantic. I think all horror fans should see “Deadgirl” at least once. If you can get through it, this film will definitely give you a lot to think and talk about.