Movies that are based on the Twilight Zone and you didn’t even know it.

Many say "Most ripped off", others say "Most Influential". 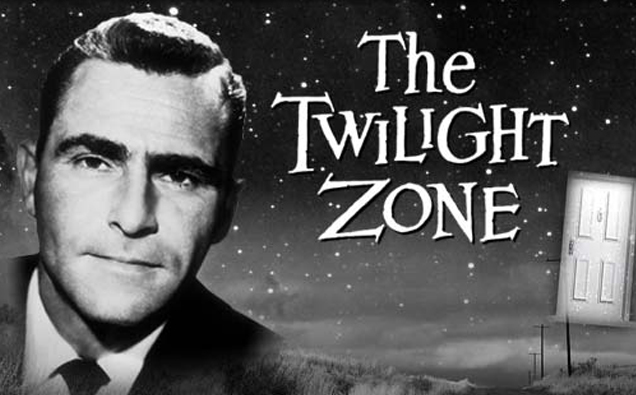 One of the few remaining good things about Netflix is their library of television series. In the rare moments I get the TV away from my kids and I get to put in some Dad TV time, I still need something that is OK to watch while my kids are running in and out of the room (My whole horror library is off the menu for the next six years, minimum). So I see this as an opportunity to turn to the golden age of classic television.  One of which is The Twilight Zone. I can’t say this is a series I grew up on, especially being the only child in the world who barely ever had cable TV (and who now boycotts it) but I have noticed that this series is completely alien to the vast majority of people under 35. This is a shame as the series is a cultural phenomenon that is ingrained into all of western culture forever. Even people who have never watched a single episode in their lives know the theme music by name. You can go up to just about anyone on the street and ask them to do the Twilight Zone music and they will go “Doo doo doo doo – doo doo doo doo”.

So it’s no surprise that many movies echo themes and ideas from what is one of THE most influential series ever made… but some downright just take an entire episode’s plot. And due to today’s generation having never seen the series, most people don’t even have a clue. I was inspired to make this list when I watched #5 and it blew my mind. So let’s begin.

I want to note that Final Destination’s other plot half included the old philosophical question created by the parable An Appointment In Baghdad where a Sultan is approached by his gardener who sees Death in the Palace garden and upon seeing him, Death raised his arms to him. The Sultan gives the man his finest hoarse and tells him to flee to neighboring Baghdad. Then the Sultan finds Death in the garden and scolds him “Why did you scare my gardener like that?” to which Death replies “I meant not to scare him, I was merely surprised to see him as I have an appointment with him in Baghdad.”

Child’s Play features a doll embedded with the soul of a serial killer. The doll has a string that when pulled says says the phrases that are expected… when others are around. When you’re alone it’s “I’M GOING TO FUCKING KILL YOU!” at which point your ass is his cutlery storage block. In identical fashion the TZ episode Living Doll is a doll embedded with a demon that has a string that when also pulled, says cutesy phrases until it’s alone with you, then it’s “I hate you and you’ll be sorry. In fact I’m going to could kill you.”

While Poltergeist dealt mostly with ghost and a severely haunted house built over a graveyard (And the secret grave of a mass cult suicide), it’s prime plot line was their young daughter being pulled through a dimensional portal in her bedroom closet and her parents can only hear her cries for them. She is later rescued by her mother who enters the portal tied to a rope and pulls the girl back out. In the TZ episode Little Girl Lost, a husband and wife discover that their little girl is missing and can only hear her cries for them in her bedroom. It isn’t long before they discover a dimensional portal in the wall next to her bed. She is rescued by her father who enters the portal while tethered to a rope.

In Cube a group of people, each with different background and no memory wake up in a sterile box and have to work as a team to get out only to discover a big secret behind their imprisonment. This is the same with the TZ episode Five Characters In Search Of An Exit. The difference between the two is in the ending where Cube was a new government prison and Five Characters was toys in a Toys-4-Tots bin.

In The Mouth Of Madness

In The Mouth Of Madness is a story of a man sent on a mission to investigate an author who has gone missing and who’s books are driving people mad. Eventually he discovers that everyone of these people is a fictional character… including himself. In the TZ episode A World All His Own is about a woman being sent on a mission on behalf of a publishing agency to investigate an author who is nearing his deadline. He uses a dictating machine to record his stories, which he soon shows her come to life. Even his own wife was just a figment of his imagination. In the end the woman find out that more than her visit to him is a figment of his imagination… her very existence.

In Carnival Of Souls a woman nearly escapes death in a car accident and afterwards is haunted by an ominous figure every wheres she goes. In the end it turns out she never escaped her death and it was all a dream in the moment of her death, the ominous figure being the Grim Reaper who was coming to collect her. In the TZ episode The Hitch Hiker the same was completely true.

Real Steel takes the entire plot from the TZ episode Steel, which kind of makes me wonder if the name was done with the same intent behind the cartoons Ghostbusters and The Real Ghostbusters. Yeah it’s not a horror genre but this was the episode that finally inspired me to make this list. It happened a few times before for me that I would be watching a TZ episode and think “Damn, that really matches a movie I know” but this one hit me like a brick. It’s blatant, completely blatant. In both movies an ex boxer is now the manager/owner of fighting robots, which have taken over the sport of boxing due to futuristic laws on humans. Along with his mechanic they are striving to make it in the biz with outmoded and obsolete robots. And the final battle is fought by the former champ through the robot. The differences being the robots in TZ were made to look human, basically terminators, where as the robots in Real Steel were full on robots. Another was the outcome. While the TZ episode had a bout that ends in defeat but earns them the money needed for upgrades to their fighter, Real Steel was a story of winning fights and becoming the champ… but in both cases they were underdog stories.