They took his daughter. He'll hunt them down.
by Tonjia Atomic February 28, 2020

Nest of Vampires is a feature film from the UK’s Chris Sanders. They have completed principal photography and are currently seeking finishing funds via Crowdfunder.co.uk. 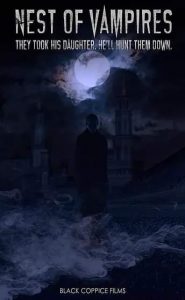 Here’s more about the film from the filmmakers:

Nest of Vampires follows an MI5 agent named KIT VALENTINE who travels from London to rural England in search of the people who murdered his wife and kidnapped his only daughter. During his investigation, he uncovers a dangerous secret society.

We have Tom Fairfoot playing the lead. Tom acted alongside Richard Gere and Hillary Swank in the 2009 movie Amelia. We also have Frank Jakeman who played Lord Vale in Game of Thrones.

Nest of Vampires is on its last day of its post-production crowdfunding campaign as of the publication of this article. To donate for some great perks go to: https://www.crowdfunder.co.uk/nest-of-vampires-post-production-crowdfund