"They're coming to get you Barbra" 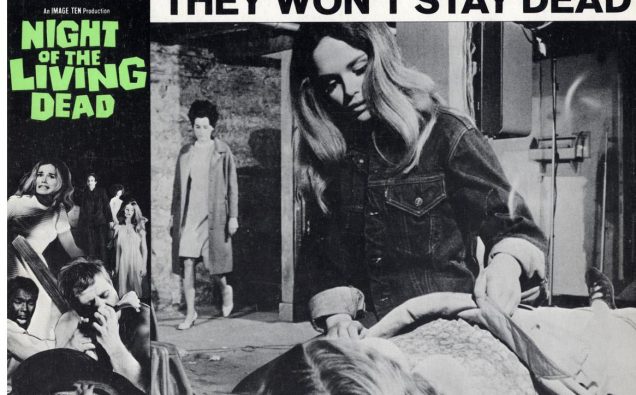 Night of the Living Dead is the movie that started it all; the iconic beginning of the continuing zombie fever. Zombies have never been so popular and this is the movie where it all began! Released 48 years ago (can it really be that long ago?) this amazing black and white film, made for a mere $114,000, is still a hit with horror fans today. Readers Digest Magazine even warned people against seeing it, because it might make them turn into a cannibal. One of the most successful independent films of all times, this also was a movie with many firsts. Night of the Living Dead is one of the first films to have an African-American main character. It is also one of the first films to graphically depict violent murders on screen, and show cannibalism. All a very big deal in 1968.

For those of you that have never seen Night of the Living Dead you must: live under a rock, are locked in a basement or are totally scared of all horror movies. If any of those cases are true- then here is the synopsis of the movie. The nation is panicked when the dead come back to life and start eating people. The film follows a small group of survivors that hold up in an abandoned farm house, trying to stay safe from the flesh-eaters. It does not go well. There ya go! No spoilers. Now, go watch Night of the Living Dead! Or the zombies will get you! 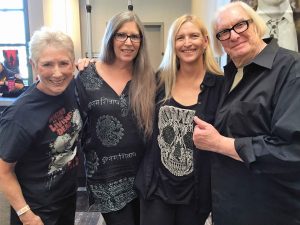 It was a super fan moment for this zombie girl, to meet some of the cast of my favorite movie, Night of the Living Dead at the Son of Monsterpalooza horror convention! Russ Streiner (Johnny in the movie) said I quoted a great “They’re coming to get you Barbra!” I was so excited to get to interview them at the event. So here are some thoughts from Judith O’Dea who played Barbra, Russ Steiner who played Johnny and Kyra Schon who played little Karen Cooper, on their experiences during the filming of Night of the Living Dead.

Los Angeles Zombie Girl: Night of the Living Dead is the iconic movie that started the zombie popularity we see now. How did you end up getting involved in this movie?

Judith O’Dea: “Who you know in this business really helps! I had started in musical theater when I was 15 and as I grew older I expanded into radio and television commercial work. I did a lot of work with Karl Hardman who plays Harry Cooper in Night of the Living Dead. He had a wonderful recording studio in Pittsburgh and he and I worked together many times. After I had left for California to make it big in film, Karl called and said ‘we’re going to be making a film back here, you want to come home and audition?’ and I said sure. So I flew home, auditioned and the rest is history.”

Russ Streiner: “George Romero and I were business partners, for about 6 years, before we made Night of the Living Dead. We had a production company that made TV commercials, business films, that kind of thing. We kept acquiring more equipment, lights, camera equipment and audio equipment for our commercial business. By the time 1967 came around, we found that we had everything we needed including a 35mm film camera and we decided we wanted to do what we called a real movie. And that real movie was Night of the Living Dead.”

Kyra Schon: “I was 9 years old when I played Karen Cooper in Night of the Living Dead. My father was Karl Hardman, the co-producer along with Russ Shreiner and he also played Harry Cooper, my father in the movie. A little nepotism there. Ha Ha.”

LAZG: How did you prepare for your character?

Judith: “It was a moment to moment thing. I had no full script, if there was dialog that had been written, I would get the sides for that dialog. It was a combination of learning what dialog there was, and also listening to George as he would describe what he wanted from the scene. Through that description, the character of Barbra evolved. Every day, something new would come up and Barbra would become more and more real in my mind.”

Russ: “Well in addition to playing the character of Johnny, I co-produced the film with another gentleman, Karl Hardman, who played the character of Harry Cooper. In those days we all wore many hats, so I would like to say it was a difficult casting process, but it was getting closer to the day that we needed to do the cemetery scene, and we still needed a Johnny, so I got tapped.”

Kyra: “I don’t think I did, I don’t think there was any preparation at all. My Dad explained to me what the character was going to encounter, and there was no other zombie movie to draw upon. So he just kind of told me, you’ll be dying, then you’re dead, then you’re back. Between my Dad and George Romero they directed me.”

LAZG: Do you have a favorite story from the movie?

Judith: “One of my favorites was when we were using the car, a Grand Prix I believe, a Pontiac, it belonged to the mother of, I think Russ and Gary Shreiner. Well we shot the first day and used the car, then when it was driven home it got into an accident somehow, and bashed in the whole side of the car. But we hadn’t finished using it yet. When we came back to do the rest of the shot, George just really amazed me and he figured out how I could run the car into the tree down the road by the cemetery. He shot that so well, that I swear I actually ran into that tree, it looked so true. I love that story.”

Russ: “There are so many, not just during the production of the film. It’s ironic though, as young filmmakers, we had no idea that the modest little film we were working on in Pittsburg, Penn, would go on to become the classic that it is. Night of the Living Dead will come up, in 2 years, on its 50th anniversary, being in distribution! That’s amazing to think of.”

Kyra: “The funniest thing was probably when my Dad’s character Harry gets shot. He would fall down the basement steps, and he kept getting caught in the coat tree, that was near the wall, and it would follow him down the stairs each time! They kept re-doing it and re-doing it and it was so hilarious, everyone was in tears. So when I see the scene where my dad gets shot, I start laughing because I remember that. It was very funny!”

LAZG: What was it like working with George Romero?

Judith: “George was really wonderful to work with. Even with no complete script and making up things up as we went along, all the pieces to the puzzle fit together. George’s mind is like a computer. He knew exactly what he wanted and was able to communicate that to us. When something didn’t go right, he made it work! It kept us on our toes. Night of the Living Dead holds up well even today!”

Russ: “George and I had a pretty substantial history prior to making Night of the Living Dead, including sharing apartments together, that sort of thing. George, I always felt was always the most creative person I’ve ever worked with. And I think in many ways the feeling was mutual. At least I hope it is.”

Kyra: “He was really a nice guy. Although he didn’t direct me so much as he passed on the directing duties to for me to my Dad. I guess because he figured I would listen to him better, but I would have listened to anyone. George was really good, he was funny and it was the first time I ever heard an adult drop the f-bomb, and I remember that he did it rather frequently! The first time he did it, I looked at my Dad and said, ‘it’s not ok for me to say that, aren’t you gonna yell at him?’”

LAZG: Are you a horror fan?

Judith: “I am a horror fan yes, and you know why? It’s because of all the horror fans I have met. I might not gravitate towards horror films as a first choice, but with horror fans, I have met some of the finest people in the world. They are the most dedicated, supportive people and I love horror because of them.”

Russ: “Not quite so much, but horror is a genre that is a gateway for many young filmmakers, so on that level I appreciate it quite a lot. I sometimes wish that young filmmakers paid a little more attention to their storytelling aspect of making films and not just trying to grab our attention with graphic gore.”

Kyra: “I am a horror fan and I didn’t have any bad dreams or a bad experience from making the movie as a child. I loved horror movies at that time and I still do, I started watching horror movies when I was only 4 or 5 years old.”

Judith: “Now that I have lived the apocalypse through Barbra, I don’t think I would feel the need to run inside again! I think my weapon of choice would be to run, to get as far away from any of the zombies, find a nice little niche, and get to some quiet little island somewhere, where it hasn’t happened yet.”

Russ: “I think my weapon of choice would be my wife Ramona. She’s German and pretty ferocious when she has to be!”

Well, since no one survived in Night of the Living Dead– (sorry spoiler)-you all made zombie history and as horror fans we are so glad you did. Thanks so much to Judith O’Dea, Russ Streiner and Kyra Schon for spending some time making this zombie girl very happy!