Ready or not, here it comes... 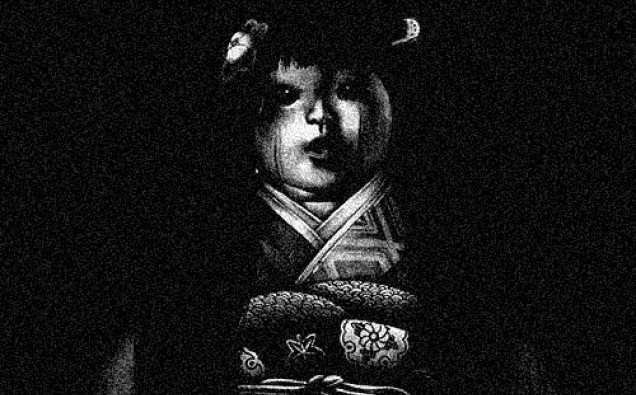 I’ve always wanted to try a Ouija Board. Problem is, I can’t find anyone else to do it with me. Apparently, no one else shares my morbid sense of “adventure”. But you, you reading this, you get me, right?  Sure, the act of doing such a thing is rumored to make an opening for the dead/demons to come through & make life hell, but that’s just a minor detail. Who knew a parlor game created by a businessman back in 1890 had so much power? My point is that the whole concept of a Ouija Board seems pretty outlandish to me. It’s not because I don’t believe in ghosts or anything (though I am skeptical). The problem is that it just seems a little too easy, doesn’t it? The idea that you can contact the dead with a board of letters & a stone/cup/whatever-the-fuck without any other preparation seems lazy ritual-wise. I just find it hard to take seriously…unlike “One-Man Hide & Seek”.

You’re right, voice in my head. Let’s call it by its Japanese name, because anything sounds scarier to an American when it’s in a foreign language. In Japan, it’s known as “Hitori Kakurenbo”. Despite how innocent it may sound, it’s anything but. The name is also lying, because you’re not by yourself at all.

Before you can enjoy a nice session of Hitori Kakurenbo in the comforts of your own home, you’re going to need a few things. This list includes:

First things first, you have to name your stuffed stalker (foreshadowing). Once you named that cuddly offering you’re about to sacrifice, you get the pleasure of cutting that sorry bastard open & pulling out all its stuffing. Still with me? Good. As logic dictates, you then replace that freshly reaped stuffing with rice & your fingernail clippings…of course. Once it’s filled up on rice & part of your body, you have to use the needle & thread to sew that baby right back up. Remember, it has to be a long red piece of thread. Red to symbolize “veins” or some weird shit, & long so you can wrap the excess around the doll’s body like you do to your girlfriend whenever you guys are feeling experimental. I know all about your sex life. We all do. Kinky.

After all that is said & done, wait until 3 A.M. & then fill your bathtub with water. Hold your freshly mutilated friend (the doll, in case there’s any confusion) with both hands, then say this 3 times: “(your name) is the first it.” Right after that, drop your rice-filled companion into the water. Run as fast as you can & turn of all the lights. You’re allowed to keep your TV on, but only if it’s tuned to a station full of static. I’d say this would be a good idea, if you ask me (you’ll see why later on). Once that’s done, close your eyes & count to ten. Next, open your eyes, grab your sharp tool (a small pin to play it safe, a butcher’s knife for those who are more daring), go back to the bathroom, & say “I have found you, (doll’s name here).” Grab the soaking wet doll & stab it. Stab it to hell. Go straight up Michael Myers on its ass. Stab it. Stab It! STAB IT!…yay, you won.

Now it’s the doll’s turn. Say “You are the next it, (doll’s name here).” Leave the sharp object impaled in the doll & put it back in the bathtub. Quickly (& I mean quick-fucking-ly) run out of there & hide quietly (quiet-fucking-ly). Where you choose to hide is up to you, though closets are considered the “safest” areas. If you’re feeling confident, go ahead & hide under your bed or something. No matter where you go, always be sure to have a glass of salt water with you.

Once your get to your hiding spot, stay there & stay quiet. Listen. Wait. It’s been said that a plethora of weird occurrences are to follow. Voices, footsteps, sounds of things being moved, horrible smells, temperature changes; all that good stuff. Remember the TV you left on? Turns out the volume of it will increase dramatically & it’ll turn off whenever your stuff stalker (see, it makes sense now) is close to you. It’s also possible for you to feel pulled or touched; try your best to ignore it. The goal is to stay hidden until sunrise.

Once you make it to sunrise, or when can’t stand it anymore, you’re ready to start the “ending ritual”. First, pour half of the cup of salt water into your mouth, being sure not to drink it. Keep the cup with the rest of the salt water with you as well. Second, get out of your hiding place with the intent to look for the killer doll who is looking to stab you with whatever you stabbed it with (oh yeah, bet you’re regretting using you husband’s Ka-Bar to stab the shit out of that teddy bear, aren’t you?). Please note that the doll will most likely not be in the bathroom. Whatever happens, no matter what, do not spit out the salt water. Third, when you find the your little would-be assassin, pour the remaining salt water from the cup over it before spitting the salt water in your mouth onto, too. Lastly, say “I win” three times. For safety measures, it’s a good idea to dry the doll, burn it to ashes, & discard the remains.

All of this deals with allowing some sort of demon (or Oni, in Japanese) to possess the doll, & if it catches you, it’ll stab/kill you. That or you’ll get ill, or into some sort of accident, or something will possess your house, or something…bottom line, nothing good will happen. For me, this is officially on my NOPE list because there’s too many steps involved for me to believe it’s a total fake. If you want to give it a whirl, though, be my guest. Just be sure to tell me all about it. Good luck!