“I’ve got something better than cash - I’ve got a story.” 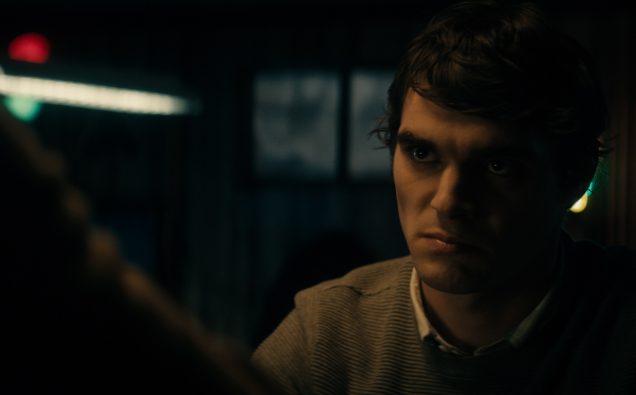 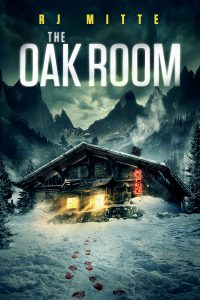 A slow-burn tale that will keep you hanging on every word, The Oak Room, directed by Cody Calahan and written by Peter Genoway is a neo-noir horror film with a subtle atmospheric approach. With a cold opening shot of a beer bottle and something violent going on right behind it, it’s not difficult to guess there will not be a happy ending to this story.

Synopsis: During a raging snowstorm, a drifter returns home to the blue-collar bar located in the remote Canadian town where he was born. When he offers to settle an old debt with a grizzled bartender by telling him a story, the night’s events quickly spin into a dark tale of mistaken identities, double-crosses, and shocking violence.

We’ve all heard the lines “A guy walks into a bar” or “It was a dark and stormy night.” These particular openings to anecdotes have been used to the point of becoming a joke. But without actually saying them out loud, this really is the setup for The Oak Room.

Now, I’m not trying to say that’s a bad thing, just a fact. Every tall tale has a beginning, and this film is all about storytelling; lots of storytelling. Almost the entire film takes place in one of two bars, except for a few ventures out into the snow.

The Oak Room has one of the smallest casts I’ve seen recently, (maybe because it was adapted from a 2-Act play) and all men, but what a terrific cast it is.

The Oak Room is written by Peter Genoway and is based on his play of the same name. Directed by Cody Calahan, the moody film begins with a young man walking into a bar right at closing time; a bar where it turns out he is not very welcome.  He has returned to his hometown, despite the snowstorm raging outside. When the bartender Paul, (Peter Outerbridge) recognizes his after-hours customer Steve, (RJ Mitte, Breaking Bad) he is not happy to see him. Cheers, it is not. Steve is a local who went off to college years ago and never came back. Not even when his father died. Paul was a good friend of Steve’s dad and ended up paying for his funeral. Paul endeavors to make the unwelcome “college boy” feel extremely guilty about that, and Steve offers to tell him a true story that happened a week ago, to hopefully pay off his debt.

Steve tells a tale about events in another bar, in another small Canadian town, also in the midst of a terrible storm. He even brought a coaster to prove it. In this other bar, which is of course The Oak Room, we flashback and meet another bartender attempting to close for the night as well.

Bartender number two, Michael, (Ari Millen) seems ok, maybe a bit high strung, but when a well-dressed man comes in (don’t people lock doors when they close a place?) cold and travel-worn he agrees to let him dry off, get warm and have a drink. Michael then has a story of his own that weaves in and out of the film, almost all the way to the end. This particular story about a pig will stick with me for a long time.

The film goes back and forth between stories and bars. Paul even tells a great story about Steve’s dad Gordo (Nicholas Campbell) who in turn has a story for him. We’re left to guess what’s real and what’s “goosed” as Paul says. With meta self-awareness, our storytellers endure various snowstorms in flashbacks within flashbacks. This non-linear approach was an interesting narrative device and as the film goes on, we start to figure out what stories are real, which are embellished, and which are downright lies.

What I liked: Jeff Maher’s neon-colored cinematography was inspired and enhanced the moody mysterious feeling throughout.  All the actors gave excellent performances and I loved examining the weird phenomenon that happens in the wee hours at bars. Sit long enough with any bartender, and you will tell them about your life. It is just a fact.

I also loved the score by Steph Copeland. Without being intrusive, it was always there, setting the mood, keeping us on edge. But if you listen closely there are all kinds of little sound effects that add tension and can tell us things about the characters if we listen closely.

The main thing that kept it going was the terrific acting. I loved everyone involved. Standouts for me were, Peter Outerbridge, Nicholas Campbell, and Ari Millen.

There is no lightness here, this is a heavy film.

It’s never a question of whether things will go well, it’s when will it all go bad? Right from the beginning, we are served up a beer, a dark unhappy reunion, and many stories, some true, some not so much. But keep watching, things will get horrifying I promise! I liked this film; I think because I like theater and I could almost picture this being presented up on a stage. Also, with all the storytelling The Oak Room can be likened to a murder mystery, which I also love, so it worked for me. Pay close attention to everything. Things are not as they seem, or people who they say they are. The devil is in the details, as has been said.

Sometimes I got a bit lost, and Paul says it well to Steve partway through the film, “You’re telling me this story backwards? If I’m this bored by the ending, why am I going to bother with the beginning?” It was an excellent question, and yes, I was experiencing that too. But I’m glad I stuck it out. The story picks up violently towards the end—and the point does become very clear. And WOW, what an ending it is.

With a neo-noir feel, I never felt as personally involved as I do with some films. It was more like peeking in a window and seeing a bad thing happen, but not being able to do anything about it. That is a very helpless feeling, but in this case the top-tier acting and surreal aesthetic makes everything click into place by the end. Do I wish I could have been more invested in all the stories? Yes, but the non-linear style kept me guessing all the way to the end.

A slow-burn, subtle thriller, The Oak Room could be a little too slow for some viewers… but If you stick it out, this atmospheric and compelling story eventually pays off and is definitely worth the wait.

The Oak Room will be available on Digital Download April 26th, 2021