"There is no fiction, no lies! This is reality!” 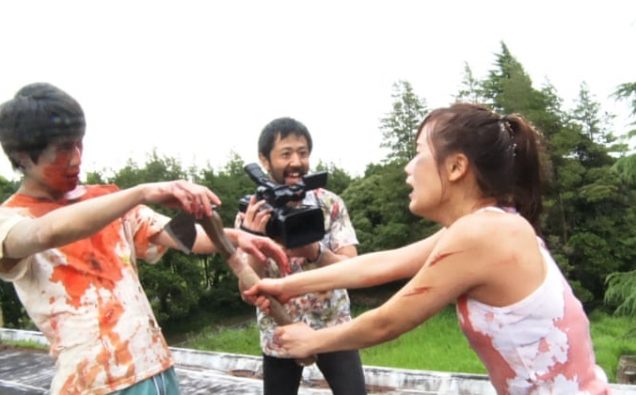 Unique and energetic, this micro-budget zombie flick is so much smarter and entertaining than meets the eye. 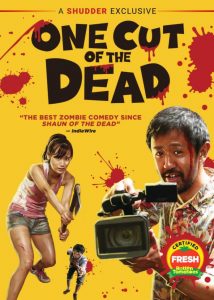 I have been hearing about One Cut of the Dead for over a year now. It was a huge hit in its native Japan and at film fests all over the world. I have been longing to see it, as I am one of the biggest zombie fans around. When I finally got it and started watching it, I almost stopped, because it seemed weirdly awful- how could a movie this bad, be so popular? But I kept going and got the amazing and crazy payoff.

Writer/director Shinichiro Ueda’s slapstick zombie comedy absolutely blew me away. Thank goodness fans of the film have managed to keep the real story a secret. This is a film I could see doing the midnight film fests. It is the epitome of what makes a cult film. 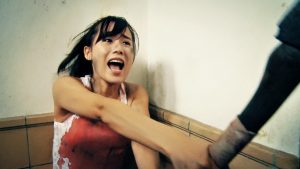 Synopsis: While shooting a low-budget zombie film in an abandoned warehouse, the crew find themselves caught between actual zombies and an insane director who will not stop rolling. If you think you know what happens next, think again. Filmmaker Shinichiro Ueda turns the film on its head more than once for one of the wildest, funniest, and most surprising zombie movies of all time. 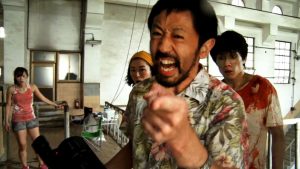 Sounds awesome, right? But as you watch the first deranged and oddly paced 37 minutes, the most remarkable thing is that it seems to be, OMG, yes it is, one long continuous take. Whoever is holding the camera is very athletic, to say the least.

Important to note- when you think it is over, it’s not. Keep watching. This is the key. One Cut of the Dead is not your average zombie comedy. 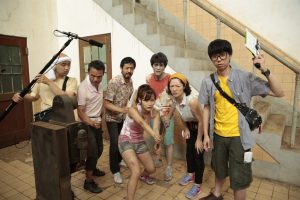 The film starts mid-scene with a young actress Chinatsu (Yuzuki Akiyama) fending off a zombie named Ko (Kazuaki Nagaya) who she seems to be in love with. We figure out quickly that it is a crew shooting a zombie film, this is take 42 and poor Chinatsu has screwed up her lines again.

In comes pissed off director Higurashi (Takayuki Hamatsu) screaming at her and then storming offset. While they take a break, the makeup lady Nao, (Harumi Syuhama) comforts Chinatsu and they hang out a bit before zombie hell breaks loose and real undead start attacking them. Thinking he is the luckiest director ever, Higurashi orders his crew to keep filming, following the terrified cast everywhere. Mayhem ensues, gore and heads flying everywhere, all the way to the blood-soaked finale on the roof.

Zombie and horror-comedy fans alike will fall in love with this film. But remember – Try your best to go into it not knowing anything.

Flashing back to a month earlier we find out what we saw at the beginning, was a live broadcast shot for a new zombie-themed TV Channel. This is where the insanity begins, and we get to see what really happened. We also get to meet the characters on the other side during the “making of” part. Meeting the rest of the director’s family, the crew, and the cast members was so cool. Understanding who they really are and why things go the way they do makes it so much more fun!

I do SFX on horror films. Watching all the things that can go wrong and the crazy crew that works their asses off to make this film happen, made my zombie heart grow bigger. Cast members get drunk, equipment breaks, people get sick, gags don’t work and much of the story ends up being improvised. But as they say, the show must go on- and go on it does, despite everything that happens to keep the live show from succeeding. 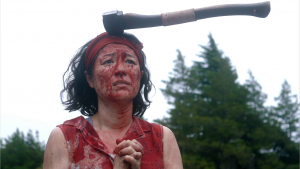 If you have never had the joy of being on the set of a gore-filled zombie film, well here is your chance. For me, it was like going home to a “How to Make a Zombie Film 101” class! Seeing the reasons why the first part of the film looked so odd was hilarious. And the blood- oh how I wish it were me flinging all the wonderful red stuff. This movie had to be a blast to make!

One Cut of the Dead is now available to own on DVD/Blu-ray Steel Book and includes bonus features such as outtakes, POM! Instructional video, and a photo gallery.