Beautifully Grotesque: A Look Back At Eyes Without A Face

Horid beauty concealed by a mask 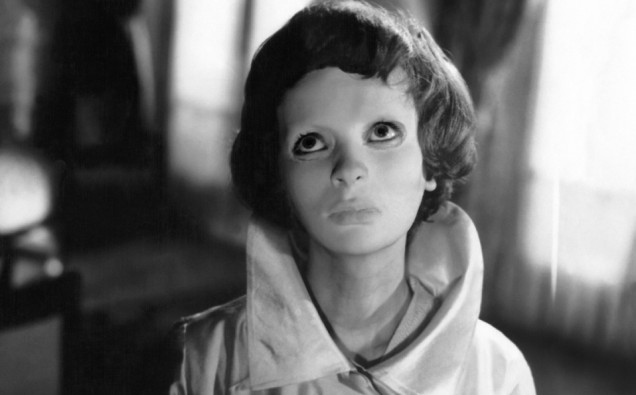 For a film that has been credited with influencing Halloween and being the namesake of a goddamn Billy Idol’s song, Eye’s Without A Face has often been forgotten in the canons of horror movie history. And thats a damn shame, because this little french film is one of the best black and white thrillers ever made, right up there with the likes of Physco and Dracula.

Avid horror connoisseur that I am, it was only after recently purchasing the (excellent) Criterion Collection release I had even heard of it. Why is it then that such a quality piece of art has been so long ignored? Well for starters, its release in the States is a bad joke. Originally released as The Horror Chamber of Dr. Faustus, a poor choice for a film title given there’s no character in the movie named Dr. Fu**king Faustus, it was hacked to kingdom come in an attempt to replicate the low budget “mad doctor” films that were popular at the time.

Another reason is many fans just don’t like watching black and white movies, and they certainly don’t enjoy reading subtitles. But for acute viewers who can look past the language gap, this might just be one of the best, most under seen horror films ever made.

Eye’s Without a Face tells the story of the once beautiful Christiane, a young women who covers her face after it was badly burned in a car accident, leaving nothing but a pair of eyes floating in a mass of twisted, pinkish scar. Her father, the brilliant surgeon Dr. Génessier and one responsible for Christiane’s accident, longs for nothing more than to restore his daughters beauty. Unfortunately for other young and beautiful women, the only way the good doctor can restore a face is to replace it with another. And the methods he uses to obtain them are absolutely horrifying. 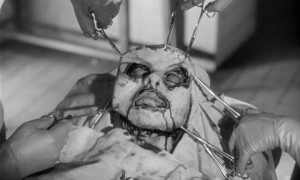 Even by today’s standards, the surgery scenes are gruesome to behold, and when the film came out in the 60’s it was absolutely scandalous. Director Franju famously quipped, “Now I know why Scotsmen wear skirts” after seven audiences members fainted during a screening at the 1960 Edinburgh Film Festival. But, gory as some scenes are, Eye’s Without a Face is far from your standard splatter film; its a work of art.

The story is actually fairly light, focusing more on imagery and mood than following a traditional plotline. Its much more of a character study, paticularily focusing in on Christiane and her father. One of Eye’s biggest success’s is how sympathetic they make Dr. Génessier. Far from a Doctor Moreau or even a Victor Frankenstein; instead he’s a well rounded, complex character. Yes, he kidnaps and performs grisly surgery on innocent women, but not for pleasure or material gain. Génessier is a man racked with guilt, a guilt that looks back into him everytime he see’s the blank mask that covers his daughters ruined face.

That doesn’t justify murder, but it adds a layer of sympathy. In his own words “I’ve done so much wrong to perform this miracle.” Even upon seemingly acomplishing his goals, he is not filled with joy, but instead with bitter regret, at the evil he has sown in an attempt to receive redemption.Even If I can’t agree with him, I can certainly feel his sorrow.

Poor Christiane might have it the worst though. While she is aware of her fathers activities, she never entirely agrees with his methods. She’s wants a face, but the murder and mutilation of innocents that acquiring a new one entails begins to slowly drive the poor girl mad. Her only friends are her fathers dozens of test animals, dogs and birds that unlike humans, are loving and caring regardless of outward appearances.

Eyes Without a Face feels almost like a modern fairy tale, with translucent shots of the faceless daughter surrounded by doves, and themes that invoke a gritter telling of one of fantasy’s classics; with a few modifications this could have made a great fit as a story by the Brothers Grimm. Majestic and filled with life, Eye’s Without a Face is an indisputable classic in every sense of the word, one of the most beautiful horror films ever made.