The Owlman returns with a new terrifying prank!

New movie The Black Gloves on the horizon 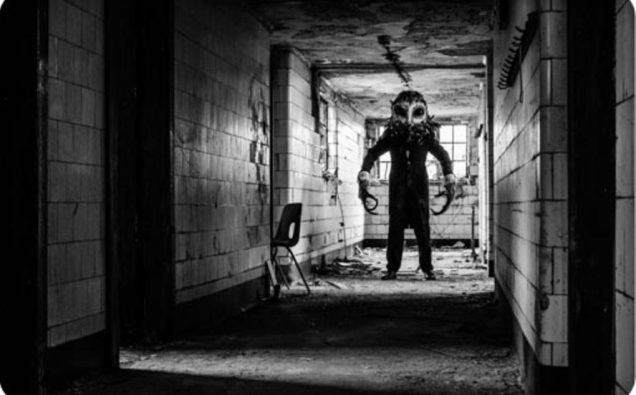 We recently announced that the infamous Owlman from the amazing indie horror film Lord of Tears would be making a return in a new film The Black Gloves. It would seem that in addition to a return to the screen, the Owlman is also back into the scare-prank game. In case you missed it last time, Owlman made quite a splash with some online prank videos when Lord of Tears was in production. And now with a new film coming out, it seems it’s time for take two. From the press release:

The producers of new horror film The Black Gloves have taken the villain of their film to the streets to promote the project.
The Owlman, who first rose to viral fame in 2014 is a rather unusual figure – an owl-headed man in a Victorian tail-suit, a Slenderman-type stalker usually found lurking in woods and dark corridors. For their latest prank, the filmmakers unleashed the Owlman on visitors to an abandoned hospital in their native Scotland. They returned to the site dozens of times over the course of six months, laying in wait to capture the best reactions with their hidden cameras. The result is a hilarious five minute video, with some deeply traumatized-looking victims, but the producers assure us that everyone featured in the video has recovered well from the experience.

The Black Gloves tells the story of a psychologist obsessed with the disappearance of his young patient, and the menacing owl-headed figure that plagued her nightmares. His investigations lead him to a reclusive ballerina who, just like his patient, is convinced that she is about to die at the hands of this disturbing entity.

The film is a co-production between Hex Media and long-time partners Dark Dunes Productions, in association with 3rd Monkey Productions and Lights Out Productions, and is set for release in Autumn 2017.

So what are these scare-pranks? Well, I am glad you asked. Here are both the old one (in case you missed it) along with Owlman’s newest hijinks for your amusement. Check them out and be on the lookout for The Black Gloves!