After only getting to see a few movies at Shriekfest due to the Halloween craziness, I got a chance to screen some of the other movies played there. The... 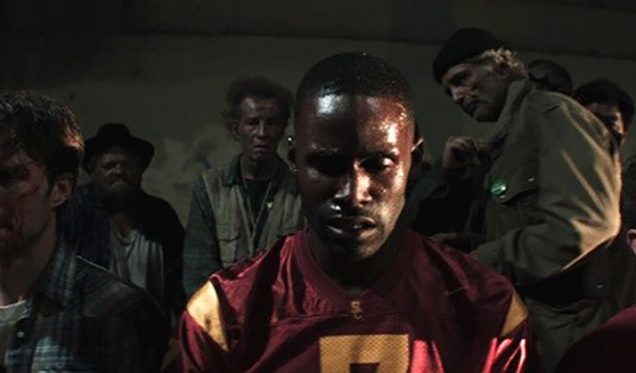 After only getting to see a few movies at Shriekfest due to the Halloween craziness, I got a chance to screen some of the other movies played there. The film for today is Parasites. The movie is written by, produced and directed by Chad Ferrin. Now I must admit going in without a synopsis to start with, and knowing it was entered in a horror film festival, I began watching with the assumption that giant parasitic creatures would be eating flesh or something equally as gross. But wow, I was so far off the mark! Instead the movie reminded me a lot of Escape from New York in many ways.

Parasites turned out to be a survival thriller, on the streets of LA’s Skid Row area. But that being said, it wasn’t just a monster after someone, there was some serious social commentary going on within this interesting movie. The official plot description on IMDb is simple: “Three friends find themselves lost on Skid Row and are captured by an angry homeless gang”.  Not a good plan for a group of college boys, in a super nice car, to get lost in a bad neighborhood, after being rude to a homeless guy. Can we say, Bad Karma? The idea that any of them would get cocky enough to set the scene for such horrific and brutal results makes me wonder what part of this is the “inspired by a true story”. I’ve seen guys in bars act like these college guys did, so I’m not surprised things went wrong for them. Testosterone makes guys do stupid things, but usually so many people don’t end up dead over it.

The boys could have run into anyone that night, but they ran into a gang of homeless people that had a ruthless leader named Wilco, (Robert Miano) who was out for blood. Now none of them are too bright, or in great shape, so at first, it looks like things may be bad, but not catastrophic. In a short time, we find that is not the case. Things go from bad, to WTF super bad, quick. Soon we have only one college boy, Marshal, (Sean Samuels) alive, and he is running away naked with no way to defend himself, the gang close behind. 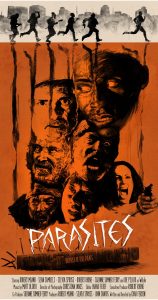 Now, the only thing that bothered me right there was, our guy kept mentioning that he was a football player for USC, so right off the bat, shouldn’t he be able to run away from a bunch of dirty, drunk derelicts? OK, he is injured, confused, but he is in way better shape than any of them. I had to let that go to continue watching. So, we see him running and running. Running into people that won’t help him, and people, that when they do help him, things go wrong for them. We also see how the tables have turned. Earlier in the night he and his friends were making fun of the homeless people, that now, others perceive him to be. Now he gets to walk in a homeless person’s shoes, literally, and it’s not a good experience. A learning moment maybe?

So, who are the real bad guys? The assholes the college boys were being in the beginning of the movie, or the homeless people that seemed like they were just killing for fun? There are other bad situations on the street revealed too. A decorated Vietnam vet ending up homeless and a confused man with Downs Syndrome, dumped to fend for himself on the street, are both sad realities in this world. We see the others we expect too, drug dealers, pimps, and prostitutes. The movie does go to some awkward, uncomfortable places and makes you wonder about people. They are very relevant thoughts, in this difficult time our world is going through. I hate how badly people treat people and I know that’s why I love dogs so much!

For me the movie was very raw and powerful, even though I thought it could have been much shorter and still have worked. A little too much, running, and running and running, but still a great movie overall. There were some awesome characters and good acting, but the standout actor was for me Robert Miano. His crazed, violent performance was terrific. I was very tense any time he was on the screen, wondering what would happen next. There was a lot of great blood and gore, (the horror fiend inside me was happy) and the practical effects were really well done.

I loved the photography. The City of Angels at night, shows us it’s worst and it’s best. The lighting, or should I say, the use of the existing lighting in the outdoor scenes was beautiful. The riverbed and streets looked cool, yet ominous at night. Every corner our ill-fated Marshal turned, I was filled with dread, the streets just looked scary! The music was fabulous. It really helped to set the mood.

I will not reveal much, I hardly ever do in reviews, but I wish that our running guy could have gotten the revenge that I felt he needed, for his friends. But instead, the ending was very unfair and oddly enough, reminded me a lot of the original Night of the Living Dead. I have to add one thing that I thought was interesting. On IMDb it says that one night the cast and crew were really chased by a mob of homeless people. Just thought that was great and needed to share. I’m glad that incident didn’t mirror the movie all the way!

So, to sum up: “Parasites is a raw, powerful movie with a strong socially relevant commentary.” If you get a chance to see it, I recommend that you do. More info on where it will be playing next can be found on their Facebook Page