Ewan Johnstone gives an inside account of the party of the year! 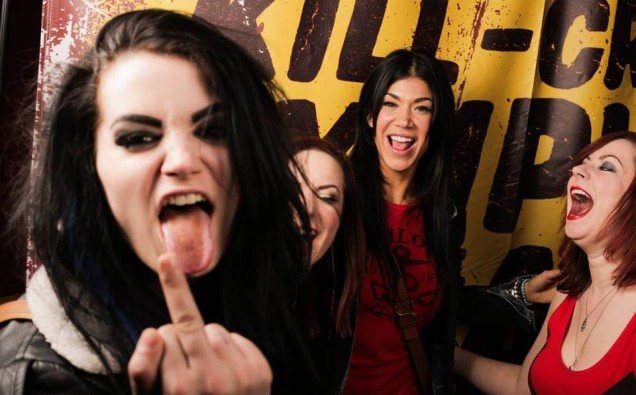 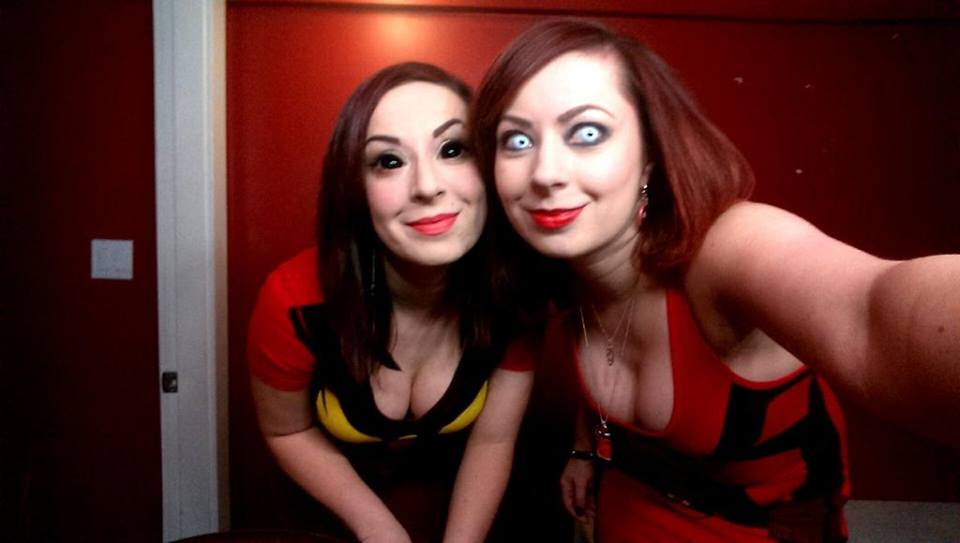 Twisted Twins prepping for the show

A huge “Thank You” goes to Blood Shed friend Ewan Johnstone for giving us the low-down on last week’s Twisted Twins Kill-Crazy Kickstarter Burlesque Party at the Rio Theater in Vancouver. His detailed, almost voyeuristic recap will make you feel like you we there yourself! Enjoy! 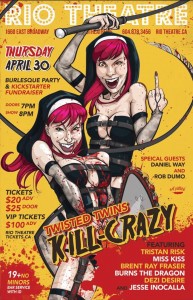 On the night of Thursday April 30th, in Vancouver BC, one day after Jen and Sylvia Soska shared a Birthday (along with their Mother) they held an interesting and potentially scarring event known as the Twisted Twins Kill-Crazy Kickstarter Burlesque Party, to help continue and celebrate the fundraising campaign for their upcoming graphic Novel collaboration. This event was a chance for their friends, family, associates and FANS to celebrate with them with a party and a show and as both a fan (and friend in the making) I can say we were all in for a treat, from the show’s start to end, and the party that followed. 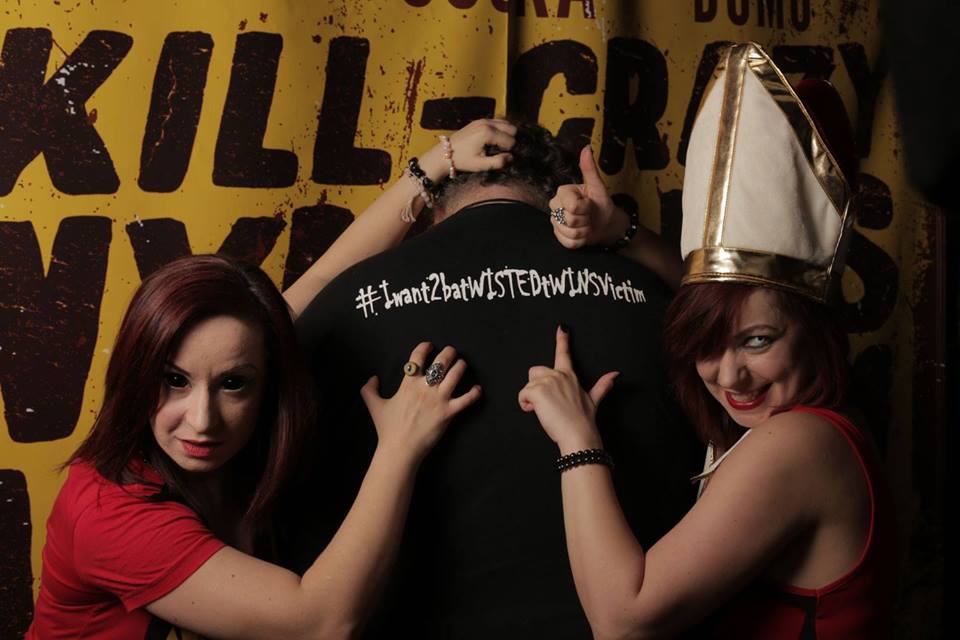 Author of this article, Ewan Johnstone, with Twisted Twins

The Rio Theatre of Vancouver is known for live shows and the Soska Sisters gave the audience a show to be remembered. I arrived by taxi, after having picked up a VIP ticket a few weeks earlier. When I first arrived to find Jen Soska (done up like Dark Phoenix of X-Men fame) outside with a few others (including the Track Suit Pope) having a talk, she ran up to give me a hug. She would get two surprises from me: A piece of artwork that I’d been carrying for an artist (Kyle Burles of Kyohazard Studios) to give the twins, as well as a leather rose from Leatherdesign Studios as a belated Birthday gift. Other roses presented to Sylvia and one for their mother as well. Since I was wearing one of the original Demon Twins of Berlin design T-Shirts (inspired by their characters from American Mary) with a Hashtag on the Back of #Iwant2bAtWISTEDtWINsVictim, we all had a good laugh!

I got my ticket scanned as was sent to Sylvia Soska (done up Deadpool style) to get my VIP lanyard and meet a couple of the folks from Luchagore Productions. Chuckles and amazement came from Sylvia when I produced three of their DVDs to be signed. They pulled in Tristan Risk from ABCs of Death 2 and Kaj-Erik Erickson from See No Evil 2 as well, though it took a few minutes to lock down sharpies for signing. I saw another member of the #TwistedTwinsArmy (Hashtag on his back) in the new Hail Soska design shirt. Yes, the fans were out in force but we were mingling with the performers and other members of the Horror & Film Industries.   But before the night was over, a few more surprise guests showed up in the audience. 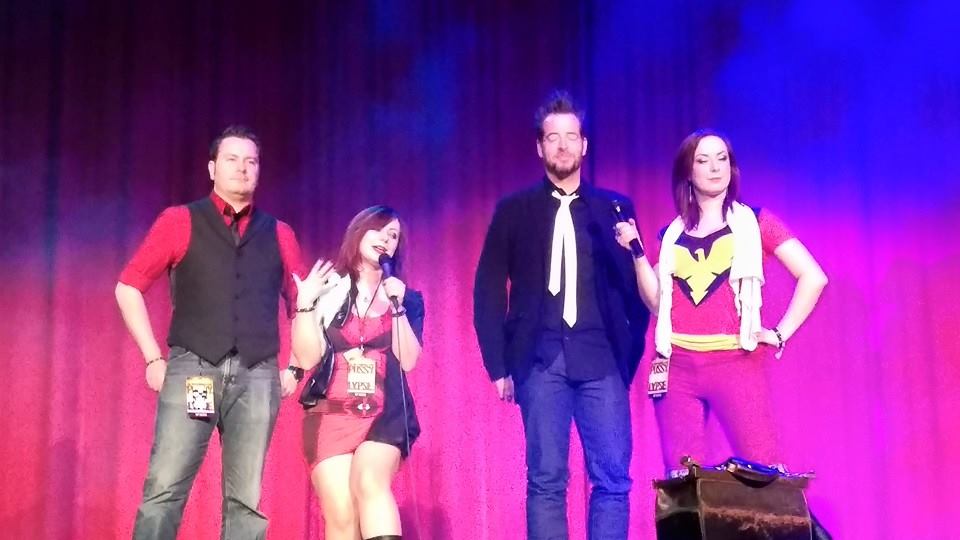 The show opened with the ladies taking the stage; there was some good lighthearted banter as only siblings can really do (like, what it would have been like if Sylvia had eaten Jen in the womb—you know lighthearted stuff). The show kicked off officially they stated triumphantly: “I’m Jen Soska.” “And I’m Sylvia Soska.” Together: “And we’re the Twisted Twins!”. Next, we saw a video “Skype” call between the ladies and Daniel K. Way that would give any not “in the know” the background on the project. This would then lead to the introduction of the performers and some of the acts we’d be experiencing and/or participating in. Attendees could also go and get a piece of limited edition artwork with their own likeness added (as either a “victim” or an extra killer, depending on your sex) drawn by artist Rob Dumo and signed by the whole Team (Helper Deadpools not included).

The stage was taken over with several performances, including a gender swapped Green Goblin and Jim Carey inspired Riddler burlesque dances performed and cosplayed by Dezi Desire. Miss Kiss (as Harley Quinn) sang her heart out and escaped a strait jacket!

After the intermission, Burns the Dragon came out as Ghost Rider and performed flaming contact juggling. We knew something big was coming, having been informed we needed bills for a “Special Act”. Burns came out 2 more times, once to breathe fire (as he is a Dragon), and then… the event we needed bills for. I admit I was out of my seat right away when offered a chance to attach bills to his body with a staple gun! This, oddly, got a squeamish reaction from the Twisted Twins. I put 2 bills right on his forehead! Others stapled bills to his chest, arms and his butt (of course no one went for a crotch shot). 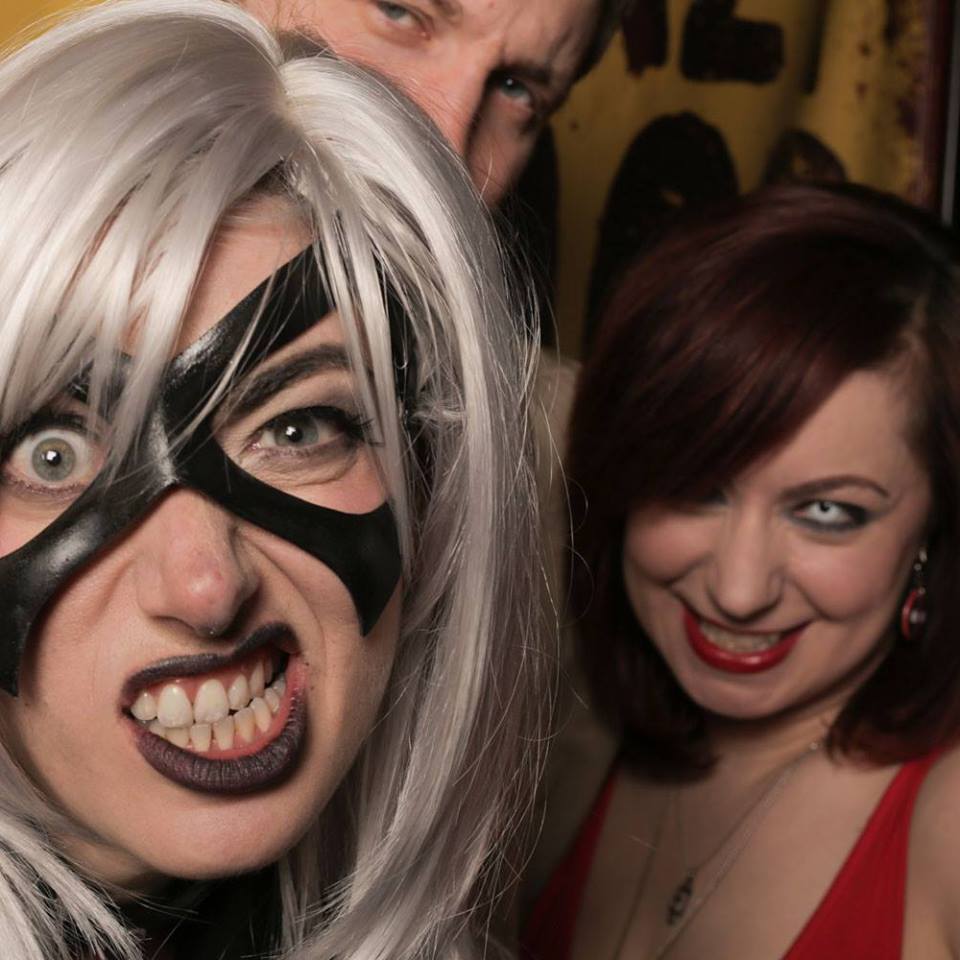 Next, we had an interesting talk by Jessie Inocalla showcasing his inner Tony Stark and talking about the Billionaires of Marvel and DC, comparing himself to Bruce Wayne… until he’s escorted off stage by Pepper Potts. It was around this time we noticed two special audience members: WWE Divas Paige and Rosa Mendes! I mention this because Paige “won” a lap-dance from Wolverine himself Brent Ray Fraser. The show would conclude with a Tristan Risk cosplay striptease of Black Cat. The party continue with the owner of the Rio, Corinne Lea, joining the fun by encouraging everyone to keep on partying! Everyone had an amazing time!

As I left for the night I saw Jen and Sylvia wave to me from across the street as they climbed into a cab (as they had a 10 am Skype Casting call in LA to deal with). The Party never ends for the Soskas!

Ewan Johnstone is an Event Planner/Coordinator/Pyro Technician from Vancouver who has known the Twins for 3 years. 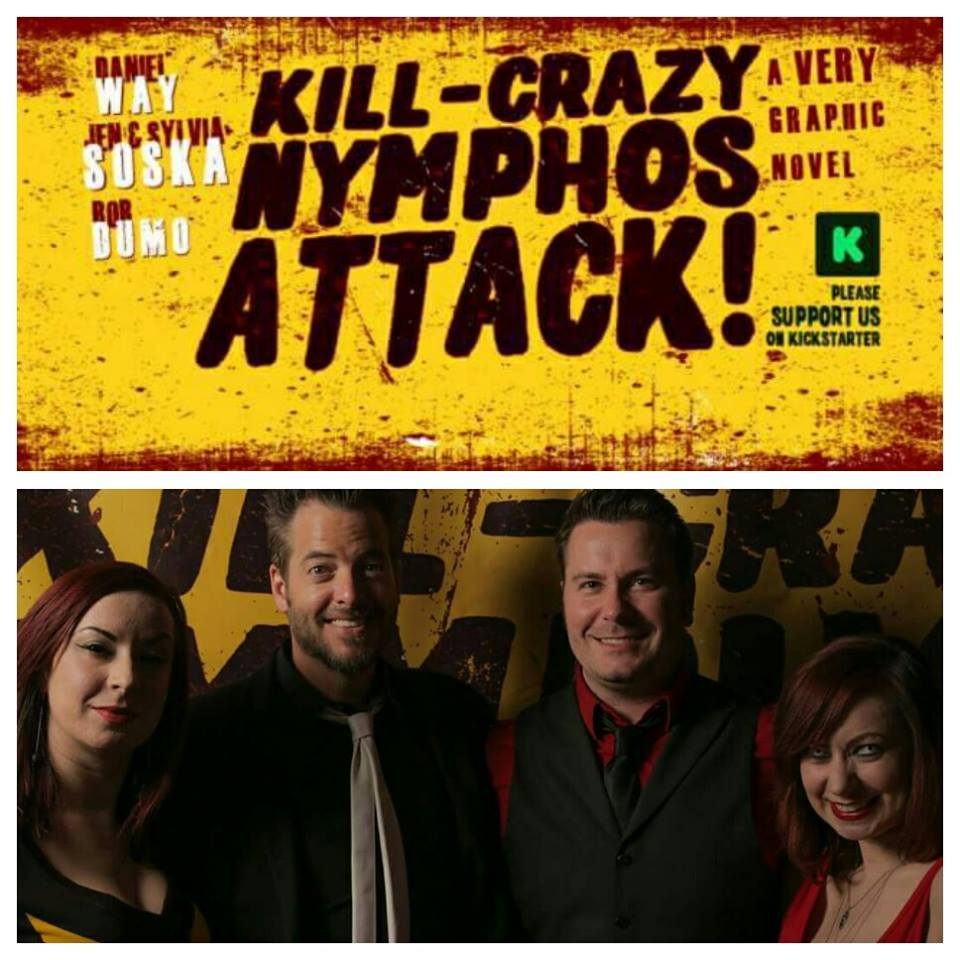 What do you think of Ewan’s recap of the Twisted Twins Kill-Crazy Kickstarter Burlesque Party? Were you there? Sound off in the Comments section!