Penny Dreadful: A Heartfelt Tale Of The Macabre

"Who knows what evil lurks in the hearts of men?" 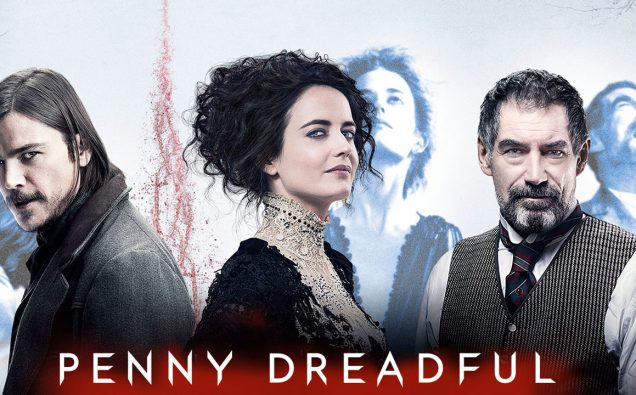 Those who knows this quote, know I took it from the tales of The Shadow, however, it applies it to this review of Penny Dreadful because it is an apt description of the trials and tribulations that we see through out the stories it tells. I choose this quote because it equally applies to thin Penny Dreadful. With Netflix recently releasing the Showtime original series, Penny Dreadful. I think it is the perfect time to spread the word and give an honest opinion on this series now that it is available to a wider audience. As I finish each one, I will be doing a review on the seasons, individually, with only three seasons I hopefully will get through these rather speedily.

Imagine yourself, walking down the cobblestone streets of London, in 1891, at the turn of the century. Where the machinations of the Industrial revolution were in violent collision with the agrarian lifestyle that had come before it. A time where old superstitions fight against the new world order, where magic, vampires and demons roam free. This is the world of Penny Dreadful. A world bathed in the macabre and gloom, where monsters and all things dark live and breathe.

Penny Dreadful is dripping in blood and history, just not the textbook history we are all used to. We feel and sense the ages along with the memories residing in the walls and cobblestones. From the dark corners of Jack the ripper to the tale of Victor Frankenstien we find our tales of old. Repackaged and given to us as a new take on these tales of tragedy and devilry.

Penny Dreadful’s first season focuses on the plight of Sir Malcolm Murray as he desperately tries to search for his daughter, Mina Harker. With the help of Vanessa Ives, played expertly by Eva Green, who helps track down a local entertainer named Ethan Chandler (Josh Hartnett).. While this starts out as a simple story of a Father looking for his daughter. The story, however, does not end there. Sex love and demons become mainstays of the series giving us thrilling experience. Imagine if this is the tip of the iceberg, the tip of the adventure. In my case, it prepared me for an excellent and exciting time ahead that I was all too willing to dive head first into.

The first season is a fantastic exploration of the dark twisted region of not only 19th century London but the dark twisted romantic gothic literature we all love to read. This series completely takes those tales and contorts them into recognizable yet familiar characters that we all know and love. Taking the monsters of yesteryear and breathing new life into them.

We follow the exploits of Victor Frankenstien and his search for the power over death. This becomes only a tiny fraction of the tale that Penny Dreadful weaves. Within the tale of Sir Malcolm trying to reclaim his daughter’s soul, there is a deeper tale of the end of the world arising out from the ashes of an ancient spirit. It is only briefly mentioned but I have a feeling it will play a huge role in the coming seasons.

While watching this first season we become invested in the characters and all their flaws. Malcolm is a complete narcissist, Vanessa faces an age old demon trying to take her away from the light. In Ethan’s case, he is fighting his own inner demons that he has endured from the endless fighting and slaughter he experienced in the Western territories of the United States. All while coming together to fight against the forces of evil.

One of the best things that the first season has to offer is these poor twisted souls that are locked in a battle against evil, who are just as dark and twisted as the villains they face. Their demons begin to push through the cracks and floorboards of their world as they begin to torment our characters. One of the standouts, my personal favorite is Sir Malcolm. Timothy Dalton, who plays Malcolm, is an expert at his craft and gives Malcolm Murray so much depth into a black and murky ocean. Every single person is incredible and functioning at the top of their game in this series. It is beyond a pleasure to watch everyone working with one another and how their interactions create new tensions and strife.

The first season is truly a powerhouse, a force to be recon with. It is a dark, macabre, tale full of terrors. It reintroduces us to some of the classic renaissance era creatures such as Frankenstien and Dorian Grey. All the while exploring the darkness of London at the turn of the century with a twist of the supernatural. I highly recommend it to anyone that enjoys the dark and gothic tales. This first season is a fantastic introduction into the world of Penny Dreadful. Witness and behold what this world has to offer below.