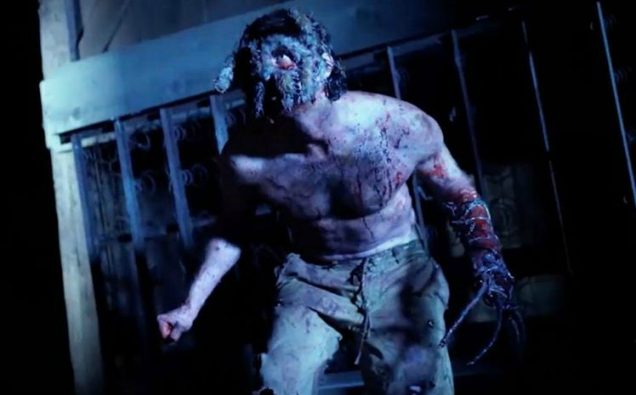 Pitchfork is a new inder slasher film that is making some serious waves and winning tons of awards. If you haven’t seen it yet, fix that. One of the high points of the film is the performance of Daniel Wilkinson, the titular Pitchfork. Honestly, it is one of the best pieces of silent body acting I’ve seen in a long time. I caught up with Dan and got to interview him to find out some of what went into the role. Check it out!

Johnny Macabre: Thank you, Dan, for taking the time for this interview! You play the titular villain in the new slasher film Pitchfork and, in my opinion, you were the highest point of the film. How did you get involved with this production?

Daniel Wilkinson: Thank you, John, very kind of you to say. I had gotten involved through a friend Nicole Dambro, who plays ‘Flo’ in ‘Pitchfork’. Nicole and I were attending the same acting class at that time and Glenn had reached out to her asking if she knew anyone who could play the role of Pa as he was having trouble finding it. I was way too young but she put me in touch with him anyway. Glenn saw my reel, put me through the ropes to get the part, and the rest is history

JM: Very cool. It’s a very physical role with lots of body language making up for lack of dialogue and you definitely seemed very in the moment. What was your process? Do you have any formal acting training?

DW: Yeah, I definitely checked out a lot while filming. Yes, I have had formal training. In New York, my main influences out there were Susan Batson and Penny Templeton. I continue to work on my craft out here in LA. I was at Max Decker acting studio when I got the role of ‘Pitchfork.’ My process, well the end result for this role was living it. But the beginning always starts with the script. Breaking it down doing the research, and putting in the time. Glenn had asked for me to live the character the whole time I was onset which is right up my alley. Talked to Glenn a lot about his vision and bouncing ideas back and forth helped immensely not just for understanding where I was going with Pitchfork but onset as well. We had a really good line of communication. Then adding the layers I had studied a very specific animal for this role, as well as a lot of feral child cases and kids you have been held in captivity there whole lives. Studying with Susan in New York really helped me in the process of creating this character.

JM: Yes, the role seemed very animalistic. You pulled that off very well. I also noticed you went so far as to introduce a distinctive tic with that chewing motion. It actually reminded me of Heath Ledger’s lip licking as the Joker.

So, what would you say your favorite scene as Pitchfork was?

DW: Yeah, the great thing about creating and living a character is those nuances. You really don’t notice your doing them till you see it on the big screen or someone like you points it out. There was one scene where the chewing was specific but that was it. I’m not usually conscious of “I’m gonna do this here” unless it’s a blocking que from the director. “You just be.” … that and knowing what you want and where you’re coming from.

My favorite scene as ‘ Pitchfork’ was the scene at the bloodshed where I brought the bodies as I really got to ‘Play’ as Pitchfork, uninhibited or observed.

JM: Awesome. The most distinctive thing about the character was the pitchfork itself. What was it like getting around with that prosthetic? Was is distracting or impeding in any way?

DW: Everyone came together to make that hand as amazing as possible. Makeup department. The producer Darryl, Glenn, Chad man of many hats and talents. Even Rey the DP. I wanted you not to be able to tell there was a hand there and to be as small as possible so I definitely had atrophy of the hand after every shoot day. You’ll see it in the behind the scenes “the making of pitchfork.” As far as it impeding., it fit for what Pitchfork had just been through so I think it only helped with the performance.

The film ended leaving a definite opening for a sequel. Do you know if there are plans for one and would you be up for it?

DW: Thanks man! Yeah, for sure I would like to do more. This was in talks as soon as I had started. Glenn’s vision was to make this a franchise character. This is first of three planned films. Hopefully with the support of the fans and everyone will be able to make the other two.

JM: Fantastic! I hope they come to fruition because this is definitely a film I would like to see more of.

Thanks again for taking the time for the interview. Before I let you go, is there anything else you would like to tell the readers?

DW: Yeah, the great and fun thing about Pitchfork is where he’s going.

Yeah, you guys rock. Thanks for all your support. This really has been an amazing passion project to be apart of. It’s so great to see Glenn and Darryl make their childhood dreams come alive. In the words of Glenn “Follow your dreams.”
SHARE THIS ARTICLE
No Comment