I had the pleasure of attending the Portland Horror Film Festival on June 5th-8th, 2019. This is their 4th year and what a great line up! The diverse list of independent and international horror films gave attendees lots of horrors to absorb. Special guest Mick Garris screened his new film Nightmare Cinema on Friday and hung out all four days to meet and talk about everything horror. The weather in Portland, Oregon, at the famous Hollywood Theater, also matched the horror mood, with storms and thunder some days, and bright sun on others. 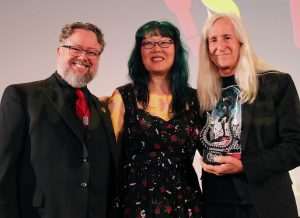 I’d like to thank Gwen and Brian Callahan, the wonderful hosts of the event. Not only are they amazing folks to talk to, but they also put together a film fest that can only grow and get better each year. The Portland Horror Film Festival was launched in 2016 by Gwen and Brian, who are also directors of the popular H. P. Lovecraft Film Festival that happens each October at the same location. With the goal of promoting and nurturing independent horror film, the Portland Horror Film Festival is the first dedicated all-genre horror film festival in Portland, OR. The film programming is comprised of international, independent short and feature-length horror films, many of which you can’t see anywhere else.

Besides being enjoyed by Portland’s distinguished horror fans, and being eligible for several Festival Awards, selected films were also reviewed by an industry insider for the Bloody Judge Award. This year’s judge was actor, producer, and makeup effects artist Heather Langenkamp. (A Nightmare on Elm Street, Cabin in the Woods)

So here is a quick recap of each day, including what I liked the best! Every film was there because it was personally chosen. Every film was a winner, no matter whether they received an award or not. There were so many scary and funny horror shorts, features and even some great bumpers! I will have a list of all the winners at the end! 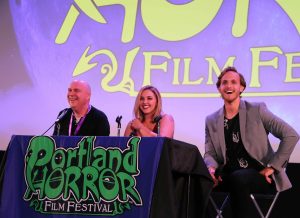 Day 1 started with the World Premiere of  Stay Out Stay Alive. (click here for my review) Writer/director Dean Yurke’s debut feature film about madness and greed was terrific and my favorite film of the night. Following the Q&A with Dean and actors from the film, we went straight into the first group of horror shorts. Bad Resolution, @SelfieJunkie, The Monster, Creaker, barren, and The Hidebehind were all great. It was tough to decide, but I really enjoyed The Monster from director Neil Stevens the best, followed closely by @SelfieJunkie from director Ty Huffer!

After a Q&A with a few of the short film directors and a quick break, we resumed with short film Tick and then the feature film Satanic Panic. This ultra-campy comedy was many people’s favorite, but it fell flat for me. I loved the gory special effects from Tate Steinsiek, but the story was just too silly. 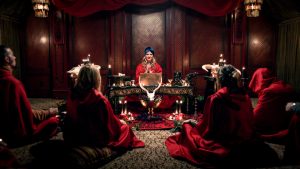 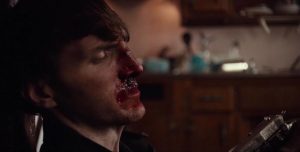 After the Q&A with the short film directors, we moved on to my favorite film of the entire festival. Depraved, the amazing modern Frankenstein adaptation from indie rock star Larry Fessenden, was incredible. (click here for my review) Look for it in theaters in September 2019!

After that, we saw two more shorts – Coda Sacra and Dead Teenager Séance. Both were very good, but it was hard to concentrate after seeing Depraved!

After the Q & A with short film directors and a break, we watched another great short- Here There Be Monsters– which was another one of my favorites, it was super scary! This was followed by the feature film Reborn. The second film at the festival with horror icon Barbara Crampton in it (The other was Stay Out Stay Alive) was a compelling story, with a standout performance from Kayleigh Gilbert as a young girl brought back to life when she was a baby by a morgue attendant, who then kidnaps her. The film was electric, to say the least! 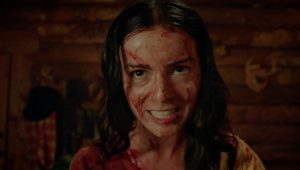 The feature film that evening was really exciting! Produced by writer/producer/director Mick Garris, Nightmare Cinema was a fantastic and twisted horror anthology featuring 5 different stories of horror with 5 different directors, (one being Mick) playing at an abandoned movie theater. The projectionist, a very creepy Mickey Rourke, preys upon the souls of anyone who watches the film. 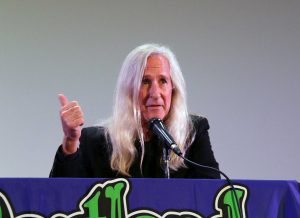 One of the highlights of the fest was Mick Garris and we got to be a part of a live interview with him via The Scariest Things Podcast/TV Terrors. Mick Garris has one of the most impressive writing and directing careers in horror history. He wrote for shows like Amazing Stories, created The Masters of Horror series and wrote or directed more Stephen King adaptations than any other filmmaker. I also found out he was a zombie in the Michael Jackson Thriller video. How cool is that? The film fest also gifted Mick with the Lifetime Achievement award! 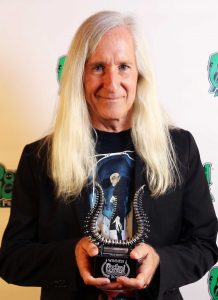 The final feature film was a World Premiere from China entitled The Funeral. The Funeral was a lovely film, very slow burn and boasted some terrific acting. A little hard to follow, the film still was still a fantastic ending to the festival, especially the Q&A afterward with star Kunjue Li, who opened our eyes to the difficulty of making a film in China.

These are the recipients to the awards at the 2019 Portland Horror Film Festival. 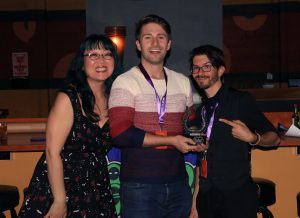 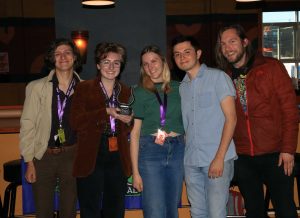 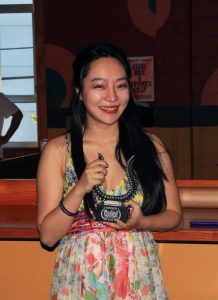 The 2019 H.P Lovecraft Film Festival and CthulhuCon will be Friday, Oct. 4th – Sunday, Oct. 6th, 2019 at the Hollywood Theater in Portland Oregon.