78 Horror Shorts!! So hard to pick my favorites!! 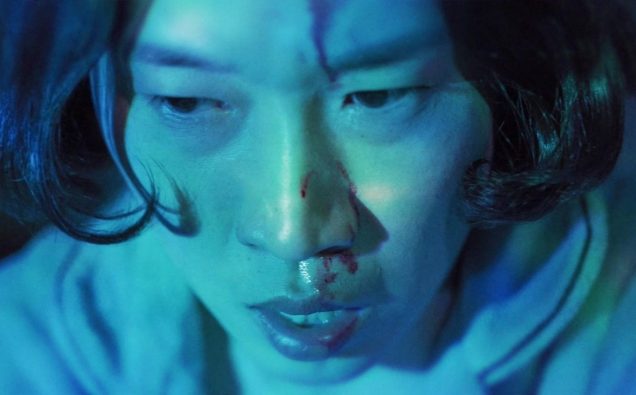 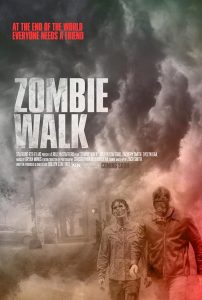 Experiencing the Portland Horror Film Festival remotely is not the same as being there in person, but it was still amazing to have a block of summer horror fun delivered straight to my computer! This year there was such a huge diversity of filmmakers, and that made it very special indeed. I am not able to review everything, it was just so much wonderful and bizarre horror to digest- so I’m going to give you a tiny synopsis of my favorites from each day.  A small bite of horror if you will. Everyone did a terrific job of bringing on the scares, and of course, the gore- but these shorts listed below were the ones that this zombie girl enjoyed the most!

Day 1 – Wednesday, July 28th- Opening Night
The first day of the PHFF was amazing. My favorite shorts Zombie Walk, and I Live Alone were both from the US, but I must admit that my heart went out to the local one from here in the Portland area.

Zombie Walk was made during the pandemic like most of the films in the festival, but some important things local to Portland, Oregon were highlighted in this film about a guy and his pet zombie. We had some terrible fires here in 2020 along with the Black Lives Matter protests. The results of both are seen in the film, with the smoky skies and the graffiti on the boarded-up buildings. I think this film will always be a little part of Portland history from 2020. And well I’m also a zombie fanatic, so how could I not love it?

In I Live Alone, teenager Parker is forced to go live with her creepy Aunt Len while her mom is sick. Aunt Len lives alone for a reason- a very dark and ominous one! In this film, no one is who you think they are. This Lovecraftian-style horror boasts some amazing acting and great special effects! 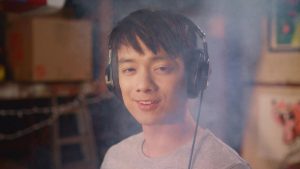 Day 2- Thursday, July 29th
My favorite short from the night was hands down Logan Lee and the Rise of the Purple Dawn from the US.

This over-the-top comedy about love, music, aliens, and some insane weed made me laugh and want to party at the same time! DJ Logan was hoping to get back his girlfriend, but he should have been more careful about what his wheelchair auntie offered him to smoke. This vibrantly neon-colored and drug-fueled film was certainly a bad trip! 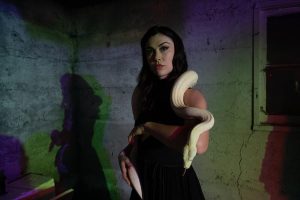 Day 3- Friday, July 30th
My favorite shorts from Friday were from Reptile House from Canada and Family History from the US.

Snakes have always made me a bit nervous and in Reptile House I found one more reason to feel that way. Writer/director Tristan Risk does an amazing job with this film about a guy who gets more than he expects when he goes to buy a snake. Be careful when you think you are going to be the owner of an exotic animal, it might own you!

In Family History a young man brings home his boyfriend to meet his dad. But Sam has a deeper and darker secret than just being gay. This film made me very sad and totally creeped me out. I did not see the end coming and it really got to me. Terrific acting all around!

Day 4- Saturday, July 31st (Shortstravaganza)
Saturday was a full and satisfying cornucopia of horror shorts from all over the world- so to say this was a difficult decision is an understatement. But my two favorites from the day were Principle of Nightmare and Call. 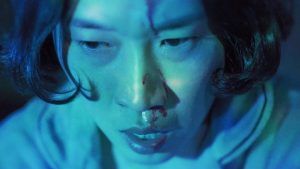 I absolutely loved Principal of Nightmare from South Korea! Watching all the parts of a brain prepare themselves to give a man the perfect nightmare was fascinating! What a cool and unique premise! I think this was one of the most creative films at the festival. Funny and innovative, it is always nice to watch a film that is new and fresh in a genre where sometimes we see the same things done over and over. I must admit, I can’t help but enjoy a film where someone gets their head messed with. The part that made me laugh the most was when the guy wants to write down his dream- but, poof it’s gone! Isn’t that always the way it goes?

In Call, a wonderfully ironic and entertaining film from Germany, we meet a lady who is a little full of herself, and what happens when she goes in a creepy elevator and gets a phone call. I loved the old-timey elevator location (it was like another character) and the manner in which she is manipulated. The end blew me away! 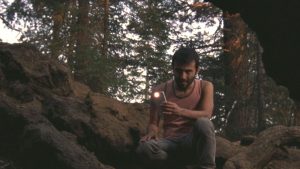 In Wanna Go Camping, what was supposed to be a romantic camping trip turns deadly. Camping has never been my thing, and this film gave me just one more reason to stay out of the woods. Cute in some parts, yet still scary in the end.

I think Hello is my favorite film so far. I have a vintage Airbnb of my own that is supposed to be haunted, but my house is no comparison to this apartment in Los Angeles. I adored the story about an aspiring actress who meets the ghost of the first real Hollywood movie starlet, who died horribly many years before in the same apartment. Hello is terrifying, original, and even a bit funny at the end. I love the old-fashioned touches, the retro place they filmed in, and the very angry ghost. Great job!

Day 6- Monday, August 2- (Monday Night Shorts)
Another night with shorts, shorts, and more shorts! With two full blocks of short films to watch- it was a hard decision, but my favorites in the first block were Miss Blueberry Beauty Pageant and Night of the Jarrawog.

Miss Blueberry Beauty Pageant is a crazy look at beauty pageants and what makes them the weird and kinda evil things they are in the first place. I’ve always thought there was something inherently wrong about pitting women and kids against each other on stage like this, and if you add that the audience is full of vampires, well you get a bloody mess indeed!

In Night of the Jarrawog we meet some rather goofy characters from Australia fighting off an evil and hungry monster called the Jarrawog. Not a real high-budget-looking film, but it made me laugh and was a lot of fun! (P.S.- I loved the crayon drawings of the monster!)

In the next block, I loved Pick Up Artist, Money Cat, and SMAHORROR. All the films in this block seemed like cautionary tales.

Pick Up Artist, from Germany was a super short 3-minute film, but in it, we learn that maybe it’s better to be aware of our surroundings than to wear headphones and only get half the story. To tell you the premise would be a spoiler- but just know that paying attention to his surroundings could have saved a guy’s life!

Money Cat is a tragic story about two girls who find out the hard way that you need to be very careful what you wish for, especially from a Japanese Money Cat Statue. 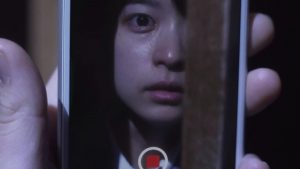 In SMAHORROR from Japan, the cautionary tale is that of sharing everything we do on social media and that people seem to think they can say whatever they want about anyone under the guise of anonymity. Shot to be watched as if on a cell phone, SMAHORROR is a suspenseful and terrifying supernatural story about Japanese students who decide to go into a bathroom and film where a classmate of theirs allegedly committed suicide. Maybe they should have just gone to class.

Day 7- Tuesday, August 3rd
I had three favs in this shorts block. Hurt Luv from Canada, Mytosis from France, and Wich from the US.

I’m not usually a fan of musicals, but Hurt Luv was a terrific music video about what else? Love and how it can hurt! Really fun and entertaining!

In Mytosis a guy accidentally kills his wife and buries her in the garden. This is some crazy garden and what grows after that is something very new and sinister. Be careful if you stop at any roadside veggie stands, you have no idea what they may have used as fertilizer.

Wich was just a 5-minute film, but all I can say is that it made me laugh and decide it was time to clean my fridge! Great concept!

Day 8- Wednesday, August 4th
Wednesday was a great day for shorts, but I picked three favorites. Watcher and Sundown Town from the US and Woodland Cemetery from the Netherlands. 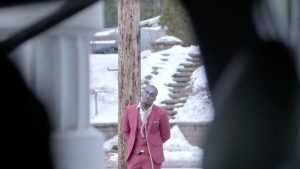 I loved Watcher because it showed that if you are a bad guy wanting to break into a home, it may not be a good idea to underestimate a single woman living alone. Bwahahaha.

Sundown Town is a very disturbing, yet timely story that makes a big statement in just a very few minutes. Police brutality, racism, predudice and revenge are all examined in this hard-to-watch story. Past and present come together in this amazing film. The terrific acting and cinematography make this a must-see if you get a chance!

Woodland Cemetery reminded me of the Lights Out short that went viral a few years back. As a photographer myself, I have photographed people without them knowing, just because they were there and looked cool. In this case, a photographer taking a photo of an old woman putting a lantern on a grave turns out to be a terrible idea. The haunting image is now haunting her.

Day 9 – Thursday, August 5th- (Closing Night). As the festival finished, more terrific films were unearthed to end by. Saving the best for last? Not really- the whole festival was fantastic- but I did enjoy the last few nuggets of horror.

My favorite short film for closing night was The Relic. I have always wondered if archaeologists or basically grave robbers should be messing around collecting things they don’t understand. In The Relic, a group that is searching for a mythological object may have found way more than they thought. Could they have possibly started the beginning of the end of the world? Some things that are legends should just stay that way. I loved this tension-filled and gory film!

That’s all, folks! If you made it this far, have a great rest of the year, and see you next Summer! …UNLESS you join festival directors Gwen and Brian Callahan for the 26th Annual H. P. Lovecraft Film Festival on Oct 1-3!

Coming up in my next article will be my mini-reviews on all the Feature films I saw at the festival!

For more info, you can always go to their website!