“Out there we eat them, in here they eat us.” 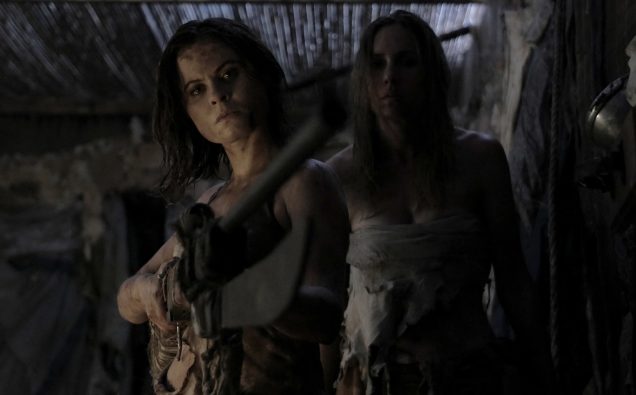 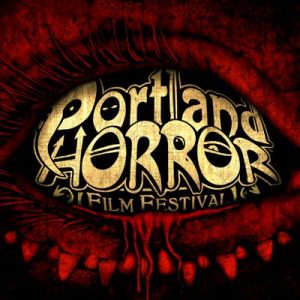 With the COVID-19 pandemic keeping us all away from group events, film festivals have been one of the many casualties. I am so excited to report that I still get the joy of watching new and wonderful indie horror from all over the world, right here in my office at home thanks to the amazing folks at Portland Horror Film Festival.

Portland Horror Film Fest officially runs June 17th to June 21st, but we got an early taste of the horror on June 10th with an amazing shorts block with films from Poland, the U.S., Spain, the U.K., and Iran.

Each night there are short films and then the features. So much horror goodness. I decided I will pick my top three shorts each night to go along with my review of the feature or features for the evening. 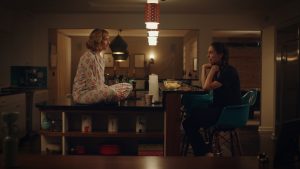 June 17th: All the shorts were super well done; it was a very hard decision. But my three favorites are Waffle from director Carlyn Hudson, Overkill from director Alex Montilla, and The History of Monsters from director Juan Pablo Arias Munoz.

Waffle is a fun look at what it would be like if we were dependent on an App to bring us friends and exposes that the person with the most money unfortunately wins. Overkill is a campy and hilarious take on the trope of the masked killer that literally will not die. I adored all the one-liners! It had a feel like one of my other favorites- Monty Python and the Holy Grail- The Black Knight! The History of Monsters was dark and beautifully shot. I really felt for the woman who was torn between feeling safe from the monsters outside and inside, while battling her own inner needs. 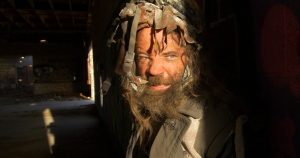 Synopsis: Welcome to a world where man is suddenly no longer at the top of the food chain. A small group of Geocachers – modern-day weekend treasure hunters – go searching in the desert for a bounty left by an eccentric billionaire and instead they end up being hunted. It’s a race for survival and those who don’t make it are sure to be served up for dinner. 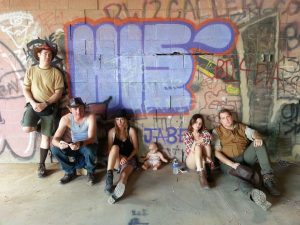 This film interested me; you see, I am a Geocacher. I use a GPS or my phone to lead me to hidden containers so I can sign a log and possibly end up with some little toy to commemorate it: If I have something to trade, of course. I love it because it makes me go to places I’ve never been to, even if that means crawling around in the bushes looking for a camouflaged Altoids container.

According to SFX makeup artist turned writer/producer/actor/director Barney Burman, when a werewolf film he was working on disintegrated, a friend suggested they do a film like Planet of the Apes, but with pigs. The idea stuck with him, and slowly but surely Wild Boar was born. Now, I see a homage to The Hills Have Eyes along with The Texas Chainsaw Massacre, but that’s just me. 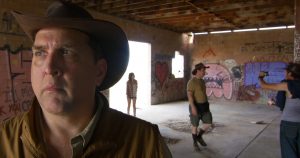 The film starts with a cool animated scene of pigs dressed in costumes, being observed by scientists. When a mushroom cloud appears and takes out everything in sight, we can assume it was a nuclear bomb testing facility. Poor little piggies.

Cut to a young woman named Lamb (Augie Duke) in a wet t-shirt swimming underwater and finding a box with a big red x on it. Bringing up the ammo box that was inside, she and her boyfriend Wolf (Daniel Roebuck) find some meaningless things but had the adventure of finding the geocache. Partying later with friends Sable (Jessica Sonneborn) and Griffin (Michael Reed) they find out a billionaire named Roger Foster (played by Burman himself) has placed a Geocache Challenge and the foursome along with Wolf’s brother Turtle (Jim Nieb) hope to find it and the treasure they hope will be theirs.

Unfortunately for the hapless treasure hunters they are headed for the very site of the nuclear testing and will find out the hard way it is now inhabited by a race of mutant pigmen. The pigs have a civilization much like humans, with family, homes, music, and a sense of community. Oh, and big appetites. 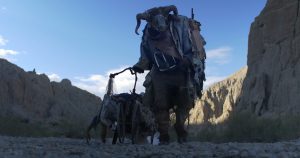 Evolution has created some truly disgusting, bloodthirsty, yet almost endearing mutant pig characters. B2FX Inc did a fantastic job with the creature effects. Since I do makeup myself, I loved all the blood and gore; it was incredibly realistic. My only thought would have been to maybe not see the pigs up close quite so much. As good as they were, sometimes less is scarier. But that being said, every pigman and all of the makeup from Merry Cammack, Heather Grippaldi, and Nick Reisinger was top notch.  Down to the hairs on the pig’s chinny, chin, chins. (OMG, I had to)

Even though the characters were not very deep, I think the entire cast did a fantastic job. The cinematography was incredible and the desert location at the wasted and decaying Salton Sea was perfect. 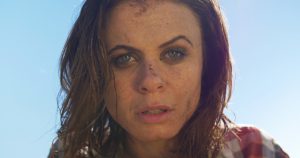 I will not say anything about who ends up dinner first, second, etc… all I can say is that those pigs really know how to take care of their culinary needs, except maybe not much about bathing. I guess they are pigs, right?

But the question I think we are being asked is, who are the real monsters? We did the nuclear testing, we eat pork. As Roger Foster tells them later in the film, while he is being held hostage, “Out there we eat them, in here they eat us.”

I only have one negative, that I feel compelled to mention. The girls both end up in tiny revealing, torn outfits. This seems out of place, unlikely and unnecessary. It was distracting for me because I know no one would be dressed that way out in the desert. Just saying.

Wild Boar is a fun and fantastical sci-fi thriller. Watch it if you get a chance! Barney Burman and his mutant pigs are currently on the film festival circuit.