They destroyed his American dream. Now it's time for a SHO (Kosugi) down! 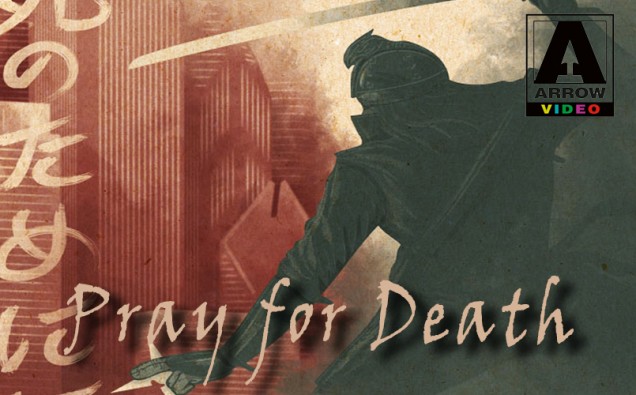 Released on February 16th by Arrow Video was Pray For Death, starring the incomparable martial artist, Sho Kosugi (Enter the Ninja 1981 Revenge of the Ninja 1983).

Sho Kosugi stars as Akira Saito, a former ninja who, after the death of his brother by Akira’s own hands, has since sheathed his sword. Unhappy in his role as an executive at a Japanese food company, Akira confesses his dream of running his own restaurant. His wife, Aiko (Donna K. Benz) encourages his dream and asks that they move to America to make his dream happen. They and their 2 sons, Takeshi and Tomoya (Kane and Shane Kosugi), move to California to start their restaurant. Their dreams are short lived as the property they just bought is also a merchandise drop point for the local crime syndicate that includes dirty cops.

After a rather expensive necklace goes missing, Limehouse Willie (James Booth) and his henchman, start attacking Saito family. Not even the children are safe. When Limehouse goes too far, it is time for Akira to once again take up the blade and seek revenge the only way he knows how…the ninja way!

The 80’s were simply a great era for entertainment: killer rock n roll, more Slasher films than you could shake a stick at, and a multitude of Ninja films, or Ninjasploitation, like the American Ninja (1985-1990) films, Revenge of the Ninja, 9 Deaths of the Ninja (1985), etc. These weren’t of the quality and depth of Akira Kurosawa films, but they were a great excuse to waste a saturday afternoon watching “Million Dollar Movie,”

or something of that ilk, on your local television station.

The hallmarks of any great Ninjasploitation film include a good vengeance plot, violence, stunts, theme songs that explain the plot, and fight choreography that has obvious misses, and Pray for Death is no exception. For instance, when Kosugi is fighting the main thug, Limehouse, who happens to be an older man, at the end of the film, some shots show a completely obvious stuntman replacement. Think of the Mother’s fight scene in I’m Gonna Git You Sucka (1988), or when Turbo falls down all those stairs in Breakin 2: Electric Boogaloo (1984), and you’ll know exactly what I mean. It’s totally funny, but it is still awesome.

Pray for Death is brought to you in a Blu-Ray/DVD comb0 pack that features both the unrated and R-rated versions.

With having not seen this since I was a kid, I had no idea there was an unrated version. Much like the restored footage in My Bloody Valentine (1980) and From Beyond (1986) special edition DVDs, the color is different, and a little grainier, but still highly watchable. The theatrical runtime was 1 hr 32 min, but the unrated version has a runtime of a whopping 1 h 38 min that has all of the restored violence, some of which is actually pretty brutal. The 1080p transfer is flawless as well as the stereo audio. The special features are also pretty ample with a brand new interview with Sho Kosugi, which happens to be just part 1, so look for more Sho Kosugi films from Arrow Video to follow.

Fans of Ninjasploitation films will want to get their hands on Pray For Death ASAP.