C'mon, that would be soooo badass... 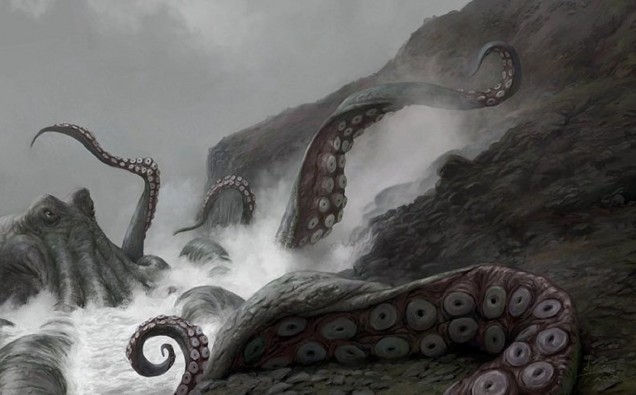 So there I was, swimming through the internet, minding my own business when something interesting caught my attention. From the depths of my Facebook feed arose a story of epic proportions, & it stared back at me as its tendrils of intrigue latched on to my ship of curiosity, pulling it down until I was face-to-face with the beast…so I clicked the link to see what it was all about.

What link am I talking about, you ask? Why, the one that said “Prehistoric Kraken Made Self Portraits”…or something like that. Apparently, there’s a fossil collection of nine ichthyosaurs (or Shonisaurus popularis for you science buffs out there) that was discovered in Berlin-Ichthyosaur State Park in Nevada. It was originally thought that this group of monstrous water reptiles (or marine animals, if you wish) had died from exposure to poison or being stuck in shallow water. Other scientists, however, theorize that a “100-foot-long cephalopod arranged these bones as a self-portrait after drowning the reptiles.” Huh…that’s…that’s quite a leap.

Now when I first read this, I (like most of you, I’m sure) thought this was the coolest damn thing ever. Despite my fear of giant cephalopods (see my review of The Beast for more details), I love the idea of there once being a huge squidopus deep in the ocean, so bored with its life that it decided to make art of itself using the bones of the prey it had slain. It makes you wonder if such a monster could still be out there, given how little we know of our oceans.

But like all good things (pistachio ice cream, running with scissors, LSD, all that stuff), there’s always a level of skepticism. In this case, it’s the fact that there’s not a single piece of evidence to support this theory…son of a bitch. So basically it’s just an idea one guy had (Mark Something-Something of Whatchamacallit University) & decided to share with his fellow colleagues without any way to back it up. I, honestly, hope it turns out to be legit, but chances are we’ll never know for sure…though the chances of a Kraken being the case at all are very slim. Damn.