President Wolfman: Hail to the teeth!

This president's bite is worse than his bark! 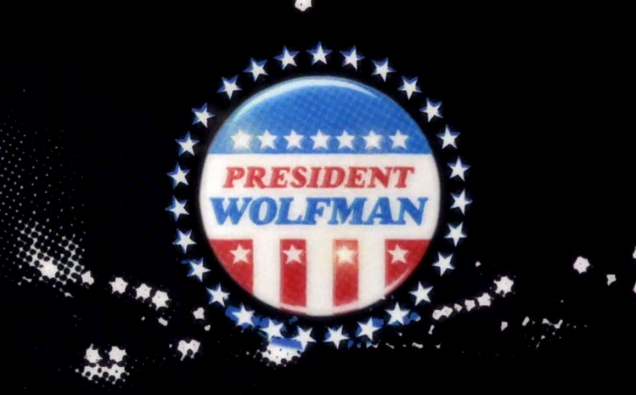 In the current political environment, I can only view a President who changes into a furry monster and eats people as an improvement. And the horror/comedy film President Wolfman gives us a look at just this scenario. A “green film”, President Wolfman is cobbled together from 112 different public domain sources, including instructional videos, PSA’s, and even feature films whose copyrights have expired. Featured heavily are scenes from the public domain film The Werewolf of Washington.

President Wolfman is about John Wolfman, the President of the United States. As a bill looms which would allow China to buy out the United States (forming “Chimerica”), Wolfman takes his son on a hunting trip only to be bitten by a werewolf. Of course, now Wolfman is a wolfman. Will he be able to stop the Chinese takeover and save his son from the evil Vice President all while sprouting fur and fangs and terrorizing DC?

The film is more comedy than horror and that is perfectly OK with me! It’s hilarious, simultaneously dipping into low brow humor at times without ever losing an intelligent quality in its comedic tones. Everything is spliced together very coherently to the point that I shudder to think of how much times was spent digging through public domain archives for the right footage. Everything is then over-dubbed very well with professional quality voice acting. Overall, an amazing effort that really pays off! Wolfman has this writer’s vote!