‘Prisoners of the Ghostland’ Review: Nicolas Cage Stars in a Dystopian Future From Hell

"Time for us all to be free" 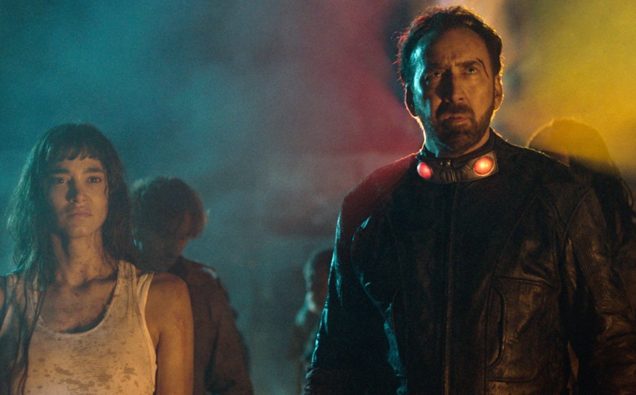 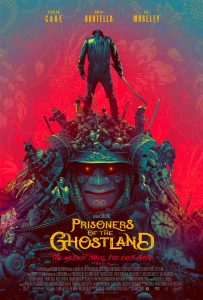 I have honestly never seen another movie from filmmaker Sion Sono, but I have heard of his work. Now that I have seen inside his imaginative and unhinged mind, I’m not sorry I went there, but I am not sure I need ever do it again. There were so many different genres mashed up together that my head was spinning. Westerns, Giallo, Mad Max, and Samurai films were just a few that came to mind in the first few minutes.

I must admit though, my bottom line for seeing Prisoners of the Ghostland was that I could not resist a Nic Cage film. Whether his projects are perfectly wonderful insanity like Mandy, or I have a total WTF reaction where I’m not sure why in hell he would do something so dumb, I still adore him for the crazy weirdo that he is.

Despite being outrageously deranged, Prisoners of the Ghostland blew me away, but I’m not sure that I understood enough of it to declare if that is good or bad. To say I was confused at times is an understatement. Was it a flashback from that time in college I did ‘shrooms, or is it simply very purposefully convoluted? 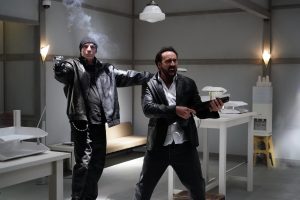 The film begins with parallel stories:  First, we meet two bank robbers (Nicolas Cage and Nick Cassavetes) having a really bad day at work; everything seems to go wrong. One bad guy gets arrested on the spot and one runs away. Then we travel to the neon-saturated Samurai Town, where some imprisoned prostitutes including a beautiful girl named Bernice (Sofia Boutella) sneak out and escape. Unfortunately as we fast forward, Bernice ends up stuck in a dark, weird, dusty, irradiated town called The Ghostland. Despite her cry that she is not a prisoner, it seems that she is once again trapped against her will. Everyone in the film is a prisoner in some way- thus providing an idea of what the theme of the film might be. 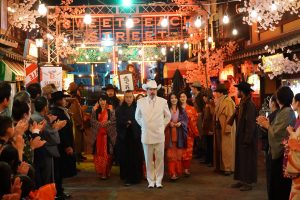 So, what is Prisoners of the Ghostland about? Writers Aaron Hendry and Reza Sixo Safai have conjured up a fascinating, unique, and extraordinary post-apocalyptic land. Geishas, samurais, and cowboys inhabit a colorful Japanese-inspired world. The town is lorded over by a whited suited man known only as the Governor. (Bill Moseley) The Governor has many “nieces” and “granddaughters” in this town, and it seems his favorite, Bernice, has gone missing and he wants her back. Now the Governor has brought in the person that he thinks can bring her home- a man only known as Hero. (Nicolas Cage) 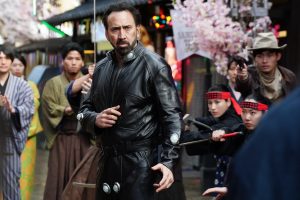 At this point, we know that Hero is a bank robber who went to prison, so I’m not really sure why he is the perfect guy for the job. If he does what our white hat-wearing bad guy wants, Hero will be set free. The Governor has trust issues and to make sure Hero does what he is told, without hurting or in any way spoiling the girl. He puts him in a leather suit complete with small charges in strategic places that will explode if he doesn’t follow the rules. Two on his neck, which would kill him, one on each arm if he manhandles Bernice, and one on each testicle in case he, well you get the idea. The whole thing has a very Escape from New York vibe, which, since I love that film, worked for me. 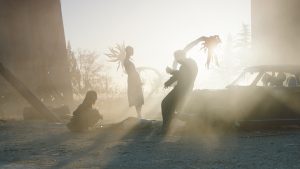 The world outside the gates of the neon-drenched town turns brown and dirty. When Hero drives off in the car he was given, he is confronted by a crew of violent convicts turned radioactive mutants who seem to just appear out of nowhere and block the road ahead causing an accident. This subplot involving Hero’s partner in crime from the bank robbery, Psycho (Nick Cassavetes) who also went to prison, seemed very much a statement about what America did to Japan back in Hiroshima. The SFX makeup was sublime for this storyline because of course, The Ghostland is the strange and disturbing product of a nuclear blast.

Left for dead in the road, Hero is rescued by a weird group called the Rat Family and brought before the leaders of The Ghostland. Remarkably, he finds Bernice there easily. Damaged souls shuffle around aimlessly, and time itself is being forced to stop, (a giant clock has its hands held in place buy workers hanging on it by ropes) because they believe if time goes forward, they will all be destroyed. 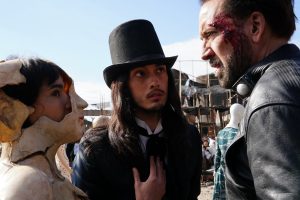 There is a major storyline here, but to give it all to you would be a terrible spoiler and I think it is up to each viewer to come up with their own thoughts on what this film is all about. Is it all a giant metaphor about the dangers of powerful people, control, and what happens when a few individuals fight back? The wastelands are beautiful in a desperate and dark sort of way. Life-like mannequins, cars, and pieces of buildings litter the landscape. 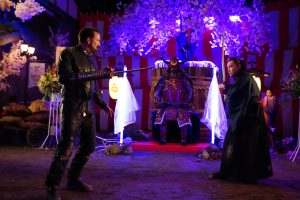 Sono does attempt to give us the underlying mythology, which is performed by a troupe of dancers who in the form of a chant/slide show, translate the storytelling of their Mandarin-speaking female ruler and explain the whole radioactive-waste/convict transport explanation of how  Ghostland came to be.  Why some of it happened is not truly explained, but as I said before it is very entertaining. With all the crazy characters in wild costumes, running around with abandon, it’s honestly very cool. 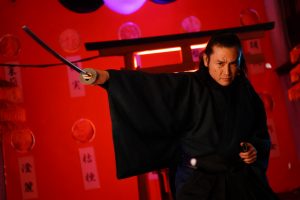 The cinematography, the sets, and the costumes were such a delicious aesthetic so that even as confused as I was, I legitimately had a great time watching this film.  So many wonderful characters gave their all for their roles. If they hadn’t, I don’t think it would have worked. I mean Nic Cage always takes us on a wild ride, performing his ass off in every role he comes across, but so did everyone else involved. I loved Bill Moseley’s self-centered Governor, Bernice when she starts kicking some karate butt, Rat Man, and the Governor’s hitman, a burly samurai named Yasuirjo. (Tak Sakaguchi) This ensemble of fantastically over-the-top characters was absolutely perfect and completely insane.

Is this a film for everyone? Hell no. Sanity has gone out the window for this one. Was it a fun watch that could go into cult status? I believe it could, despite the fact that its lack of logic in places and all the Kill Bill style fighting, could be very divisive for some audiences. From exploding testicles, bodies getting cut to pieces with swords, cowboys, and ninjas battling, to prisoners destroyed with molten nuclear waste, there is something for practically every genre fan out there. 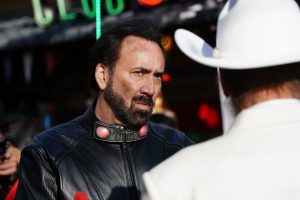 If Hero was looking for redemption for all the wrongdoings he has nightmares about, he got it in spades. He and Bernice become real-life superheroes out to save the world. Who could hate that? Director Sono is quoted saying that while Prisoners of the Ghostland puts a love of pop entertainment on the screen, “What I really wanted to create behind all that is distortions of the modern society making real of the unreal world. I believe we are living in an irrational world.” 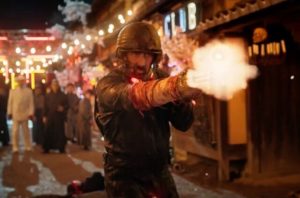 Definitely irrational, absurd, funny, and beautifully filmed, Prisoners of Ghostland is a landmark film that I think will stay around and be remembered. Even without understanding all the symbology thrown at us (I’m admittedly metaphorically challenged sometimes), I understand a reluctant hero named Hero changes the world for good, despite all possibilities. As Cage says in his big speech to The Ghostland inhabitants. “If you’d told me three days ago, I’d be standing here with one arm and one testicle, trying to reason with you bitches, I would have said ‘Impossible’ too!” Remember “Friends, Romans, countrymen…” as the all-time best rally speech? Well, here is the new one! You’re welcome! Afterward, Hero seemed quite empowered, no longer haunted by his past, he seemed to have finally found a meaning for his life.

PRISONERS OF THE GHOSTLAND is available in Select Theaters,
on Demand and Digital on September 17th!