The Ranger: A Bloody Lovesong to Punk Culture

In a buttoned down society bursting at the seams craving for a return to the Reagan era, this film is the answer. 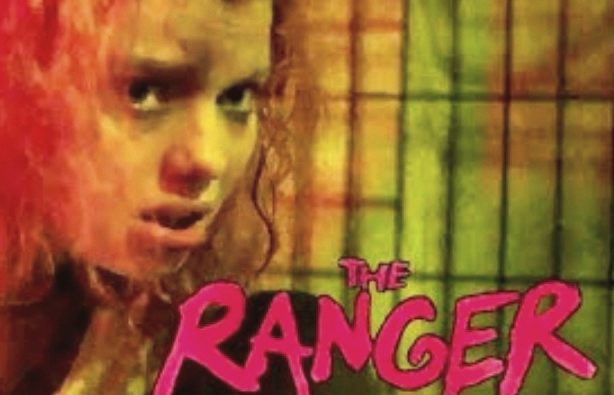 In a buttoned down society bursting at the seams craving for a return to the Reagan era, this film is the answer: A rough and tumble Punk Rock head fuck.

The Ranger is getting massively great reviews, even non-genre specific sources are taking notice. Adding to the feeling of anticipation that many are already experiencing in waiting to see this film. We hope to see it available for mass consumption soon.

“After a run-in with the cops at a punk show goes sideways, Chelsea (Chloe Levine, THE TRANSFIGURATION) and her pals flee the city in search of a place to lay low. Running to the security of Chelsea’s old, abandoned family cabin in the woods, they fall under the watchful eye of an overzealous park ranger (Jeremy Holm, HOUSE OF CARDS) who holds a secret from Chelsea’s past. Set to the beat of a killer punk soundtrack (FANG, The Avengers, The Grim, Rotten UK and more) and presented in eye-popping neon colors, Jenn Wexler’s debut offers a modern take on survivalist horror that both celebrates and subverts the genre’s tropes—with equal parts humor, glitter and gore.” 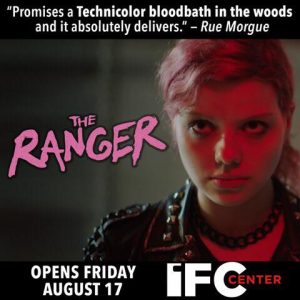 (because this movie is about friendship)

“THE RANGER is the directorial debut from Jenn Wexler, producer of Ana Asensio’s 2017 SXSW Competition Winner MOST BEAUTIFUL ISLAND, Robert Mockler’s LIKE ME (2017), and Mickey Keating’s PSYCHOPATHS (2017) & DARLING (2016). THE RANGER world premiered at SXSW 2018, was in official selection for the innagural What The Fest!?, recently played the Fantasia International Film Festival, and is set to open London’s FrightFest.
The film is co-written by Giaco Furino and Wexler, who also produced along with horror veteran Larry Fessenden, Heather Buckley, Ashleigh Snead, and Andrew van den Houten. THE RANGER is produced by Glass Eye Pix and Hood River Entertainment.”

We hope to see it available for mass consumption soon.

It’s exciting to see a growing sense of love and support within the growing fan base of indie horror. It allows incredible and thought provoking cinema to be created. The Ranger is a prime example of this. If You’re in NY near the IFC Center tonight, take your friends (because this movie is about friendship) and treat yourself to some gore of a particular flavour. 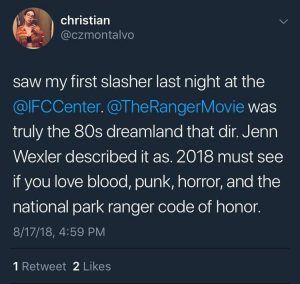