“I won’t scream for you” 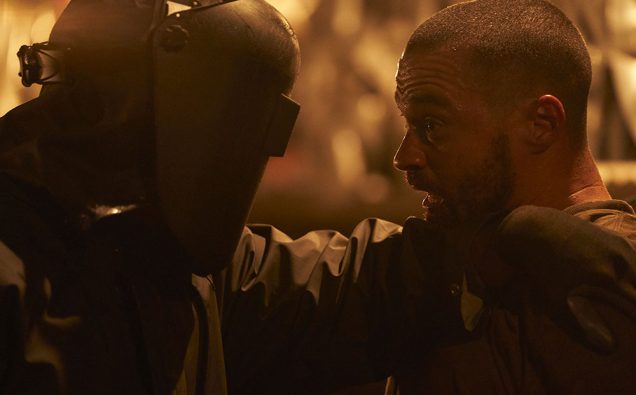 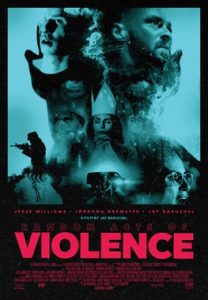 I just got done watching Random Acts of Violence for the second time. I say this because the first time I watched it on Shudder last summer, I had trouble finishing it. I am a horror fan, a huge horror fan. I do gory SFX makeup and have no problem seeing the bloodiest of films. But I stopped watching it mid-way through the first time, and I never went back to finish it until now. So yes, I love gore, but there must be a sensible motivation for it, and I needed to see if Random Acts of Violence delivers that logic. As I write this, I am contemplating how I feel. I will be judge and jury as to whether the violence is as random as the title suggests. The verdict awaits below.

Synopsis: Graphic novelist Todd is struggling to complete his ultra-violent but popular comic book series Slasherman. But on a road trip to find inspiration and publicize his work, a series of brutal murders begin to happen in the style of his famous comic book images. 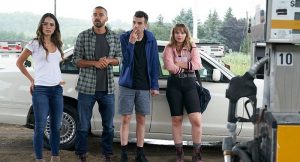 Comic-book author Todd Walkley (Jesse Williams – The Cabin in the Woods, Greys Anatomy) takes a road trip from Toronto to NYC Comic-Con where he will be appearing to announce the final chapter of his extremely violent and popular comic-book series Slasherman. Todd has created a graphic novel that is controversial at best, where the main character is based on a real serial killer from the ’80s, dubbed the I-90 killer.

Joined by his business partner Ezra (Director Jay Baruchel) his wife Kathy (Jordana Brewster) and his personal assistant Aurora (Niamh Wilson) they stop at uber-creepy real-life locations where the I-90 Killer did his thing, so Todd, who has a serious case of writer’s block, can try to get some inspiration for his swan song. 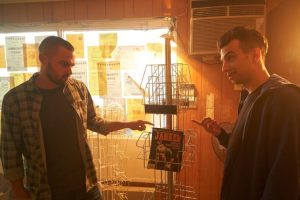 Up till now, writing Slasherman has taken over Todd’s life. He lives with this character 24/7; It has seized his very soul. But soon enough, we see some of his reoccurring dreams and must wonder, are these simply nightmares or memories? His wife is even writing a book about the victims of the never-apprehended murderer, in an obvious attempt to pay respect to the victims and somehow balance out his success on the back of such tragedy. Todd has spent years being idolized by devoted fans on one hand and then criticized on the other, by folks who think it is wrong for him to glorify the inhuman things the killer did. Todd does openly speak of the killer as if he is an artist, who creates his art by inflicting pain to his victims. That doesn’t go over well to most people he meets.

But is Todd writing fiction, or writing about something he knows all too well? 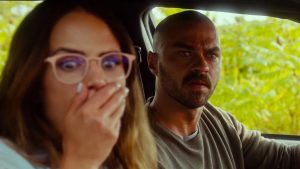 As the trip continues, things start to fall apart. At each of their stops, violence seems to be following them and it looks like the I-90 killer may have come out of hibernation. Todd receives cryptic phone calls right before each new murder. The incomprehensible starts to happen wherever Todd goes. Is all this carnage just for him?

What I like: First off, I love the way the graphic novel animation is intertwined with the story. It was amazingly effective and added a cool aesthetic to the film. The cinematography and beautiful color schemes from Karim Hussain also helps make this an extremely attractive movie. Overall, the acting stands up – not Oscar-worthy, but well done. The gory SFX are friggin’ fantastic, and those of you that know me, know how much I appreciate good horror makeup. The kills are literally fantastic works of art! Kudos to Paul Jones and his team!

While there are a few places where I saw plot holes, and maybe a few too many flashbacks, I really enjoyed the stylish and blood-soaked movie overall. 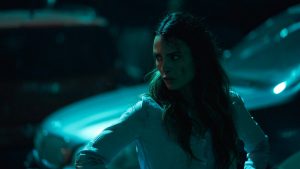 Eventually, Todd will have to face the monster that is the inspiration for his own work. When we see him, wide-eyed and terrified, going down the rabbit hole to face the beast that he carries around in his head, it is hard not to wonder, how much of this is really because of Todd himself. What is the message the killer is trying to deliver? 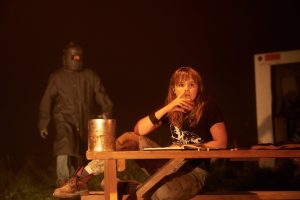 The Verdict: I enjoyed Random Acts of Violence, and the violence is not as random or gratuitous as one might think at the beginning. There is a method to the killer’s madness, and sadly enough the horrendous things he does make sense, to him anyway. In the grim finale, the link between Todd and the killer is finally revealed and Todd will have to wrestle with the idea that he is responsible for the most recent killings.

Favorite moment: In one of the craziest and best scenes in the film, I found it compelling that one of the victims does not give in to the killer easily and tells him “I won’t scream for you” in their final moment.

Random Acts of Violence is not as deep of a film as I think it was meant to be and exploits violence itself. But it is a competent and visceral slasher film, with savage kills, lots of body parts, and should be on the radar of all gore fans.

All photos courtesy of RLJE Films