A disappointing start to the year's horror viewing 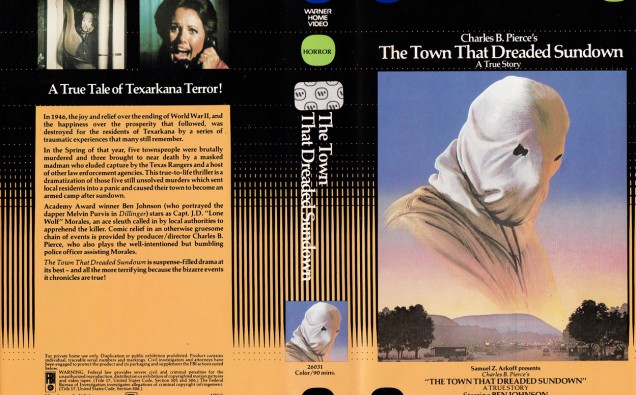 Resolutions: 12 Horror Movies I Will Watch This Year

As you can see, I wasted no time in getting started. Here are my thoughts on my first resolution horror movie.

Directed by: Charles B. Pierce

Not the best starting point I might have had. Should I consider this a fell sign about the movies, and the year, to come? Or should I figure that my resolution viewing has nowhere to go but up? Because I did not much care for The Town that Dreaded Sundown. This seems to be one of those cases of a movie attaining “classic” status simply because it was an early entry in a genre, and not because it was an especially good example. 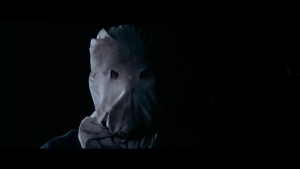 Director Pierce and screenwriter Smith seem to have assumed that basing their film on real events and giving it a pseudo-documentary style meant that there was no requirement to tell a structured story. What we are given is a sequence of events, devoid of either plot or character progression of any kind, mostly filler between only occasionally effective set-piece horror sequences.

Particularly egregious are the comic relief scenes. Their total tonal incongruity might not be so galling were they not in and of themselves so poorly executed. The gags are unstructured and not terribly clever and the comic timing is abysmal.

There is not a single stand-out performance. Actors range from the competent to the unforgivably bad; they are not aided by the clunky, unnatural dialogue and the paucity of character detail.

None of The Phantom’s victims are established prior to the attacks, and, even though some of them survive, none are revisited. We don’t know anything about their lives, their relationships, or their families. They aren’t even given personalities. 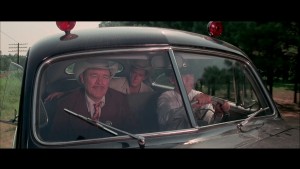 That oversight might be forgivable if we had any investment in the lead characters, the law enforcement officers. We are repeatedly told what an incredible criminal hunting badass Ben Johnson’s Texas Marshall J.D. Morales is, but we never get to see any sign of it. He never seems to have any plan, never takes any meaningful action. At first, Andrew Prine’s good-natured deputy is a little more dynamic and engaging, but once Johnson shows up, Prine is left standing on the sidelines with nothing more to contribute.

Ultimately, most of the movie is a hollow shell built to accommodate the murder set-pieces. These include a few very tense and disturbing moments, and The Phantom himself (Bud Davis) is an unnerving figure – particularly the way that his breath pulses beneath his mask. But even these scenes tend to drag on a little, and the often murky, sloppy cinematography and clunky editing frequently make it difficult to keep track of just what is going on. 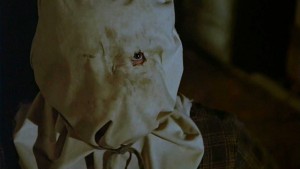 Coming a few years after such effective proto-slashers as A Bay of Blood (1971), Black Christmas and The Texas Chainsaw Massacre (both 1974), and a few years before the genre’s major break-out in Halloween (1978) and Friday the 13th (1980), The Town that Dreaded Sundown is best left as a footnote, the movie that gave us the sack-head killer look which was better used in Friday the 13th part 2 (1981) and the trick of focusing on the killer’s shoes which was more skillfully applied in Scream (1996), and really nothing else of note.

For more strong opinions and people unafraid to express them, keep on reading The Blood Shed, and check out our Facebook page!