‘Revenge’ is a vicious, brutal and satisfyingly feminist film about the guilty getting exactly what they deserve

Raw, stunning and powerful! Jen is one bad-ass bitch! 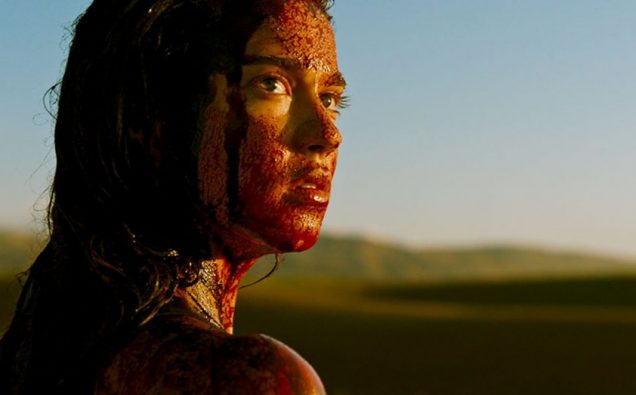 Rarely is a film this gruesome and bloody, also so colorfully stylish and iconic. Watching a woman regain power from cruel misogynistic men, transform like a phoenix, and also include gallons of blood was a cinematic phenomenon. For myself personally, Revenge is one of the best and most extreme indie films of 2018. It has a raw energy and an intensity hardly ever seen in any genre. 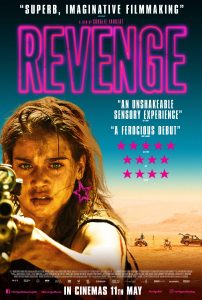 Revenge blew me away in so many ways. When I heard that this exploitation film was one of the subgenres that I personally have the hardest time with, I stepped back and thought maybe I should pass. Rape-revenge films are hard for anyone to watch, but for a survivor of sexual assault- well it’s almost impossible to watch any of these films without bursting into tears or having PTSD reactions for days.

When I found out Revenge was the debut feature film from female writer/director Coralie Fargeat, I felt I needed to see what a woman would do with this kind of story. A story with this much testosterone is usually handled in a way that even a gore lover like me gets sickened emotionally by. But I went, and Revenge surprised me. Our protagonist, Jen is one bad-ass empowered bitch!

What starts out as just another crazy violent party fail for some asshole macho men, turns into a nightmare for those very guys and I cheered like a maniac at the screening! This is one of the bloodiest films I have ever seen that wasn’t a parody, and that’s what made this blood-saturated and extreme film so immensely satisfying. Most films of this genre are slimy, and you feel dirty after viewing them. The change of perspective from a woman filmmaker made this a more intelligent and well thought out film. The hallway scene – drenched in blood- well you just have to see it for yourself!

Synopsis: Jen (Matilda Lutz) is enjoying a romantic getaway with her wealthy boyfriend Richard (Kevin Janssens) until his two sleazy friends, Dimitri and Stan, arrive for an unannounced hunting trip. As tension mounts in the house, the situation abruptly and violently intensifies, culminating in a shocking act that leaves Jen left for dead. Unfortunately for her assailants, she survives and soon begins a relentless quest for bloody revenge.

At the beginning of the film, Jen is shown as a sex object. Just a silly girl in a house full of chauvinistic men.  Jenn is beautiful and sexy. She dances to music and sucks on lollipops. But does that make it an invitation to rape her? Being a sexual being does not mean it is OK to victimize you. You aren’t “asking for it”. It was hard to watch as the men, now done with her and not wanting her to tattle on them, throw her away like just so much trash. But Jen did not die that easily. She gets herself together and the hunters become the hunted.

Honestly, in the real world, Jen could not have survived her wounds. No amount of bandages and peyote could have helped her survive being thrown off a cliff and impaled on a tree. But we in the audience needed her to survive. We needed her to keep getting up, transform, move forward and give back worse than was given to her. She had to avenge what was done. As you will see, she rose to the occasion and vengeance was certainly handed out! 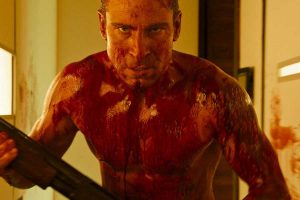 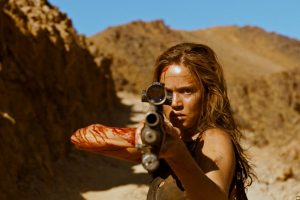 Revenge is a film full of huge gory injuries, some on Jen and many doled out to the men as she sets her traps of vengeance. Absolutely amazing practical SFX work! Just how much blood was used could boggle the mind! The acting is terrific, even if a bit caricature-like. But for anything that wasn’t perfect, there was more than enough strength and style in this film to make up for it. Jen grew, no, morphed into a true feminist hero. It is a film of survival in a harsh environment, an exploitation film and a damn good horror flick.

Jen continues to be objectified throughout the film, which is noticeable with her tiny outfits and blood coated skin. But that is what the term “male gaze” is all about. The idea that Jen is looked at as a sexual object and then she turns that gaze back around and calls out her attackers on it, is brilliant.

This film went through the festival circuit to very mixed reviews. Some walk-outs and many awards later, it is one of the most popular indie films of 2018 on VOD!

Revenge is not a movie that everyone can handle. There are times it is very hard to watch. Please go into it knowing what you are going to experience. It is brutal and bloody. It is also a satisfying, stunning and powerful horror film and one that I think will be remembered for a long time. I know I will!

Revenge is available to view on Shudder and was the most-watched film premiere in their history!