Pennywise The Dancing Clown stops by for some fun. 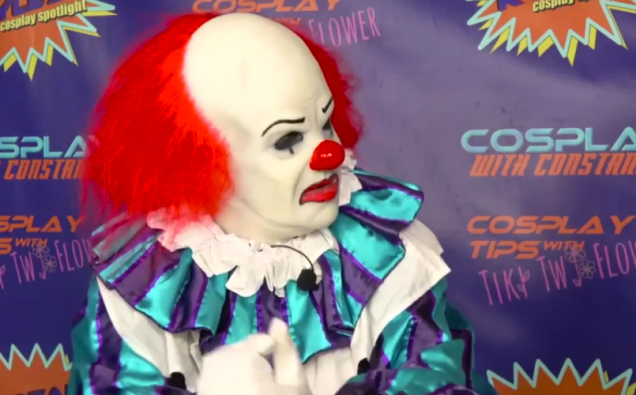 Cosplay, what is it? When most people think of cosplay, they think anime, comic books, or Sci Fi characters. There is a whole subculture of horror cosplay that some people don’t even know exists. Cosplay can be a beautiful thing, art in it’s own way. Over my time I’ve seen some truly amazing horror cosplays, to the point of where I’m thinking “how in the world did they create that?” I’ve seen some cosplays that actually look better than the character they’re actually portraying.

This brings us to this week’s episode Captain Kyle’s Cosplay Spotlight. Since new episodes are released every other Monday, this week’s episode, of course, was released on Halloween. Naturally that means it was a horror themed episode. The episode includes Captain Kyle interviewing Pennywise the Clown. Then after that we get to meet the man behind the mask, one of the premier horror cosplayers as he talks about his experiences while cosplaying not only as Pennywise, but the array of other characters he does as well. Also in the episode watch as three characters battle it out in a game of horror trivia. In the interview segment, this week’s edition features an interview with The Rocky Horror Picture Show’s Barry Bostwick.

So head on over to Captain Kyle’s page HERE, there are hours and hours of content there. And if you’re just looking for horror, every week he reviews The Walking Dead in character as The Governor, so while you’re there, check that out as well.  And don’t forget to check them out on Facebook.

Remember, it’s just cosplay. Don’t take it too seriously and just have some fun. And a word of advice, the next time you’re at a horror movie convention, stop and talk to a cosplayer or two. Regardless of how intimidating their character may look, they’re some of the nicest people you’ll meet and would love to talk shop with you for hours. And trust me, they’re just as much an artist as anyone else.